Those Were the Days: Mary Hopkin’s ‘Post Card’ at 50 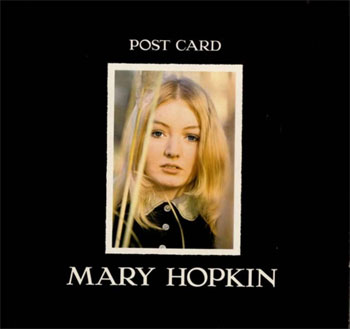 Mary Hopkin was a mere 18 years old when she was signed to the Beatles’ fledgling record label in 1968. That experience wasn’t her first as a recording artist; she had previously cut an EP of songs in the native language of her home country, Wales. When scenester/model Twiggy saw Hopkin performing on the TV show Opportunity Knocks—a ‘60s predecessor to 21st century shows like The Voice and America’s Got Talent—she recommended Hopkin to Paul McCartney, who promptly signed the teenager to a record deal.

McCartney brought Hopkin into the studio in July 1968 to cut a Gene Raskin song called “Those Were the Days.” Released in late August, the single rose to the number one spot in 17 countries worldwide. By February 1969 Hopkin released her full-length debut album, Post Card, again with McCartney in the producer’s chair and Ken Scott engineering.

Post Card was the seventh album released by Apple, and only the third not to be credited to the Beatles or one of their members (James Taylor and the Modern Jazz Quartet were the first two non-Beatles acts to release Apple LPs).

Post Card would be very much in keeping with the eclectic nature that was part of Apple Records’ brief; alongside the MJQ’s third-stream jazz, Taylor’s singer-songwriter style, Ravi Shankar’s Hindustani music, Billy Preston’s gospel/soul, the Yellow Submarine soundtrack and John and Yoko’s avant garde Wedding Album, the recording and release of the Welsh waif’s folk and vintage pop made for a kind of sense.

Hopkin’s Post Card included 14 songs, chosen from a variety of sources. Unlike some other Apple releases—Jackie Lomax’s Is this What You Want? for example, released weeks after Hopkin’s debut—Post Card doesn’t list any of the musicians involved, either on its LP jacket or a printed inner sleeve. It’s widely accepted that McCartney and Donovan (Leitch) played on the record; bootleg tapes exist of the pair jamming on acoustic guitars in off-moments during the recording sessions.

Donovan’s “Lord of the Reedy River” opens the vinyl album. Hopkin’s high, crystalline voice is accompanied by little more than an acoustic guitar, with occasional strums of an electric. The tune has a contemplative, slightly mournful feel. Donovan would later record the song himself for his 1971 LP HMS Donovan. Kate Bush covered the song a decade later in 1981.

Another Donovan tune, “Happiness Runs” features some intricate picking, with Hopkin reaching into her upper vocal register. A economical flute, clarinet and and brass arrangement follows along, taking a more prominent role in the song’s second half. A bass guitar (possibly McCartney) lays out a simple descending pattern. In the tune’s second half, Hopkin’s vocal is overdubbed several times for a pleasing chorus effect. Donovan would release his own recording of “Happiness Runs” a few months after Hopkin’s version, on his August 1969 album Barabajagal.

British dance band composer Ray Noble wrote “Love is the Sweetest Thing” in 1932 for singer Al Bowlly; Hopkin was at least the 14th artist to cover the song, following versions by Bing Crosby, Dinah Washington, Mario Lanza and Mel Tormé. The Post Card arrangement of the song is very much in a traditional vein, with syrupy strings evocative of formal dress and shipboard romance. McCartney had by this time expressed an affinity for this kind of prewar tune, with the White Album’s “Honey Pie.” He’d return to the style several times throughout his solo career, most notably on “You Gave Me the Answer” on Venus and Mars and “Baby’s Request” from Back to the Egg.

English poet and children’s writer Ted Hughes co-wrote “Y Blodyn Gwyn,” Welsh for “The White Blonde.” The song’s melody is largely carried by a harp or dulcimer, and Hopkin’s overdubbed voice features two vocal lines—sung in Welsh—weaving gracefully about each other. 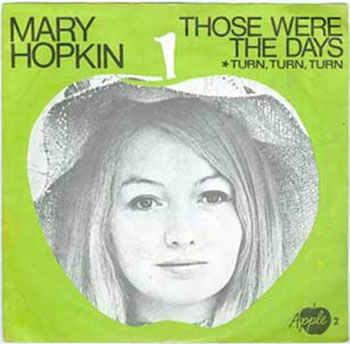 Five songs in, Post Card takes a turn away from folk and standards and toward pop. “The Honeymoon Song” was part of the Beatles’ early repertoire; they performed it on BBC radio’s Pop Go the Beatles in July 1963. Hopkin’s reading of the 1959 show tune is a shimmering piece of folk-pop. And though we can’t be certain, once again it certainly sounds like McCartney on bass.

“The Puppy Song” takes things back in a vintage pop song direction. The soft shoe number was written for Hopkin by the artist the Beatles had previously named their “favorite American group,” Harry Nilsson. Nilsson cut his own version for Harry, released in August 1969.

A minimalist classical combo provides backing for the melancholy “Inchworm.” As Hopkin trills along, cello and harmonium accompany her. A ghostly vocal chorus is mixed low in the arrangement of the 1952 Frank Loesser song, originally sung by Danny Kaye. As the song nears its end, lugubrious strings fade in and out of the mix.

The third of three Donovan tunes on Post Card, “Voyage of the Moon” opens the LP’s second side. Hopkin sings the first 30 seconds of the song unaccompanied; after that she is joined by courtly acoustic guitar picking. The song ends with Hopkin solo singing once again.

The Tin Pan Alley standard “Lullaby of the Leaves” features some of the most interesting guitar work on Post Card, with a Spanish-feeling melody that stands on its own, separate from Hopkin’s lovely vocal. Easily the most complex musical piece on Post Card, the song is one of the few in which vocals and instrumentation receive equal weight. Only as the song fades can a drum part be heard in the mix.

In its original form, “Young Love” was a typical 1950s pop song. Its arrangement for Post Card is much more in the folk rock idiom, suggesting to listeners what Hopkin might have sounded backed by We Five. Backing vocals (perhaps by someone other than Hopkin) and a sprightly rhythm section make “Young Love” a strong contender for the best tune on the record. Keen listeners might note a resemblance to phrasing and melody of the Beatles’ “Girl.”

The original UK pressing of Post Card included another standard, “Someone to Watch Over Me.” For the U.S. release, that song was dropped, replaced instead by “Those Were the Days.” In keeping with common British practice, the latter hit single was not included on the British LP. Hopkin’s “Those were the Days” was itself the product of a new Raskin lyric set to a Russian folk tune. The song’s gypsy/folk arrangement, vaguely klezmer air and Hopkin’s singalong delivery all combined to make the tune a hit. Producer McCartney got Hopkin to record several different vocal tracks of the song in various languages including Spanish, German, Italian and French. 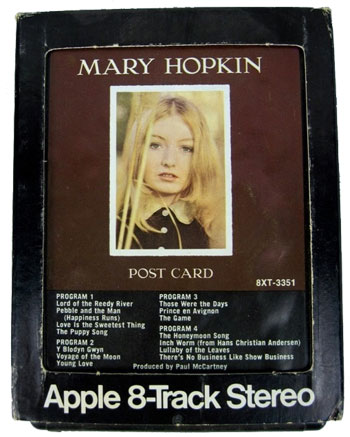 A prolific French songwriter nonetheless little-known outside his own country, Jean-Pierre Bourtayre wrote “Prince en Avignon,” a tribute to actor Gerard Phillippe. Hopkin sings the song in its original French. The sentimental arrangement is very much in the style of Françoise Hardy’s pop songs of the era.

Post Card closes with “There’s No Business Like Show Business,” listed on the sleeve as “Show Business.” A finely textured arrangement folds in brass, strings and a rock rhythm section. Yet despite the spirited instrumental backing, Hopkin remains the star of the show for this perfect set-closer.

Mary Hopkin would follow up Post Card for Apple Records with Earth Song/Ocean Song in 1971, produced by new husband Tony Visconti. After that album’s release, she left the label. Apple recycled/compiled her material on The Best of Mary Hopkin (UK only) and Those Were the Days, both released in 1972. A 2010 expanded reissue of Post Card restored the UK track running order, added “Those Were the Days” as the lead-off track, and added several bonus tracks including the non-English mixes of “Those Were the Days” plus a reading of “Turn, Turn, Turn” and a non-album single, a soaring version of Paul McCartney’s “Goodbye.”

Today at age 68 Hopkin is still active musically; her new recording of “Those Were the Days” was released in 2018 to celebrate the original’s 50th anniversary.