Where But for Caravan Would We? A Look Back at Caravan’s debut LP 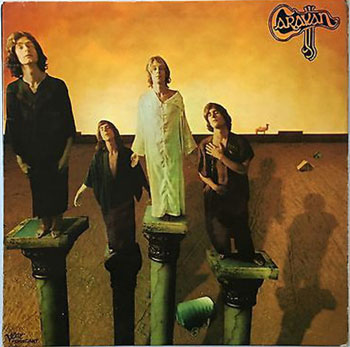 By 1968, the burgeoning musical underground in England was attracting notice in wider circles. Thanks to the success of ambitious works like the Beatles’ Sgt. Pepper’s Lonely Hearts Club Band, the Moody Blues’ Days of Future Passed, Pink Floyd’s The Piper at the Gates of Dawn and Procol Harum’s debut album (to name but four of many), record company A&R men were more receptive to lesser-known artists making music that lay outside the three-minute pop song norm. Even bands that drew inspiration from (and sometimes actually played) jazz would find themselves being eyed by record labels keen to capitalize on the public’s growing interest in boundary-pushing music.

In the southeast of England, the city of Canterbury was home to a thriving musical underground of its own. Combining elements of avant-garde music, jazz, psychedelic and progressive rock, the so-called “Canterbury Scene” would give rise to a number of band gaining widespread critical (if not commercial) success. Thanks in some part to their early association with Pink Floyd, Soft Machine would go on to become the most widely appreciated band from the Canterbury Scene, but other acts of note would include Camel, Egg, Hatfield and the North, Khan (featuring a young Steve Hillage), National Health and Caravan.

The last-listed of those, Caravan, was formed in 1968 by four musicians—Richard Coughlan, Pye Hastings, and brothers David Sinclair and Richard Sinclair—who had played in the Wilde Flowers alongside other musicians who went on to launch Soft Machine. While Caravan never truly broke through on a large scale, the band’s work—especially its albums released through the middle of the 1970s—are highly regarded among progressive rock fans. The band received even less notice in the United States, though (if nothing else) its album cover art became familiar to millions of listeners thanks to being reproduced on Decca Records’ promotional inner-sleeve jackets along with titles by John Mayall, Keef Hartley and other British acts.

Prior to the relative breakthrough of Caravan’s classic third album, 1971’s In the Land of Grey and Pink (on which the group perfected its developing style, exemplified by the masterful side-long suite “Nine Feet Underground”), the band released two superb albums that found it working toward a signature approach. Caravan’s self-titled debut album was released mere weeks after it was recorded in London’s Advision Studios with producer Tony Cox. All of the tunes on Caravan would be group-composed.

The album opens with “Place of My Own.” Dave Sinclair’s distinctive organ tones form the basis of the tune. Pye Hastings’ gentle, upper-register lead vocal is its centerpiece, while Richard Coughlan’s inventive drumming holds things together. Even though the track runs a mere four minutes, Sinclair’s expressive and tonally varied organ solo takes up a significant share of its run time. The group would perform the song on taste-making DJ John Peel’s “Top Gear” BBC radio program in 1968; an off-air recording of that performance would appear on the 2007 Caravan compilation The Show of Our Lives: Live at the BBC 1968-1975.

The first 90 seconds “Ride” feature little more than Hastings’ vocal and Coughlan’s drumming; after that, the song explodes into a gurgling organ solo, subtly supported by Richard Sinclair’s bass guitar. Hastings engages in a bit of scat vocalizing as the song fades. Despite Caravan’s subsequent reputation as a jazz- and prog-flavored outfit, this tune—like most of the others on Caravan—feel more like pop songs delivered with a jazz/prog sensibility and a focus on instrumental work. “Ride” was also performed on Peel’s radio show in 1968.

First heard here on the band’s debut album, “Love Song With Flute” would go on to become a Caravan standard. Hastings’ brother Jimmy guests on the titular instrument. Initially a model of subtlety, the song features some quiet strumming from Hastings, joined eventually by organ, then bass, then massed vocal harmonies. After a minute, it transforms into a catchy jazzy number reminiscent of Brian Auger. The flute finally shows up in the second half of the tune; Jimmy Hastings is trilling away in a manner not unlike Ian McDonald would do the following year with King Crimson. Often a part of Caravan’s live sets, the song would sometimes—for obvious reasons—be retitled “Love Song Without Flute.” Caravan played it in exactly that fashion on a 1971 BBC program, “Sounds of the Seventies.”

Avant-garde percussion, thumping bass and chiming, churchy organ are some of the highlights of the off-kilter “Cecil Rons,” a demented tune that at times sounds like something from The Cheerful Insanity of Giles, Giles and Fripp or a tune by the Bonzo Dog Doo-Dah Band crossed with John Entwistle. But Caravan’s pop inclinations give the song a catchy vocal chorus that keeps it rooted in a kind of accessibility, ‘68 style.

The second side of the Caravan LP leads off with “Magic Man.” A laid-back, echoey vibe characterizes the mid-tempo tune. Intentionally gauzy production and arrangement give the song a languid, psychedelic haze, but the melody itself its a simple folk-pop one. Dave Sinclair’s shimmering organ work flits in and out between the vocal lines.

“Grandma’s Lawn,” too, is built around Sinclair’s organ playing—here reminiscent of Richard Wright’s Farfisa work for Pink Floyd—while Hastings’ chunky guitar takes its most prominent appearance on the album here. He even engages in a brief bit of wah-wah work. Richard Sinclair takes his second of two solo lead vocals. The tune’s chord progression strays from pop convention.

The closing nine minutes of Caravan are filled by the thrilling and inventive “Where But for Caravan Would I,” a tune composed by the group plus Brian Hopper, saxophonist and brother of Soft Machine bassist Hugh Hopper. More than any other tune on the band’s debut release, it points the way toward future Caravan works with its multi-part approach, effective use of sharp musical contrast, odd meter, extended instrumental breaks and a dedicated emphasis upon memorable melody.

Despite its quality, Caravan didn’t chart. Like most all of the band’s albums, vinyl copies of the record are quite hard to come by today, especially in America; an original vinyl pressing of the LP commands about $300 on the used market, assuming one can even locate a copy. British pressings routinely sell for half again as much. Caravan has received a number of CD-era reissues; a 2015 UK release combined the monaural and stereo versions of the album onto a single CD, adding an early single, “Hello Hello.”

The band’s lineup shifted with most every album; in 2019 Caravan remains active, with Hastings leading a lineup that includes several longtime members but no other original band members. Caravan’s most recent release of new material is 2013’s Paradise Filter. Caravan’s 50th Anniversary Tour this year includes dates in Poland, Germany and (of course) England.