Album Review: Chocolate Watchband — This is My Voice 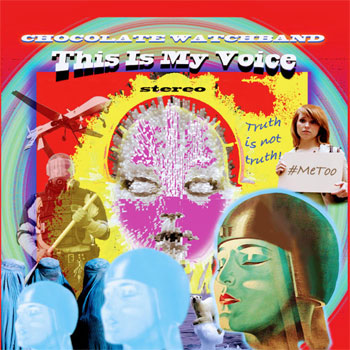 Exemplars of 1960s psychedelic garage rock, San Jose, California’s Chocolate Watchband nonetheless suffered greatly at the hands of the band’s label and (to a lesser extent) producer. Over the course of the group’s three albums of that era, not once did the members find themselves free to make an album that honestly reflected the band’s sound. In fact many of the tunes on their records were written and performed completely without the group’s involvement. Further complicating matters, some of the “fake” Watchband tracks—like “Expo 2000” from the band’s 1967 debut album No Way Out—are excellent.

The band’s best lineup didn’t even stay together through the ‘60s; frustrated with the machinations of the label, lead singer Dave Aguilar exited early. But the band’s legacy has nonetheless endured, thanks to the quality of much of the music, songs that at their best captured the zeitgeist of the psychedelic and garage-rock scenes. Even though Aguilar didn’t sing on “Let’s Talk About Girls,” a track memorialized on the Lenny Kaye-compiled Nuggets various artists collection, the band’s punky aesthetic still managed to shine through.

The band’s reputation and back story kept interest alive, though, and by 1999 the band—with many key members—was back in action. In 2012 the group released Revolutions Reinvented, a good-sounding collection of re-recordings of old Watchband classics. (That record was repackaged in 2015 as I’m Not Like Everybody Else.)

Moving away from recycling and toward proving that the band still has plenty to offer in terms of new material, This is My Voice features seven originals alongside covers of Frank Zappa, Bob Dylan, the Seeds (whose keyboardist Daryl Hooper guests on two songs) and the Music Machine. Mostly from the pen of Aguilar, the new tunes fit right in alongside the covers; the band’s snarling, musically muscular attack is every bit as potent now as it was on the band’s ill-fated first go-around.