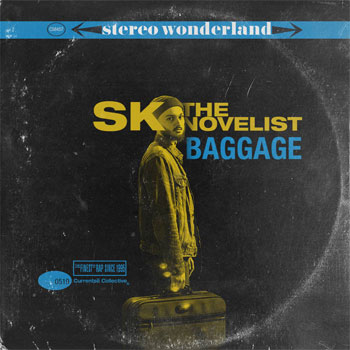 West Asheville hip-hop artist Sk the Novelist is a member of local rap collective the Legion of D.O.O.M. This Legion is kindred spirits of—but no relation to—the similarly-named mash up group/production team out of southern California. Sk (John Wilson) has been releasing music since at least 2014, when his EP Return of the Emcee featured “Let the Trumpet Tell the Story,” a track built around the melodic line from “The Battle Hymn of the Republic.” That work established Sk’s perspective, with lyrics such as “I want society to look more like piano keys.” It was followed by R.I.P. To the Boom-Bap in 2015.

His 2015 single, “Ugly Jazz” is pleasingly all over the map, shifting tempo, beat and style while delivering (occasionally NSFW) lyrics to re-emphasize his socially conscious messages about topics like “FOX News straw-man coverage.” In 2017 Sk released an album-length set, 10 Sk Tracks. That collection featured collaborations with King Garbage, C. Shreve the Professor and others, and made effective use of re-purposed snippets of older jazz grooves. It also included a humorous cut, “Beatleman” drawing from the lyrics of the Liverpool legends.

The latest release from Sk the Novelist is Baggage, a 12-track collection that once again finds the artist shifting between solo pieces and collaborations with fellow rappers. His Bandcamp page characterizes Baggage as “a variety of styles, built over the course of two years.” The centerpiece of Baggage is a rap battle between Sk and P.T.P., “Bones.” The subject matter here leans more in a traditional hip-hop direction, away from overt (or even subtle) sociopolitical statements and toward themes of personal empowerment. A representative rhyme from Sk’s first verse: “I’m aware of my energy, I’m an arrogant entity / Got a confident ambiance and a lyrical chemistry.” His rhymes are sharp and flowing.

A collaboration with Free the Optimus, “Woooo” feels like a party track, with Sk spitting out rapid-fire rhymes. A line like “party don’t start ‘till we show up” may not win points for originality, but there’s no reason to doubt the good-natured sincerity of Sk and FTO.

“All Yours / LIVE’s Soliloquy” reinforces Sk’s theme of variety; his vocals sound almost like the work of a different rapper, yet they’re not affected or forced; he seems to slip into different vocal personas with relative ease. Some Chipmunk-sounding sped-up vocals provide an intriguing contrast; they’re mixed far enough back to work as an aural effect without distracting from the central vocal line.

Baggage’s album cover art deserves mention. The “worn LP jacket” concept has been used many times before by countless artists in nearly every genre, but in this case it still seems fresh and fitting. Ricky Tale’s design hearkens back to classic jazz album art of the 1950s, specifically releases on Impulse! and Sonny Rollins’ Volume 2 album from 1957. The latter was released on the venerable Blue Note label, and for Sk the Novelist’s Baggage cover art, a modified version of the distinctive Blue Note logo (here with the phrase “the finest rap since 1995”) is a prominent feature of the design. So while Baggage has relatively little connection to classic hard bop jazz of the previous century, its cover design shows that Sk has a sense of history, and an interest in finding his own place within it.