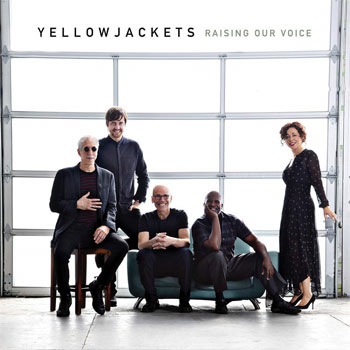 More than a dozen musicians have been members of jazz fusion band the Yellowjackets since the group was launched in 1977. But keyboardist and founding member Russell Ferrante says that there are common threads that weave through all of the band’s music. “A strong sense of pulse and groove, a balance of structure and spontaneity, a sense of evolution and development and an optimistic outlook” are distinctive characteristics of the Yellowjackets’ music, he says. With some pride, he mentions that there’s a class at the prestigious Berklee College of Music dedicated to the study of the band’s compositions.

Last September saw the release of Raising Our Voice, the Yellowjackets’ 24th album. And although the players may have changed over the decades, those common threads bind the group’s entire body of work. Ferrante says that the new album represents “who we are, and it reflects our aesthetic sense.” But at the same time, he acknowledges that the band’s character is constantly being refined.

Raising Our Voice revisits some older Yellowjackets tunes. The original version of the opening track, “Man Facing North” appeared on the group’s 1993 album, Like a River. While the ‘93 recording focuses on electric bass, the new recording places emphasis on impressive interplay between Bob Mintzer’s sax and Souza’s wordless vocals.

Luciana Souza is featured on Raising Our Voice, and the Brazilian jazz singer co-wrote two of the album’s tracks with Ferrante. “Luciana’s input was crucial in creating the new versions of previously recorded songs,” Ferrante says.

But most of the music on Raising Our Voice is completely new. “All the [new] music was written prior to going into the recording studio,” Ferrante says, “but we refined and shaped it during the recording process.” Many of the tunes weren’t originally slated to include vocals at all, but once the group entered the studio with Souza, Ferrante says that “we excitedly integrated her” into the arrangements. “She added another melodic voice to the band, allowing us to expand our orchestrational possibilities.”

Each of the four members of the Yellowjackets—Ferrante plus saxophonist Bob Mintzer, William Kennedy on drums and bassist Dane Alderson—is involved in projects outside the group. “Bob writes and records his own quartet and big band music,” Ferrante says. “I compose for and play trio gigs that are entirely acoustic in nature; Will has been playing some more rhythm and blues-oriented gigs on his own, and Dane has a weekly gig in Charlottesville playing a wide variety of music from rock to jazz.”

The group members bring those diverse backgrounds together to create the Yellowjackets’ sound, one that is firmly rooted in the tuneful and accessible end of the jazz spectrum. Raising our Voice explores a number of different textures, from Mintzer’s old-school “Swing With It” to the bop-flavored “Strange Time” to the impressionistic “In Search Of.” The latter makes subtle use of synthesizer, though one has to listen closely to hear it. “Acoustic piano was my primary voice on this recording,” Ferrante says. “I feel most expressive at the piano, but I still love the way synths can be used to help shape the arrangements.” 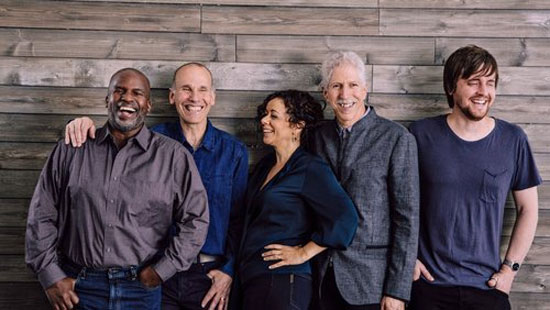 And the album ventures outside the jazz idiom completely on a pair of brief, minimalist instrumentals—“Emerge” and “Divert”—that are nearly ambient in nature. “Those pieces were primarily Dane’s creations,” Ferrante says. “We hope to continue to explore [that style] and further incorporate the entire band in a more substantive way.”

Over the years, the Yellowjackets have sometimes been pigeonholed into the “smooth jazz” category, a style that holds little credibility with critics or serious jazz aficionados. Ferrante takes it all in stride. “I acknowledge that some may label our music as ‘smooth jazz,’” he says, “but I think if you really open the hood, there’s a lot more going on than one might initially perceive.”

Part of the issue some take with smooth jazz is its formulaic nature. “I think some of that criticism [of the style] may be justified,” Ferrante concedes. But part of why he doesn’t believe the Yellowjackets fit into the category has to do with the intention behind the music. “We want to make music that will inspire, challenge, and last.”