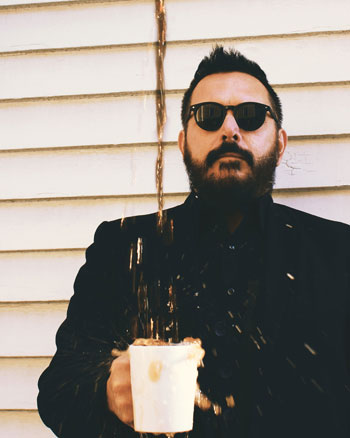 Morgan Geer is into a lot of things, musically speaking. He’s toured and recorded with Freakwater, the Handsome Family and other acts that exist on the edgy fringes of Americana. And since 2006, he’s also been releasing albums and performing as Drunken Prayer. Six albums in, Drunken Prayer has made its most diverse – and quite likely its very best – album, Cordelia Elsewhere.

Throughout his musical journey, Geer has adopted different approaches for each successive Drunken Prayer release. In addition to the basic guitar-bass-drums lineup, Drunken Prayer’s 2012 release, Into the Missionfield features fiddles, cornets, flugelhorns, saxophone, Hammond B3 organ and other instruments plus multiple vocalists. 2013’s House of Morgan, by contrast, is a one-man effort that’s as much noisy punk as Americana or outlaw country, but – somewhat uncharacteristically – there are synthesizers all over the tracks. “I love [all my albums] for different reasons,” Geer says with a laugh. “But it’s always interesting to me what other people gravitate toward.”

Listeners have a lot of choices where Drunken Prayer is concerned. And anyone who was confused by Geer’s constant change-ups on his first few releases would soon learn that he was just getting started.
I Intend to Comprehend the Devil & the Blues (2015) displays a traditional honky-tonk style, with a core roster of players that includes an Asheville rhythm section of Dave Gay and Lance Wille. Shifting gears yet again, 2018’s Morgan Geer’s Drunken Prayer is an unadorned acoustic solo record. “I’ve noticed that that’s become a pattern,” Geer admits. “There will be an album that’s more traditionally structured, and then the next one is inevitably just a little more off the wall.”

The artist readily concedes that he gets restless. “I’ll be into one thing, and then start to miss the other,” he says. “I try to keep it interesting for me, first and foremost, with the idea that I am asking people to pay for these things. I don’t live in just a bubble of whatever I happen to want to do; I want it to be enjoyable for other people, too.”

He succeeds on that score with his latest release. With the benefit of hindsight, each of Drunken Prayer’s previous albums seems like a step on the road to making Cordelia Elsewhere; the record adds up to a showcase of Geer’s unique set of talents and skills. Mixed by famed producer-engineer Mitch Easter, the album features like-minded players including Asheville multi-instrumentalist and producer Brian Landrum and bassist Erich Hubner. Cordelia Elsewhere blurs any perceived boundaries between Americana, folk, punk, rock and the singer-songwriter tradition.

Most of the album’s music was written several years ago, but Geer didn’t initially have much in the way of words. That would change suddenly. “We were driving across country – from the South back to Oregon – the day of the 2016 presidential election,” he recalls. “That gave me something to write about. All of a sudden, I had intense feelings about something. And I do my best writing when it’s almost therapeutic.”

Still, Cordelia Elsewhere isn’t an overtly political album. “I felt a real sense of urgency, because I knew this time was going to pass,” Geer says. “I’ve got a son, and [for him] I wanted this album to reflect the world through my eyes in 40 minutes.”

But he made a point of doing so without being too specific. “I don’t like to get too topical,” Geer says. “That doesn’t age well, and it doesn’t really scan well for someone who’s not walking in my shoes. I don’t like to read someone else’s diary. Like I said, you’re still asking people to buy the thing.” A representative example of Geer’s approach is “It Happens All the Time,” a tune that expresses unease wrapped up in an impossibly catchy, highly charged melody. “Four Leaf Clover” is an out-of-love vintage rocker that’s bouncy and fun, with a viciously funny chorus.

Geer – who shuttles between Oregon and North Carolina, but currently resides just outside Asheville in Emma – lives a life in music that’s in keeping with the family tradition. “The family business has been music since anyone can remember,” he says. “My grandfather had a big jazz band until the day he died, his father was a conductor, his mother was in the opera, and their parents were musicians coming over from Ireland.”

And although he writes to please himself, performing and crowd-pleasing is in Morgan Geer’s blood. His earliest memory is of being on TV. “I was sitting at my mother’s feet while she played acoustic guitar on Louisiana Public Television,” he says with a smile. “In my family, it’s always been an honorable pursuit to be a musician.”