Ghost-note: The Beat Goes On

In response to enthusiastic inquiries from fans, percussionists Nate Werth and Robert Sput Searight were inspired to launch their superstar side-project, Ghost-Note, in 2015. “Sput and I started taking drum solos together while on the road with Snarky Puppy,” Werth explains. “After the show, fans would approach us in awe and ask us how long it took us to rehearse that.” The duo decided to explore their unique chemistry—what Werth calls a “connection through rhythm”—in a new band. 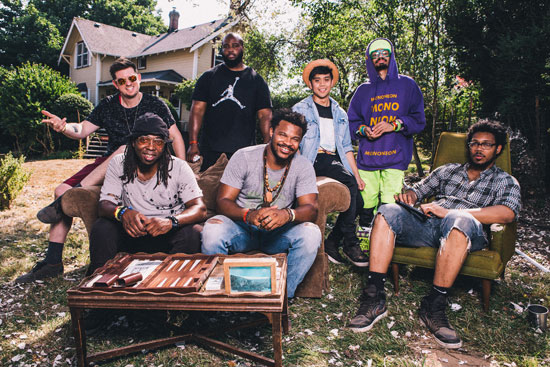 After an early lineup of the group didn’t work out—“we had a change of lineup in the band six weeks out from recording [debut album] Fortified,” Werth explains—the duo recruited former Prince sideman Dwayne “MonoNeon” Thomas on bass and guitar, A.J. Brown (whose credits include work with Snoop Dogg and Fred Hammond) on bass, and L.A.-based keyboardist Dominique Xavier Taplin (Prince, Toto). “We found some of the funkiest humans that we know,” Werth says. “And we’re playing night after night, trying to take music further and further, challenging ourselves musically while having a party at the same time.”

Ghost-Note also features a top-notch horn section that includes Mike Jelani Brooks, Jonathan Mones and Sylvester Onyejiaka. And that eight-member core group is often joined live by a rotating roster of guests that includes members of bands led by Justin Timberlake, Erykah Badu, Beyoncé, Jay-Z and other prominent artists. Both onstage and in the studio, all members contribute to the creation of the funky mix of sounds. “We don’t think about writing music within a specific genre,” Werth emphasizes.

That resulting sound doesn’t necessarily sound much like the music from any of those other names; Ghost-Note has a musical approach all its own. “We are all jazz musicians at our core,” says Searight. “So we always want to explore our music when we perform it live. Every night is another chance to connect on a deeper level with each other.”

While Fortified was a concept record (“a drum record with no drum solos,” says Searight), it was built through overdubbing. The band’s second release, Swagism, benefits from a different and far more organic approach. “We created Swagism with the entire band live tracking together.” Searight says. “It’s a whole new world of sound and approach, and it’s the way we want to make records in the future.”

The various members’ deep experience providing musical backing for others serves them well within the context of Ghost-Note. “You find yourself in the background of that situation,” Searight explains. “You always have to keep your solo shorter or a keep a bird’s eye view of the artist you’re supporting.” But Ghost-Note provides more creative latitude. “With this band, there’s a greater freedom of expression,” Searight says, “since we are all instrumentalists collaborating together, supporting one another.”

But he says that ultimately, Ghost-Note is as much about connecting with the audience as it is about communicating with each other. “In the end, we just want to create a vibe that the audience can connect with.”