Home  »  blues • interview   »   AJ Crawdaddy and the Language of the Blues

AJ Crawdaddy and the Language of the Blues 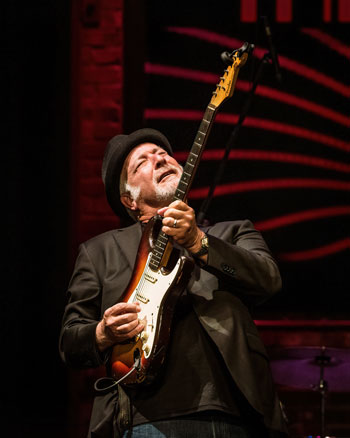 The West Coast blues tradition builds upon the styles and achievements of blues greats, with a healthy does of rock ‘n’ roll influence mixed in. A product of that tradition, Palo Alto-born guitarist Angelo J. Rossi – known to fans as AJ Crawdaddy – has been a fixture of the blues scene for decades.

Rossi’s formal introduction to the blues came at age 17, almost by accident. He bought a ticket to a Chambers Brothers show at Winterland. “They canceled, and a fellow by the name of Albert King came out on stage instead,” Rossi recalls. He was immediately impressed. “This big guy had a Flying V [guitar] that he played left-hand and upside down.” King launched into one of his signature tunes. “He played ‘Crosscut Saw,’” Rossi says, “and that was that.” He was won over by the blues.

That same year, Rossi’s mother bought him his first serious guitar, a brand new Epiphone Riviera. Rossi had already proved to his parents that he was committed to playing, so after having used a rented instrument for some time, he was thrilled to receive an instrument of his own. The gift took on special meaning, as his mother was suffering from cancer and died the next year. A half-century later, Rossi still owns and plays that treasured electric guitar.

“I fell in love with the ‘three Kings’ – Albert, Freddie and B.B. King,” Rossi says. “I saw B.B. King open for the Rolling Stones in 1968. He tore that stage up!” Growing up in the Bay Area,, Rossi took every advantage to see his blues heroes when they came through town. He was especially inspired by bands that included a horn section; that approach would greatly influence the direction Rossi would follow in his own blues journey.

Along the way, Rossi’s musical path found him playing in musical idioms well beyond the blues. When rock band Pablo Cruise wanted to add more musical muscle to its sound, the group recruited Rossi on guitar and vocals. Working with the band in studios like Sausalito’s famed Record Plant, Rossi became friendly with a wide variety of artists. “It was basically a family unit,” Rossi says. “Everybody hung out together, got stoned together, and worked on each other’s records.” Rossi’s backing vocals can be heard on Jefferson Starship’s Freedom at Point Zero album.

But his commitment to the blues remained strong. Even when onstage playing breezy, soft rock hits like Pablo Cruise’s “Whatcha Gonna Do?” and “Love Will Find a Way,” Rossi provided bluesy texture to the music. “Whenever I play, I always ‘blues’ something up,” he says with a laugh. “I just get sneaky. I have that ability to be able to sneak the blues in, no matter what genre I’m playing.”

These days, Rossi maintains his own studio, The Cave. And it’s there where he has recorded two albums to date under the AJ Crawdaddy moniker. The records – 2015’s Vaporized and Slow Cookin’ from 2017 – display Rossi’s love of the blues as well as his skill at showcasing the genre’s various styles. “I try to make well-rounded records,” he explains, “ones that aren’t just steeped in traditional blues, but that also touch on Chicago, Kansas City, and even West Coast blues. Because I’m a West Coast guy!”

Rossi’s music also draws from the jump blues tradition, a late 1940s style that music historians describe as a missing link between big band swing, blues and rock ‘n’ roll. Both in the studio and on live dates, Rossi uses a horn section – featuring select players from the region’s blues scene – whenever he can. But when he can’t, or when the music calls for something different, he calls old friend and harmonica player Jim Durrants. “Think of the harmonica as a poor man’s horn section,” Rossi says with a good-natured laugh. “It’s the ‘Mississippi saxophone.’”

Rossi has deep friendship with many in the Bay Area blues scene, and that’s a key to his popularity and success. Most of the musicians who play with him have been bandmates for more than two decades. “We’re playing blues, and that’s a simple language,” he says. “And it’s a very fun language.”