It may be difficult to remember all the details after all these years, but on the occasion of what looks to be his farewell-to-touring tour, it’s worth taking a look back to recognize the cultural phenomenon that is Sir Elton John. 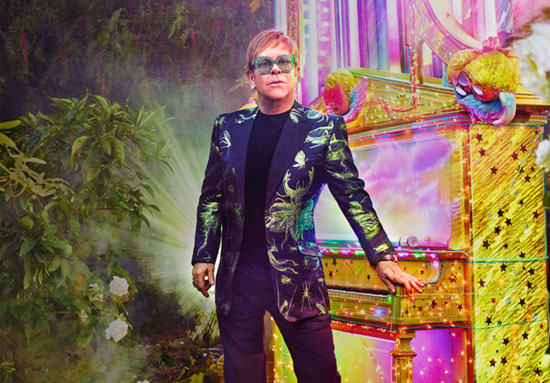 Trained from a young age at London’s prestigious Royal Academy of Music, John (then still known as Reg Dwight) was playing professionally in pubs with his own band by age 15. After a tenure as a staff songwriter and musician, by late 1968 he had formed the nucleus of the classic lineup of the Elton John Band. And after a slow start, John scored worldwide success with his self-titled second album in 1970.

Despite the uniformly high quality of his studio albums of the 1970s, it is as a singles artist that Elton John has gained the most acclaim. A list of his hit single releases would fill this entire article; among his most well-known worldwide smashes are “Crocodile Rock” from 1971, 1973’s “Daniel,” the title track to his classic 1973 double album Goodbye Yellow Brick Road, “Philadelphia Freedom” and “Island Girl” (both 1975) and his duet with Kiki Dee, “Don’t Go Breaking My Heart.” But there have been many, many others. For countless listeners, the sound of Elton John was the sound of the ‘70s and beyond.

Somewhat uniquely among popular artists of the 1970s, Elton John continued to score hits around the world through the 1980s and ‘90s. And a whole generation of fans who weren’t born when he first ruled the charts came to know him for his work on the soundtrack of Disney’s 1994 film The Lion King. After the tragic 1997 death of Diana, Princess of Wales, he released a hit remake of his 1974 single “Candle in the Wind” as a tribute to her. He was knighted in 1998. Even in the new century, no less than ten of his songs have made the Top 40 of the U.S. Adult Contemporary charts.

Elton John is that rare artist whose body of work has (to date) required three Greatest Hits volumes simply to catalog his successes up through 1987; there have been many other compilations of his work since that time. Today, with two of his original Elton John Band members (drummer Nigel Olsson and guitarist Davey Johnstone) and longtime associate Ray Cooper still part of his touring group, Elton John takes a well-earned victory lap around the globe.