Virginia and the Slims play a unique and often under-appreciated strain of American music. Jump blues and swing is a high energy musical style designed as much for dancing as for active listening. Guitarist Sean Anderson started the Asheville-based band in 2013, and since that time the group has built a loyal following with its fun, kinetic, uptempo sound. Anderson got his start as a blues guitarist, and put the band together to combine his love of traditional blues and hard-swinging dance music. Joanna Boyd Best is out front as the group’s lead vocalist.

(Note: Anderson left the band in late 2018; this interview dates from when he was still in the group.) 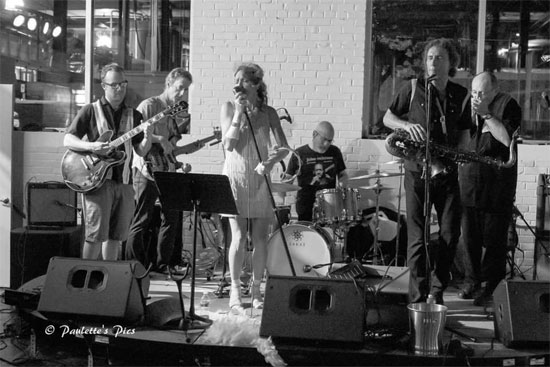 I think of swing and jump blues as the missing link between big band jazz and rock and roll. What’s your feeling on the subject?

Sean Anderson: I think you’re 100% right. It came about in the pre-bop period when a lot of the big guys in blues and jazz were recording and playing together. I got into it when I realized that when I played more uptempo, boogie woogie, toe-tapping stuff – with a swing in it instead of that straight rock beat, it really got people going.

Today the band features only you and saxophonist James Kamp from the original lineup. How have the changes affected the band’s overall sound?

Sean Anderson: We’ve gone for a fuller sound over time. We’ve always been blessed with really good players, but this rhythm section – Tim McCall [bass] and Marco Noto [drums] – is really excellent. And now we’re going toward a fuller horn section with Vinny Corda on sax and Bill Mattocks on harmonica.

Your repertoire primarily features classics from the swing era; do you write originals in that style as well?

Sean Anderson: We have a few original blues numbers that James Kamp has written; in addition to being our saxophone player, he’s also the singer/songwriter, plays guitar, plays harmonica. And we have a few songs that Joanna has written, too.

How do your audiences respond to the music?

Sean Anderson: We’ve noticed through time that our crowd has become people that want to come out and dance to what we’re doing. Here in North Carolina that [interest] comes straight out of the shag music tradition.

When you recruited members for the band, did you have to explain the concept to them? Or did they get it right away?

Different people had different levels of experience in it. Joanna – who’s more sort of classically trained – just saw it, and started exploring it, and got into it right away. But the common thread is that we all dig doing it. It’s such a fun style to play in front of people; it just draws people in.

What’s your favorite thing about playing this music?

Sean Anderson: There’s something about the style of playing that just sucks me in; I can listen to it all day. I think it’s the variety.

Joanna Boyd Best: I grew up a preacher’s daughter in the south. After fronting bands in Kansas City and then settling back in North Carolina, joining Virginia and the Slims was like finding home again.