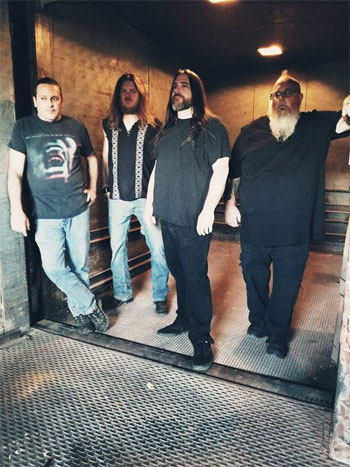 Holding a band together for more than a short time is a real challenge, as most musicians will readily admit. But Asheville-based four-piece group Mindshapefist has remained together harmoniously for more than fifteen years. The hard rocking band is currently celebrating the release of Road to Hell, its 7th full length album.

Like guitarists David Rogers and Anthony Brown, drummer Fred Hensley has been with Mindshapefist since the band’s beginning. In fact he and Rogers have been friends—and musical allies—since childhood. “I met David when I was 16 and he was 14,” Hensley says. “So it’s been pretty much a lifelong friendship and music collaboration.” The group’s newest member, bassist Josh Shook, has been in the band since 2006. That sort of lineup stability reinforces the band’s collective musical vision.

The members’ motivations for being in Mindshapefist have changed somewhat over the years, though. “When you’re in your teenage years, it’s, ‘Hey, girls like guys in bands!’” Hensley says with a laugh. Today he credits the band’s longevity to “a general love of music.” Noting that even though the members have all played in other bands, projects and hired-gun situations, Hensley says that Mindshapefist long ago discovered “a certain spark or synergy between us as four individuals when we get together, play music and create. That just doesn’t really seem to happen [for us] with anybody else.”

Hensley believes that musicians are always chasing the natural, ethereal high that comes from playing. “And finding that has been one of the constants with us,” he says. And as the band members have traveled through life—getting married, having kids—their experiences have colored the subject matter of the songs they write. “We’re kind of writing the background music, or the soundtrack, to our own lives,” Hensley says. He describes Mindshapefist’s music as “a kind of commentary of how we see things and how we feel about things at different points in time.”

The band’s current concerns, expressed on the new Road to Hell album, lean toward the personal. “David is the main lyric writer,” Hensley says. “He’s always been a very smart, well-read fellow.” The band’s lyrics on songs like “Half a Reason” deal in first-person terms with issues like betrayal. “I know what [our songs] mean to us,” he explains, “but I think that they’re open and interpretive to the general listener as to what they get out of it, too.”

On most songs, Mindshapefist’s thunderous musical approach underscores an aggressive tone. The rhythm section of Hensley and Shook executes the songs with remarkable precision; the two guitarists lay down a solid slab of chopping, distorted chording atop that foundation. Mindshapefist’s sound recalls Metallica and Motörhead, with the added twin-guitar lead approach favored by such ‘70s heavyweights as Thin Lizzy. But then there are tracks like “Waiting Room.” The opening minute and a half of that Road to Hell track features gentle guitar strumming and a lilting waltz melody.

“Some songs are more emotional, some are more ethereal, some are just more direct rock and roll and heavy groove things,” Hensley says. “There are a lot of wide and varied influences between us, and if you would come to our houses or listen to our playlist on our phone, I think you’d be really shocked at some of the stuff we listen to.”

That eclecticism is part of what sets Mindshapefist’s music apart. While Rogers’ lead vocals have a roaring quality, in recent years the group has begun to place great emphasis on vocal harmonies, too. “We have tried to do more layered harmonies live and on recordings,” Hensley says. “I’ve always loved King’s X and stuff like that, where a couple of guys are doing amazing harmonies together.”

Live onstage, Mindshapefist’s sound is a whirlwind of guitars, bass and drums. But the band’s focus on vocals is still a part of the experience. “We’re proud of what we do on the CDs, and we think they’re a good representation,” Hensley says. “But we’re definitely a live band; I think that’s where we really thrive. We just really love working with a crowd, putting that energy out to them and getting that energy shot back to us.”

Asked if he’s surprised that Mindshapefist has endured since start in 2003, Hensley laughs. “I always told Dave that we would do this for years, but it’s still refreshing—and yeah, a little surprising—to think about how long we’ve been doing it.” He suggests that the band’s collective hardheadedness is a contributing factor to its longevity. “And we just really enjoy the musical-making process between us. Sometimes you think, ‘well, maybe that stream of consciousness will run out at sometime or that source will be cut off,’ but it actually hasn’t,” he says. “I think it’s gotten even better and even stronger.”