Aaron Price: “It’s all music, and it’s all spiritual.” 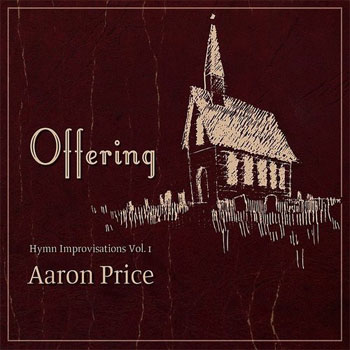 Aaron Price is one busy musician. He plays bass guitar and keyboards in the nationally-recognized tribute group Wham Bam Bowie Band; he plays barrelhouse piano in a duo with vocalist Peggy Ratusz; he collaborates with guitarist, singer and songwriter Jeff Thompson. But his latest project is an expression of his longest-held musical focus: an album of sacred music.

“Both sides of my family were pretty much church going families,” Price says. “So I guess the sacred music went hand in hand with my initial process of learning music at the piano.” He was a member of the Raleigh Boy Choir as well. But by the time he was in college, Price had seemingly left that kind of music behind. Yet once he returned to Asheville and opened his own recording studio, he was offered the job of Music Director at West Asheville Presbyterian Church.

“I never imagined I would still be doing this 15 years later,” he says. “But here I am. And these songs are still coming out of my fingertips and going to my mind.” Price’s newest album is Offering: Hymn Improvisations, Vol. 1. The album is an answer to numerous requests from parishioners. “Folks at the church have always encouraged me to make recordings of the improvisations that I do in the service,” he says.

One might not think that sacred music played in church would pair well with improvisation, a technique more readily associated with jazz. But in the capable hands of Aaron Price, the combination works. “I always start off referencing the truest sense of the melody and harmony that I know, specifically the way it can be found in the hymnal,” he explains. “I get centered by playing through the tune a couple of times, and then I use the feeling that it gives me as inspiration. I just let my fingers wander.”

Price says that he knows the tunes well enough – songs like “Precious Lord, Take My Hand,” “Great is Thy Faithfulness” and “Just a Closer Walk With Thee” – so that playing them is a kind of meditation. “I just empty my mind and let my subconscious and spirit guide me along in the improvisation,” he says.

People expect to hear sacred songs in a recognizable fashion, so Price can’t (and doesn’t) wander too far from the basic melodies. But even within the confines of well-known hymns, he manages to explore and convey his own distinctive musical personality. He compares his improvisations to holotropic breathwork: Price says that when someone listens to his take on sacred music, “I want it to be a very stimulating – and yet meditating and relaxing – experience for the listener.”

Aaron Price’s varied musical background manifests itself in some very subtle ways within the sacred improvisations. Midway through “How Can I Keep From Singing,” he inserts a quick flourish – lasting mere seconds – that’s very much in an African American gospel style. And his approach to “Happy the Home When God is There” has a feel reminiscent of early 1900’s music a la Stephen Foster.

“The stride piano style of ‘Happy the Home’ called to me,” Price says. “Although it’s typically a slow, plaintive hymn, one day I was messing around with it, and started to boogie. And I thought, ‘Oh, this works really well!’” He notes that although the songs on Offering each have their own style, when he plays them in church, they might be quite different. “I never play a tune the same way twice,” he says.

And though he approaches sacred music in a manner very different from, say, a David Bowie tune, in some ways the two styles aren’t as different as they might seem. “I’m sort of an adventurer,” Price says. “So everything that I learn goes into the same big giant bag.” And even at one of his secular gigs, he might bust out a sacred melody. “It’s really fun to juxtapose interesting tunes when I’m playing in public,” he says, “just to sort of show people – and remind myself – that it’s all music. And it’s all spiritual.”