Emma’s Lounge: All Over the Board

When it comes to making music, eclecticism for its own sake can be confusing for potential listeners. But when it’s executed with authenticity, casting a wide stylistic net can make for compelling music. And that’s the goal of self-described folk-wave group Emma’s Lounge. In celebration of the release of its new album, Confluence, the Asheville-based band hosted an “Interstellar prom” Oct. 13 at Asheville Music Hall. 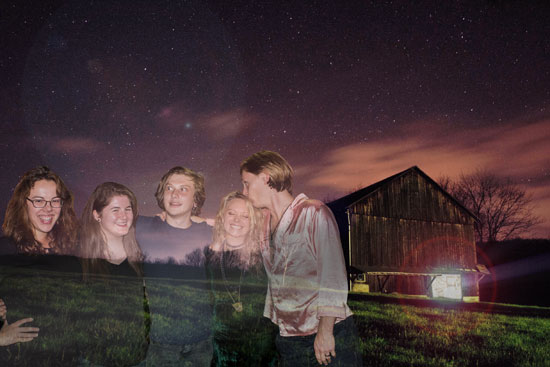 While Emma’s Lounge is in fact a group – featuring guitarists Logan Venderlic and Brendan Bower, keyboardist Meg Proffitt Heathman, drummer Mackenzie Richburg and Emma Forster on fiddle – its origins are a bit confusing. Essentially working solo in 2017, Venderlic wrote and recorded an album’s worth of songs at a studio in Ohio. Prior to releasing his collection of new tunes, the songwriter decided to assemble a group.

“That [album] was made before he even knew we existed, and before we knew he existed; it had already been mixed and mastered,” Heathman explains. “We needed a foundation to start on, so we came on, and we just all fell in love with his music.” When Heart Heavy came out in late 2017, the album was credited to Emma’s Lounge.

A year later, Emma’s Lounge reflects the creative input of all its members (along with Venderlic, Heathman is a primary songwriter), and that character is reflected in the title and sound of Confluence.

But the group’s character is now far more diverse than the Americana-flavored folk pop of Heart Heavy. To capture the live feel the musicians wanted, Emma’s Lounge returned to Ohio and cut the album live in the studio, with minimal overdubs. “We wanted it to sound the way that we sound,” Heathman says.

That sound can well be described as all-over-the-place. Two of the cuts on Confluence – the dance-funk “March” and the blues-with-fiddle “Breakdown” – sound as if they could have been recorded by two different bands. Elsewhere, “Arvilla pt. II” sounds like power-chording arena rock.

Two styles of music that don’t enjoy significant representation of Confluence are folk and new wave. So what’s with the folk-wave label? “Lyrically, our messages are rooted in folk,” Heathman offers. “It’s more of a perspective of where we’re coming from.”

And that message – come as you are – gave rise to Venderlic’s band name. “The name comes from a Charleston dive bar that no longer exists,” Heathman says. “No matter what you were going through or dealing with, there was always a warm reception as soon as you came through the door. And we want to have that same kind of vibe with our music.”

That easygoing vibe lends itself especially well to festival gigs. To date, Emma’s Lounge has played at quite a few up festivals and down the Eastern U.S. including the French Broad River Festival, the BIG What? in Shakori Hills, N.C., Toronto’s NXNE, Soulshine in Green Mountain, N.C., Meeting of the Minds in Schuylkill, Penn., Appleton, Wisconsin’s Mile of Music and the Sweetwater 420 Fest in Atlanta.

Heathman calls the festival scene a “creativity explosion. More than likely, festivals have had the biggest impact on the direction that we’re headed,” she says. “I feel like we’re in a music renaissance now; a lot of people are bringing authenticity and coming up with really unique ways to express themselves musically. It’s inspiring to get into that festival scene, meet other bands and listen to what they’re doing.”

Onstage, the band can stick closely to the studio arrangements or extend the tunes, jam-fashion, seemingly at will. “At one show we might sound like the studio [recording],” Heathman says, “and at the next show our songs might be mashed up with a cover.” When Emma’s Lounge does play the songs of other artists, they’re generally off-kilter choices. “Logan recently did a really awesome mashup of Justin Timberlake’s ‘SexyBack’ and Nine Inch Nails’ ‘Closer,” Heathman says. “We’re really all over the board.”

The group planned to play some of those covers and debut the new music from Confluence with an event it called an Interstellar Prom. Attendees were scheduled to vote upon and crown a non-gender-specific prom king and queen, and festive, space-age themed attire was encouraged. “It will be interesting to see what we’ve got cooking for that,” Heathman teased ahead of the show. “It will be a good time.”