For 17 years now, instrumental trio Free Planet Radio has been making its compelling brand of world music, suffusing jazz and pop forms with elements drawn from musical traditions around the globe. On its latest album, Stillness, the Asheville-based group takes a slightly different approach, crafting an album of contemplative, near-ambient compositions. Free Planet Radio celebrates the release with an Oct. 6 show at Isis Music Hall, showcasing new works and playing favorites from the group’s entire catalog. 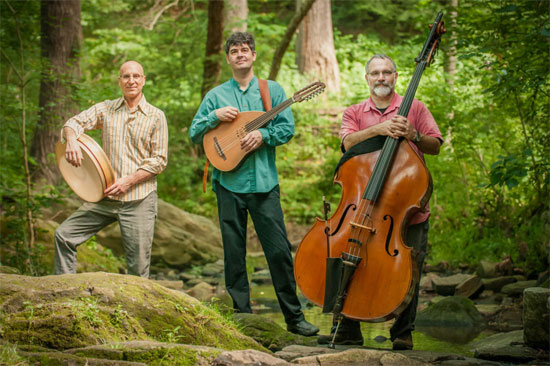 Percussionist River Guerguerian explains the new album’s stylistic departure from Free Planet Radio’s customary beat-centric style. “When we play live, our concerts can get a bit ‘notey,’” he says with a chuckle. “We play a lot of notes. But we have a really meditative side to our playing, too.” Placid, soothing works had always been part – but just a part – of Free Planet Radio’s live repertoire. Bassist Eliot Wadopian says that “people would often tells us, ‘Man, those were so wonderful. We would love to hear more of that.’”

Guerguerian, Wadopian and string player Chris Rosser were intrigued by the idea. “We talked about it for years,” Guerguerian says. “We finally hunkered down for two weeks last solstice time and put it together.” The process was more free-form than a typical Free Planet Radio recording session. “We came up with [musical] sketches; they weren’t as through-composed as our other pieces,” he says.

The secret to a successful collection of ambient music is to make it compelling. Guerguerian and his band mates sought to avoid what he calls a “kind of fluffy, new age stereotype.” He says the way to do that is to remove ego from the process. “This isn’t music that says, ‘Check this out; look at this cool thing that I could write.’ It’s really about trying to create a beautiful, lush pad that’s organic and fluid and a little improvisational.

“You don’t want to take people out of the zone,” Guerguerian says. “You want to provide a lush container that people can melt into.” The last thing he and his band mates want is for Stillness to lead listeners to think, “Oh, what’s that?” or “That sounds cool.” “Because ego will pop them out of it and put them into their mental/judgment state,” he says.

The idea behind Stillness is to help guide the listener into what Guerguerian describes as “the fine line between alpha and delta brainwave states. The music could be relaxing, but it’s also regenerative.” He explains that research by neuroscientist Daniel Levetan has shown that humans can’t really multitask. “If you’re doing five things at the same time, your brain is really just switching between all five things. And those switches can get burned out.

“So staring out the window for 20 minutes can be the most rejuvenating thing you do,” Guerguerian says. “Because in doing that, you’re letting all your synapses line up, and you’re creating these threads between all your neurons.” Stillness is intended as a complementary soundtrack to such regenerative endeavors.

“We didn’t want to get big, fancy grooves going this time,” says Wadopian. “With everything as busy and exciting as it is in this day and age, we thought a little calmness might be appropriate. Stillness is specifically designed for that.”

The album also presented an opportunity to make use of new instrumentation. “River wanted to use these fabulous handpans that draw individual listeners really deeply into the music,” Wadopian says. Guerguerian describes the tuned percussion instrument. “It’s a big metal thing – sort of like a steel drum – and you play it with your fingers,” he says. “It has a weird, ethereal sound; it kind of sounds like a synthesizer.”

That balance between soothing and energetic, acoustic and electric, will characterize the Stillness album premiere show. With a hearty laugh, Wadopian poses a not-at-all rhetorical question: “How do you do a CD release for a meditation record in a nightclub?”

Guerguerian provides an answer. “We’ll play four of the Stillness songs, a few classic things, and then we’ll play material that we’ve been working on for our next record. It’s our ja