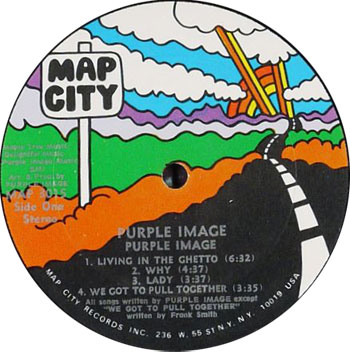 First setting up in Adams’s basement, the new group began work. To insulate the sound and avoid annoying the neighbors, Adams says, “I put out an edict that each member bring a mattress. We had eight mattresses on the walls and windows.” They worked collaboratively to develop a full arrangement of “Marching to a Different Drummer.” “We all had a very similar idea of what the song was saying not only personally, but as far as what society was during that period, the revolution and everything taking place.”

Now a name was needed. The group first tried to come up with something based on the number of people, but that went nowhere. “It might be better to be a color,” Adams suggested. They ran through a list of colors, and then Adams thought of a particular outfit of his, one he would wear in a (black-and-white) photo of the band featured on the back cover of the group’s eventual album. “So we said, ‘Well, purple! Purple what? Purple people, even? Nope. But there’s an image to those that see us and hear us.’ We put the two together and became Purple Image.”

Eight mattresses couldn’t quiet the roaring, groove-based sound Purple Image was making, so they had to move. The group eventually ended up in an unlikely space. “We rehearsed in a place that was actually a children’s daycare center,” Adams recalls. “They were renting out an abandoned car dealership that had a great big picture window. We had people walking by, and we didn’t know if they could hear us or not. We’d be there until 12:00 or 1:00 at night.” They might have gone later, but Adams had made promises to Moran’s and Payne’s parents that he would encourage them to keep up their school studies.

The group began to develop original songs, too; those tunes—like the stomping heavy funk of “Living in the Ghetto”—expressed the collective perspective of the group members. In fact, those songs would be the creative equal or better of the tune bestowed on them, the one that started it all. After workshopping at the daycare center/car dealership, Purple Image developed enough songs for an album. “The music would just take us where it took us, and without any difficulty,” Adams says. “All the songs developed were the true emotions and suggestions from each member of the band. That’s how all of our songs were put together: everybody had an emotion, everybody had a thought, and everybody had a process. And we gelled that into songs.” The band members knew they had something special.

While all of this was happening, Jacocks and Reed got a recording of Purple Image playing “Marching to a Different Drummer” and took it to influential Cleveland radio deejay Billy Bass. Bass was impressed; he started playing the song on his show. “It was just strange enough that people started responding to it,” Adams says. “It became the number one single in Cleveland for a whole week.”

Soon Jacocks traveled to New York City, where he visited Map City/De-lite Records, a label run by members of Kool & the Gang. Discussions went well, so he returned again, this time with the band in tow. “I remember we were all sitting there: Kool & the Gang, Purple Image, Bill Jacocks and Victor Reed,” Adams recalls with a smile. “The next thing we knew, we had a contract signed!”

The band cut the songs for Purple Image at Audio Studios back home in Cleveland; Map City released the album in 1970. Though the record features six songs, Adams reveals that ten were recorded. Asked if those unheard tracks might ever be released, Adams is circumspect. “We’ll let fate takes its course,” he says. Today original pressings of the record—most of which are marked as promotional copies—change hands for $150 or more. Unauthorized LP and CD reissues appeared in the 21st century, but the new Tidal Waves Music LP re-pressing is the only reissue sanctioned by the band. 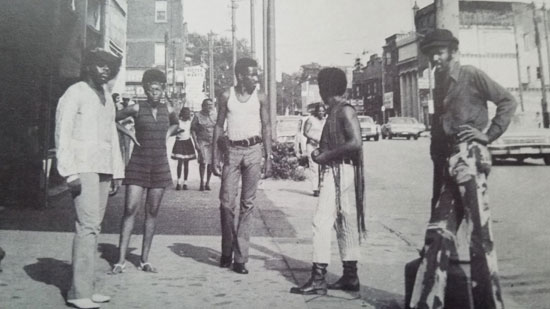 As the record was released, Purple Image found itself doing live appearances. “They had us going to Philadelphia, Cincinnati, Chicago,” Adams says. “We were doing all those American Bandstand type [local] shows that were happening on the East Coast.” Onstage, the band cut a striking image, one that helped expand its audience to include new fans, both black and white. “We always had buckskin boots, the flower child look,” Adams says. “It’s a beautiful look, right? And when we’d come out, we’d fill the room with our rhythm and sound.”

In addition to playing big halls and opening for high-profile artists, the band played the Piper Rock Festival in Akron, Ohio in May 1970. The first band to take the stage in the morning, Purple Image played to an audience of about 10,000. Other acts on the bill included Barnyard (an early version of Joe Walsh’s Barnstorm), Canned Heat, Kenny Rogers & the First Edition, the Rascals, Alice Cooper and Cold Blood. Heavy rains forced the cancellation of a set by the Byrds.

Yet despite the momentum gained through live appearances, a planned second album didn’t materialize. Sessions in Chicago collapsed, owing to disagreements with the producer over how certain things were to be recorded. The resulting tension spelled the end of Purple Image.

Today, several of the eight band members have passed on, but Adams stays in touch with his surviving former band mates. “We have camaraderie when it comes to many things, even in music,” he says. “There’s still a sparkle of who we are, and our musical thoughts.” And Adams carries many fond memories of the all-too-brief phenomenon of Purple Image. “When I listen to the songs, I can hear and almost tell you how they’re moving or where they’re standing,” he says wistfully. “It was always a very positive, very cohesive energy. We’d start completing each other’s sentences. It was almost scary, in a way.”

Adams jokes that with the new reissue of his old band’s album, he’s ready to go onstage and accept his Grammy award. After the laughter subsides, he turns more serious. “No, I’m as comfortable as I’ve always been, and in love with the world. And I hope everybody can find a way to do the same.” To underscore his point, Warren Adams quotes the title of one of his favorite tunes off of 1970’s Purple Image. “We got to pull together,” he says.

An edited version of this feature appeared previously in Goldmine.