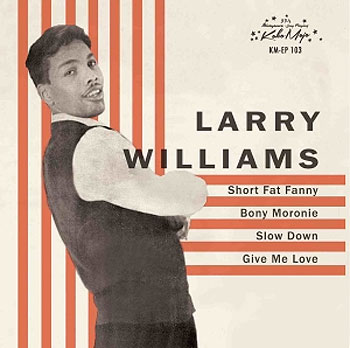 Larry Williams – Short Fat Fanny EP
Today, the name Larry Williams is largely known once removed, as the American rhythm and blues artist who wrote and recorded songs that would be revived by the Beatles, the Who and others. Their covers are now more well-known than Williams’ originals, but it’s worth going back to hear what inspired John Lennon and Pete Townshend. A new EP on the Koko Mojo imprint (a label whose motto is “good rockin’ blues from the dark side”) serves up four classics.

The 7: 45 r.p.m. record leads of with its title track, a 1957 side with honkin’ sax and a stompin’ beat. Williams lifts lyrics and song titles form most every popular act – Little Richard, Elvis, Jerry Lee Lewis, Carl Perkins – but he does so in such an unashamed matter that it’s difficult to hold it against him. The yakety saxophone break by Jesse James Jones provides a template for guitar solos to come. The Beatles noodled around with the tune during their Let it Be sessions, who knows: maybe it will surface n Peter Jackson’s upcoming film reboot.

The Who covered Williams’ “Bony Moronie.” Being the Who, they didn’t swing the tune the way Williams did, but otherwise their version is quite faithful. Larry Williams’ original is more dance-worthy, but then that’s what this music was made for. Electric guitar is more prominent here than on this EP’s other cuts, but it’s still the sax taking the lead.

The Beatles included “Slow Down” in their set from early days, releasing it on an EP of their own; here in the U.S. it surfaced on Capitol’s Something New LP. Those hearing Williams’ version for the first time may well be struck by just how similar the Beatles’ reading is to the original. They didn’t feel the need to change what is in fact close to rock ’n’ roll perfection.

If you thought the EP would toss in one ballad to change things up, you’d be wrong. “Give Me Love” features a manic, powerhouse presentation with insistent drums and chirpy chorused female backing vocals. It’s quite different from the other three cuts arrangement-wise, and less well known. But it’s a keeper.

Koko Mojo does a stunning job with the EP artwork which in nearly every way looks like a vintage EP from sixty-plus years ago. And resident liner note scribe Little Victor pens an informative mini-essay. The record provides fifteen minutes or so of pure delight; you can read the liners after the needle returns to its resting place. 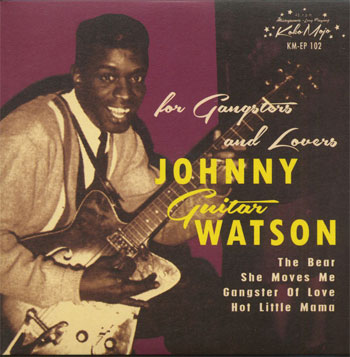 Johnny “Guitar” Watson – For Gangsters and Lovers EP
There could almost be two Johnny “Guitar” Watsons. The first was a blues/r&b artist of the late 1950s and early ‘60s; the second – from the late ‘60s to his death in the 1990s – was a more funk-soul oriented artist. They’re the same guy, of course.

The “first” one is best known as the artist who gave the world the song title “Gangster of Love,” later co-opted by Steve Miller in his hit single “The Joker.” The similarity ends there.

For Gangsters and Lovers is Koko Mojo’s vintage-looking EP showcasing some early sides from Watson. “The Bear” was a single, but apparently didn’t chart. It’s fairly standard-issue, upbeat r&b enlivened by a spirited vocal performance. “She Moves Me” is far better, a claustrophobic walking blues. Even when the big horn section comes in, the strolling vibe is super-solid, and Watson engages in dialogue with his (sadly underused) guitar. But during the sax solo, he rips it up on rhythm as much as humanly possible.

“Gangster of Love” starts out very much a Muddy Waters-style badass blues, but evolves into a swaggering r&b/blues hybrid. It’s full of humorous bravado, and listeners who’ve been waiting for a gutiar solo get their reward. “Hot Little Mama” leans pretty heavily on a big band sound, but since Watson gets to unleash his guitar prowess, all is forgiven.

It’s hard to imagine a more varied selection of early Watson tunes to cram onto a 7” vinyl platter. The packaging and liner notes (again by Little Victor) combine to make this disc simply essential.