Tellico: Courage for the Times

Formed in 2015 by three members of popular bluegrass band Dehlia Low, Tellico didn’t set out to be political. And while the group’s second and newest album, Woven Waters, isn’t exactly a musical-political treatise, its songs are informed by the division and unrest that characterize American life near the end of the 21st century’s second decade. 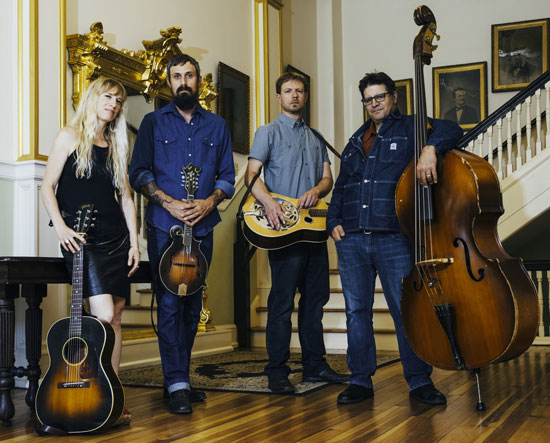 Vocalist, fiddler and guitarist Anya Hinkle emphasizes that Tellico didn’t approach the making of Woven Waters with an overall theme in mind. “We had a pool of songs, some unrecorded material to choose from,” she says. “The actual selection [is no more than] just a collection of songs. And if they reflect anything at all, it’s just where we are at this point in our lives. It’s not a concept album in the sense of chapters in a book or anything like that.”

Hinkle acknowledges that many artists are making political statements of late. “And I’m sure it’s no accident on our [album] either,” she admits. In fact, last November, Hinkle penned an essay for No Depression in which she explained the background of one of Woven Waters’s standout tracks, “Courage for the Morning.”

Recalling a trip to Japan mere days after the 2016 presidential election, Hinkle’s essay characterized the contrasting reportage of the election – Japanese news outlets versus ones at home in the U.S. – as “the difference between a nightmare and a bad dream.” She went on to reference Trump’s Twitter attack on American congressman and civil rights hero John Lewis as well as “the millions of people that faced overwhelming hardship in the face of an impossible political and social system.”

Remarkably, against that sobering backdrop, Hinkle wrote a song that expresses optimism. “’Courage for the Morning’ changed its meaning for me so much since I wrote it,” she says. “It’s interesting to notice how songs kind of take on their own meaning.” But the central concept of courage remains key to the song’s message.

“We listen to and enjoy music because it helps us make sense of our own lives,” Hinkle observes. “The meaning of the song, as opposed to being lofty or preachy in any way, is more of a call to action. Because every day there are always things that we can do to bolster up ourselves and others.”

Hinkle recalls listening to a rough mix of the song on her car stereo shortly after the recording sessions were complete. “ I was singing along and wondering, ‘What would it feel like if I heard this on WNCW?’,” she says with a laugh. And at that moment, the point of “Courage for the Morning” revealed itself in a specific lyric snippet.

“I was like, ‘If somebody would sing along to themselves, “I will walk, I will sing, I will bring a little courage for the morning,” to someone else, that’s it,” she says. So even in the face of unsettling news on the TV, radio and internet, finding – and sharing – courage is what’s important, Hinkle believes.

The band – Hinkle plus bassist Greg “Stig” Stiglets, guitarist Aaron Ballance and Jed Willis on mandolin – worked closely with celebrated Celtic musician, Grammy nominee and Asheville resident John Doyle. “We had the idea to cold-call him and ask him to produce,” Hinkle says, “And he said yes.” In addition to an extensive body of work including recordings and performances with many of the biggest names in Irish music, Dublin-born Doyle is skilled behind the recording console. Working with engineer David Arnold, Doyle produced Woven Waters quickly.

The album sessions in a Johnson City, Tenn. studio took place over 10 days. “We had studio time – and time with [Doyle] – that could only happen in that concentrated period,” Hinkle explains. “So it wasn’t like we could just record a couple of tracks and then come back two months later and record again.” Acknowledging that the band’s chosen method has good and bad points, Hinkle nonetheless believes “it’s one way great albums can be made.”

Tellico used a back-to-basics approach to recording, tracking live in the studio instead of layering individual performances. That approach is key to the record’s organic, you-are-there sonic quality. “Music happens at a certain time in a certain place,” Hinkle observes. “And where you are at that moment is captured there forever, strangely.”

The band’s new album weds the Appalachian storytelling tradition with a current-day Americana sensibility, but Hinkle is quick to recognize the limitations of song lyrics. “With a song, you’ve got to leave a lot to the imagination. If you really wanted to really tell a story, you wouldn’t do it in a song,” she admits with a chuckle. “You’d write a novel.”