EP Review: Patrick Ames – All I Do is Bleed 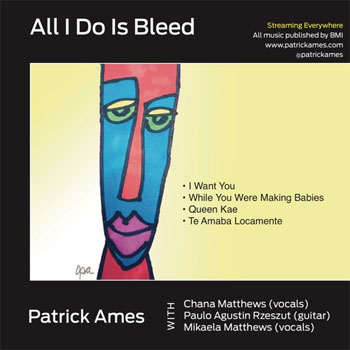 “I Want You” opens with a slightly mysterious-sounding acoustic guitar strum, quickly setting a mood. That mood s quickly shattered when Ames starts singing; his rush of words sounds more like a nightclub-era Woody Allen routine than a singer-songwriter. His lyrics are interesting enough, but ending each phrase with a whiny “aaaahhhh” seems an odd affectation. The backing singers (Chana and Mikaila Matthews) add a measure of professionalism to the proceedings, but the whiny vocal – mixed very forward in the arrangement – isn’t appealing. The gently picked guitar parts are nice enough, but – oh – those vocals!

“Queen Kae” is far superior, focusing on acoustic instrumentation and the backing singers’ (presumably) treated oooohhh vocals. The oddly bleated refrains of the title don’t add anything of value to the piece, though.

“While You Were Making Babies” is musically appealing, but its lyrics are beyond strange. The singer recounts to the object of his affection that while she was making babies, he was sitting on the couch. O-kayyyy. The vocal arrangement seems oddly thrown together, as if during the session, the (very skilled) harmony vocalists had access to the musical backing track but not Ames’ lead vocal.

“Te Amba Locamente” (“He Ambles You Madly”) is easily the best track of the four. Ames’ singing still won’t win any awards, but the Latin-flavored arrangement is appealing enough.

Verdict: a quirky and deeply idiosyncratic release that nonetheless may interest fans of outsider music.