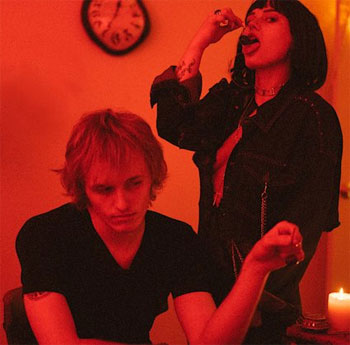 Bright, intelligent pop is the métier of Damon Mitchell. Fans of Owsley, Jellyfish, Ben Folds and similar purveyors of pure pop will find much to like in these six tunes. “Heist” sports some falsetto vocals that recall the best qualities of early Beach Boys, with a good bit of quirk added. The wonderfully melancholy “Just a Face” takes thing in a more contemplative direction, with a feel likely influenced by mid-sixties Beatles and/or the Paisley Underground movement. “License Plate” applies the same values to a subtly Americana-feeling tune complete with a fiddle solo.

“Salo” is a breathy singer-songwriter styled tune; as catchy and alluring as its melody is, Mitchell’s singing is the centerpiece of the song. Some unexpected chord changes pull the song outside of the pop framework, but a little musical ambition isn’t a bad thing. Slipping in a few lyrical bits from The Band’s “The Weight” is clever in this context, too.

The delightful “World in Her Eyes” is wholly unexpected. It sounds like Burt Bacharach and Herb Alpert dropped by the studio. Mitchell seems to meander a bit around the melody, but when that trumpet kicks in, all is forgiven (he does at least as well as Herb did on “This Guy’s in Love With You”). The EP wraps up with its title track, the rocking-est of the six cuts. Some tasty electric piano enlivens the arrangement, and the guitar solos provides two of the set’s best moments.

Fun/random fact: Nick D’Virgilio – formerly of Spock’s Beard and one of the best progressive rock drummers in the business – plays on three of this EP’s tracks. There’s little about Elise that falls into the prog category, but it’s a fine collection of pop nonetheless.