Ask most people who follow Americana and related styles of music what it is that Steep Canyon Rangers plays, and the most common answer you’ll hear is bluegrass. But ask a member of the popular, award-winning and long-running band based in Western North Carolina the same question, and the answer isn’t quite so simple. 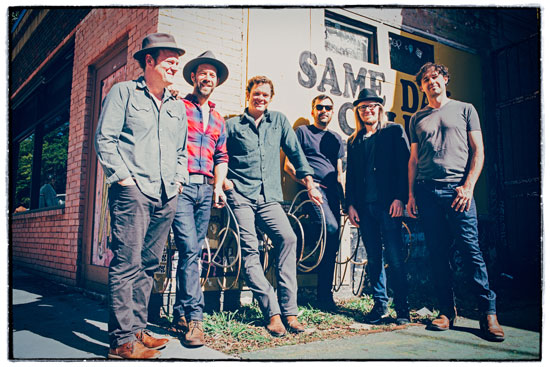 “I would hesitate to call what we do bluegrass,” says banjo player, singer and founding member Graham Sharp. “For me, bluegrass is just a little narrower than what we do.” But he believes that the music made by Steep Canyon Rangers remains very much in line with the spirit of bluegrass. “The last [several] years have been great about bluegrass reaching outside the genre, pulling other songs in and making them its own,” he says.

The manner in which bluegrass artists take songs from rock and pop and recast them in its own acoustic style is one of the genre’s strengths. “My favorite bluegrass has been stuff that did sort of reach outside the genre,” Sharp says. “And that’s kind of what we’ve always done.”

Though the current lineup is very close to the original 2000 one—currently it’s Sharp plus guitarist Woody Platt, Mike Guggino on mandolin, fiddler Nicky Sanders, Barrett Smith on upright bass and percussionist Mike Ashworth—time has seen some changes in the Steep Canyon Rangers’ approach. “When we first started, we were really focused on these 45-minute festival sets,” Sharp recalls. “You’ve got to go out there and know exactly where every song, every note, every joke is going.”

Today the band is both tighter and looser. All of the musicians have further honed their skills, and benefit from the time spent together playing on the road. “We really try to kind of retain some of that structure to our show and have it thought out so it really flows well, but we also leave places in the show where you don’t know what’s going to happen,” Sharp says. “We leave a little bit more room to stretch out and make it unique and keep it interesting for us … and hopefully for people listening, too.”

That spontaneity has added even more spark and texture to an already energetic and animated set list. Sharp describes the feeling he gets playing onstage with the Rangers. “You’re on the edge of the cliff, and you’re going to fly or you’re going to fall,” he says. “But you’re going to go, one way or the other.”

The band pays close attention to the kind of audiences it encounters. “At festivals, you’re [sometimes] playing for crowds that aren’t familiar with you, so you’ve got to shoot toward the middle of your repertoire and just kind of try to eat the heart out of it that way,” he says. When the band is topping the bill, it’s different. “You have room to push the edges of your music, or pull out stuff that you haven’t played in a little while.” Sharp says that the band enjoys both kinds of gigs; plenty of both are on their 2019 schedule.

The band’s current schedule also features several dates that continue the band’s successful run opening for the duo of Steve Martin and Martin Short. “It’s so much fun to be out there and be a part of what those guys are doing, and to watch them work,” says Sharp. To date the Steep Canyon Rangers have collaborated with Steve Martin on two studio albums (2011’s Rare Bird Alert and The Long-Awaited Album from 2017) and a 2014 live recording.

The Steep Canyon Rangers are currently touring in support of their most recent release, Out in the Open; the record claimed the number one spot on the bluegrass charts, the band’s sixth album to earn that top spot. But even longtime fans are likely to experience something new each time they see the group perform. “On my phone, I’ve got set lists for all our shows, going back a number of years, for each venue,” Sharp reveals. “So we’ll look at the sets that we played the last two years there, and keep things changing and changing. That keeps it interesting for folks who come back and see us, year in, year out.”