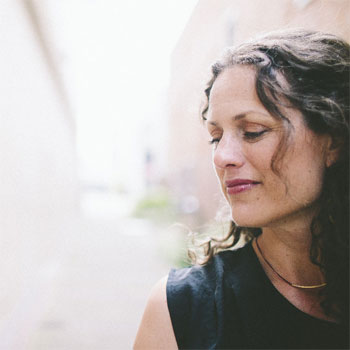 The approach of singer-songwriter Beth Wood encompasses more than just the rootsy end of the musical spectrum; one can hear rock, folk and more in her music. And in fact her creative endeavors extend beyond making music.

Part of Wood’s wide creative perspective comes from having spent time living in three very distinct locales. Wood grew up in Lubbock, Texas; there she was exposed to classical music, AM radio pop, FM rock and country music. In her teens, she moved east.

“I went to college in Brevard right out of high school, and I immediately fell in love with it,” Wood says. Even after leaving upon graduating, she says that she “ended up moving back to Brevard a couple more times.” Wood developed close musical ties with the band Jupiter Coyote. “They helped me get my start in touring and showed me the ropes,” she says.

So in a sense, Wood – who today lives in Portland, Oregon – is experiencing a kind of homecoming with her participation in the Songsmith Gathering at Brevard Music Center. With a character that’s distinctly different from most music festivals, the Songsmith Gathering fits in with Wood’s approach to music. “So many festivals are really big, with several stages,” she says. “And you can get lost in that.” In contrast, though the Songsmith Gathering has two stages, Wood notes that “The focus is on one thing at a time, which is great.”

And one of the most remarkable things taking place at the event is the Songsmith School. Working alongside Sarah Siskind (profiled in the May 2017 issue of Bold Life), Wood will lead a hands-on songwriting workshop. “Something really magical happens when a bunch of creative people get together,” she says. “You feel like you’re with your tribe of people, and there’s an energy that comes out of it that leaves everyone inspired.”

The workshop will include creativity exercises, co-writing and discussion of what does and doesn’t work. “Everybody will have a chance to hear each other with song circles, too,” Wood says. “Being able to take all that knowledge and start something with Sarah in Brevard is going to be amazing.” And even though Wood admits to being an introvert, she says that “using music as a connecting point is easy for me.”

Beth Wood’s upcoming release, the Kickstarter-funded The Long Road will be her 11th album. And though it’s a solo project, Wood says it doesn’t feel like one. “You’re doing something with all of these people who have signed on,” she says. “So, in many ways, it’s a collaboration.”

Taken together, writing, playing, singing and leading songwriting workshops are still not quite enough to express all of Wood’s creativity. So she’s preparing to publish a book of poetry – her second, in fact – Ladder to the Light. “Poetry and music are different train tracks in my mind,” she says with a laugh. “I keep a journal, and I write every day. And I can tell when I start writing if it’s going to be on the poetry track or the music track.”

Poetry and song lyrics “feel different, and are different,” Wood says. “Poetry has a different focus on form than song does,” she explains. “With song, you’re thinking about things like rhyme; my poetry doesn’t rhyme.” But Wood’s storytelling skills are on brilliant display in both idioms.

Ladder to the Light complements Wood’s first poetry collection, 2015’s Kazoo Symphonies. So 2018 sees the release of a new album and a new book from the woman described as a modern-day troubadour. And Wood doesn’t draw a sharp line between her two chosen forms of creative expression. “I like to weave in a few poems through my shows,” she says. “And that’s fun, too.”