A Look Back at ‘Redd Blood Cells’ 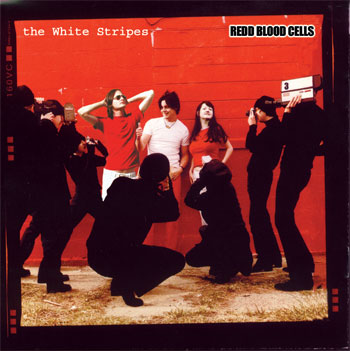 This is the third of three non-overlapping Redd Kross features. Enjoy. — bk

Way back in 2001, the White Stripes were riding high with the release of their third album, White Blood Cells. Though the guitar-and-drums approach had been explored decades earlier by bands like Flat Duo Jets (not to mention countless early blues duos), there was plenty of life left in the approach as the 21st century began. (The Black Keys certainly thought so.)

Skeptical listeners – myself included – may have heard the duo and thought, “What that group needs is a bass player!” And as it happened, an enterprising bassist named Steve McDonald – known primarily as the co-leader of L.A.’s Redd Kross – thought he could improve on the White Stripes’ record. So he did. Here – in his own words, some 16-plus years later – is Steve McDonald telling me (and now you) his story about his remaking of the White Stripes’ third album into Redd Blood Cells. – bk

Jack White loved it. There was a cool magazine in New York that doesn’t exist anymore called BB Gun, and he did an interview for that on Redd Blood Cells. The quote I remember the most from him was something to the effect of some people could think of this as an example of someone just trying to get famous off someone else’s fame, but he thought I was authentic and that he could “hear my pain” in what I was doing. He could hear my pain, which I took as a huge compliment!

And actually, I kind of had his permission before [I did it]. The White Stripes broke through to the mainstream on their third album and they had the hit song “Fell in Love with a Girl.” Around that time – Redd Kross had sort of gone on hiatus about four or five years earlier – I was in school studying music, and I wasn’t really actively in the music scene all that much. I wasn’t giving up on music, but I wasn’t all that hip … at least, for me.

So when I heard about this band with no bass player starting to break through to the mainstream with this sort of underground rock, I thought, “Well, shit. There’s a band that probably could use my services!” Or I felt challenged by the fact that they were having a career without my instrument, the bass, and maybe I might have felt a little bit threatened by that too.

And so, the spirit in which I did what I did was sort of like I was kind of skeptically, or taking down the young guns for a moment. I thought, “Oh, yeah, you guys are good, but you’re going to be better with me.” But in the process, I ended up understanding their trip more and became a fan.

What I did was, I took their White Blood Cells album, I put it into my ProTools computer software, and I added a bass guitar track to the songs. But what I did first was the first two songs on the album; I put them up on ReddKross.com the weekend that they were going to be in Los Angeles playing, and they were doing three nights at the El Rey Theatre right as they were starting to sort of take off.

So, it was pretty early days for that kind of proto-blogging, and I emailed the only contact they had on their website, which was their booking agent. And I said, “Hey, my name is Steve. I’m in a band called Redd Kross. I don’t know if you know who they are, but anyways, I just put your band’s music up on our website and played bass on it, and they’re playing L.A. tonight – where I live – and maybe they would want to talk to me. Maybe they have something to say to me about it.”

And so, Dave Kaplan – their agent, the guy I was writing to saying, “I don’t know if you know who I am” – had booked Redd Kross in San Francisco when he was a teenager in, like, 1982. So he was like, “Yeah, they want to say hi. Go down to the El Rey tonight,” and Jack was really cool. I mean, at different times Jack has famously been a hothead and sort of the kind of guy who would settle disputes in an old fashioned manner, and definitely not my style. And I kind of had no idea; I didn’t realize he could possibly want to kick my ass. But anyway, he was cool.

He probably thought, “Whatever,” because I’m probably eight years older or ten years older than Jack White, and eight years, in my opinion, is sort of like each generation, and in rock and roll terms is about five to eight years. So I’m like of the generation before him, and he’s a real purist about rock and roll. But he treated me with a certain amount of respect that I didn’t expect at that moment, and it was nice. And he said, “Oh, so people can hear this on the computer?” And I said, “Yeah. I mean, are you cool with that?” And he essentially said, “Yeah, you should do the whole record.”

I think he just thought it was cool that someone from my generation – someone who has ties to late ‘70s punk rock music – was shining a light on them in this strange and interesting way.

So, I went with that and I ran with it, and in my own little world, in my room, I tackled one song a week of their White Blood Cells album. And then I would post it; I would just put one song up a week for download, and I would write a little blog as if I had been in the White Stripes. I was talking about jamming with Jack and Meg. It was like they were the White Stripes, but I was their brother, and I changed the name of the album from White Blood Cells to Redd Blood Cells with two Ds.

I did that for about a month; I finished the album. And then for one weekend, I was going to have the entire record hosted at one time on the website. And when I put the whole thing up for a weekend, it so happened that the New York Times reviewed the album in the Arts and Leisure section and gave it a better review than Redd Kross had ever gotten! And because of this rave review in the New York Times there was crazy traffic on our website, and it crashed our server.

But it was fun. It was a fun little publicity stunt, but it was just like an art project, I guess. I didn’t really realize that I was doing something sort of early in the possibilities of the internet, where I was sort of interacting with someone else’s copyright, essentially, and altering it and making it my own and interacting with it in an interesting way.

The truth of the matter was, I was probably just kind of a bit out of touch and wanting to make my own statement: “I have a voice, too.” And that’s what’s motivating people in the comments section of different things. When people are exposing absolutely horrible sides of themselves and saying terrible things in the comments section. I supposed that was probably coming from a similar place, except I was being a bit more constructive about the whole thing and putting myself out there and making myself vulnerable by actually contributing my art to their art. I wasn’t just tearing them down. I was actually trying to show how they would be better with me.

But in that process, I learned to understand why they were so good as they were too, and it was neat. It was an interesting exercise, and totally weird.

There’s a full circle thing: [in 20202] Third Man Records is going to reissue Redd Kross’s Phaseshifter and Show World on vinyl, and that’s Jack White’s label! So little did I know that eventually, I would be actually interacting legitimately with these people … not just in a guerilla fashion.