This is the first of three non-overlapping Redd Kross features. Enjoy. — bk 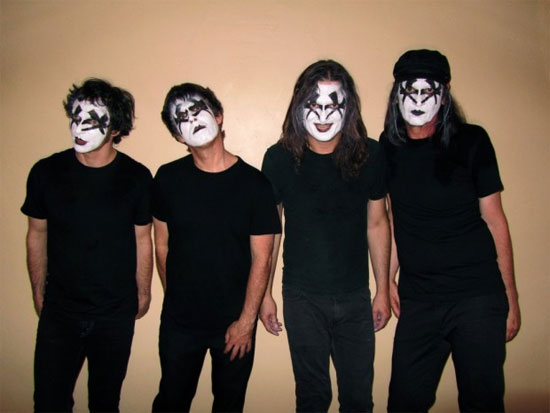 Since forming in 1980, Hawthorne, California-based Redd Kross has been expertly straddling the link between punk rock and power pop. And at its best, the band has erased the arbitrary line between those styles. Nearly 15 years after ending a lengthy hiatus, the band is still going strong with a tour, a new album in the making, and a pair of archival releases that remind modern-day listeners of Redd Kross’ trademark blend of inventiveness, humor and style.

The band’s name is an off-color reference to a notorious scene in the classic 1973 horror film The Exorcist. And that kind of bratty yet knowing plundering of pop culture is a signature approach for the group. “1976,” a standout track on the band’s 1990 album Third Eye, manages to parody mall culture, ‘70s fashion, Kiss and Elton John, all inside four minutes.

A working knowledge of mass culture adds to the listener’s appreciation of the band’s music, but bassist Steve McDonald insists that it’s not strictly necessary.

“I guess it’s sort of like the way people say that the Kinks were too English to be widely accepted like the Stones and the Beatles in the U.S.,” he observes. McDonald describes the Redd Kross approach to music. “We’re holding trash culture and mainstream culture in some sort of high esteem,” he says with a laugh. “And in the process, [we’re] making sure that we stay underground.”

Redd Kross has indeed remained steadfastly underground and outside of the mainstream scene upon which it so often comments. Though the band had a brief brush with the major labels in the 1990s, its undeniably catchy and uptempo music never broke through, even on the modest level enjoyed by artists like Jellyfish or Matthew Sweet. McDonald has few regrets, and he has his own theory as to why Redd Kross never achieved major success.

“Some of it would be [the result of] choices we made and the timing in which we existed,” he offers. Ultimately, though he thinks that aiming for widespread commercial success wouldn’t have been in the best interest of the band co-led by him and brother Jeff McDonald. “Maybe subconsciously we knew that wasn’t really the right choice for us,” he says.

Ultimately, Redd Kross’ underground status does work in its favor. From its perch outside the mainstream, the band has been able to comment wittily on passing fads and fashions, while paying tribute to everyone from ABBA to David Bowie to Charles Manson to the New York Dolls. And the group has done it all while maintaining its own stylistic identity. McDonald believes that through it all, Redd Kross has remained true to its own unique musical aesthetic. “I don’t think that we ever made our music in a way that we didn’t relate to in order to take another stab at the roulette wheel,” he says. “We still always did our own thing.”

And as Redd Kross barrels toward the 40th anniversary of its formation, the band looks forward and backward at once. McDonald is reluctant to share details about the album due in 2019, but he offers a hint: “So far, it’s kind of a party album.” Acknowledging that current events have made it “such a tense and polarizing time for people out there,” he says that Redd Kross would “really like to invite people to have a good time for a while with us. Because we have to kind of refuel your spirit before you continue on with that fight.”

Redd Kross’ aesthetic vision draws from across the musical landscape. The band is closely allied with Melvins; Steve McDonald has played bass with the sludge-metal heroes, and Melvins drummer Dale Crover is now an official member of Redd Kross. Though the two bands’ styles might seem miles apart, they’re already planning a twin-headliner tour for 2019, with Steve and Dale doing double duty.

The band’s 1984 EP Teen Babes from Monsanto has just been reissued with five bonus tracks; it shows that Redd Kross’ focus on pop culture is equal parts irony and genuine appreciation. And Hot Issue, a new collection of previously-unheard tracks, demonstrates that Redd Kross has always had more good song ideas than the means to release them. Without a hint of hubris, McDonald compares Hot Issue to the Who’s 1974 collection of outtakes, Odds & Sods. “It’s our nod to your rarities collection,” he says. When it’s suggested that the album holds together like a collection of new songs, McDonald smiles. “Maybe that’s my brother’s loving, curating touch,” he says.