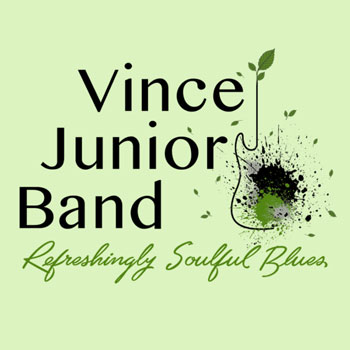 On one hand, Refreshingly Soulful Blues is a mightily odd title to give to an album; it reads more like sales copy or a review than a proper title. From the standpoint of truth in labeling, it does better, earning a 67% rating or better (refreshing, yes; soulful, yes; blues, sort of but not really). Still, a reviewer’s job is to focus upon the music, and the listener’s role is essentially similar.

The Vince Junior Band is an Asheville-based quartet led by guitarist, singer and songwriter Vince Floriani, Jr; the band plays … well, you guessed it. This 11-track CD features nine original songs and a pair of covers (one well-known, the other a relatively obscure choice). Recorded in Swannanoa at George Scott’s Juice Box Studio, the album’s sonic aesthetic is simple, straightforward and unadorned, exactly the right approach for an unassuming collection of comparatively laid-back tunes.

The music here has two primary unifying characteristics. The songs have a friendly, easygoing, playful and laid-back feel, the musical equivalent of a well-worn and supremely comfortable sweater. And the musicianship balances precision and note-perfect execution with a loose-limed and informal vibe, suggesting that everyone involved had a good time recording the songs.

That good time experience is communicated in such a way that it affects the listener. Floriani’s voice is almost conversational in its delivery, so even though he’s singing, it feels more like he’s telling the listener a collection of stories. For the most part, the lyrical subject matter on Refreshingly Soulful Blues is modest and human-scale; songs like “Step Sister” and “Camaro Sue” don’t concern themselves with societal ills or big-picture topics. Instead, they’re simply fun, appealing vignettes. And there’s not a thing in the world wrong with that.

The four musicians—Floriani plus keyboardist Noah Pitts, bassist Steve Frankel and drummer David Cohen (the latter at least as well-known for his editorial cartoon work)—play together in a manner that suggests they know each other very well; there’s the feel of an unspoken communication between them. The band’s approach is one that echoes celebrated American band NRBQ: an original sound that draws from country, pop, soul, rock, a little bit of blues, and other forms of Americana, but that can’t be described as neatly fitting into any one of those styles. For example, its title notwithstanding, “Color of Your Blues” displays shades of ska/bluebeat.

By definition, the record’s primary soloists are Floriani and Pitts. The keyboardist takes the spotlight most notably on “Tight Tonight,” where his electric piano textures move the song along and provide it with some complexity. Floriani shines brightest on an inventive reading of the oft-covered Jimi Hendrix standard, “Little Wing.” The Vince Junior Band’s version of the song sounds nothing like Hendrix’s original, nor, for that matter, like Derek & the Dominos’ or Sting’s covers. Instead, the band takes it in a different direction, one that effectively makes the tune fit seamlessly into a set dominated by original compositions.

That’s the strategy used for a cover of the Beatles’ “Don’t Let Me Down” as well, though the result is different. Stripping away the original’s signature electric piano part (played in 1969 by Billy Preston), the Vince Junior Band wholly reinvents the tune. The bouncy yet characteristically understated arrangement steamrolls through the nuances of John Lennon’s shifting tempi, instead favoring an almost reggae feel. The band’s cover will likely find more favor with those who haven’t heard the Beatles’ Let it Be original, but Floriani and band deserve credit at least for taking the risk of tackling the song.

Back on more solid ground, Frankel’s bass line foundation for “Shake Your Rig” won’t win any awards for inventiveness, but that’s not at all the goal here. His rock-solid bottom-end delivers a familiar melodic line that does exactly what it’s supposed to do: support the arrangement. The band’s playing is tasteful as ever, though—consistent with all of the tracks on the album—the understated instrumental approach means that Cohen never has the opportunity to lean into the beat, much less hit the drums with great force.

Refreshingly Soulful Blues is best described as a quiet record; its overall tone suggests that listeners in the same room as the band could carry on a conversation while the band played. Of course, doing that would be rude, and would make those in attendance miss out on some enjoyable tunes.