Los Angeles-based band Girlpool started out in 2013 with a stripped-down, clattering style that echoed Violent Femmes. But as the band has grown and developed, it has moved in two opposite directions at once: the group’s recordings have become more soothing and melodic (think Elliott Smith), and today, its onstage vibe often leans toward a punk aesthetic. The latter was on display when Girlpool played Asheville’s Grey Eagle in November 2018. 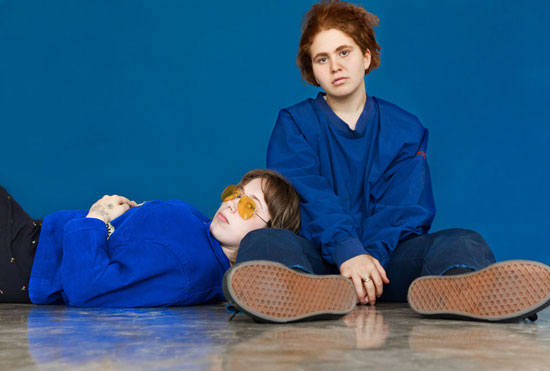 That marked contrast between Girlpool’s live set and the arrangements on its studio output are very much by design. “Each is like a different medium to play with and explore,” says bassist/vocalist Harmony Tividad. She explains the way in which she approaches live performance. “You’re in a community setting, and you’re feeding off this energy of other people. And that feels really crazy.”

But for Girlpool, the recording studio has a very different atmosphere. “There’s something more private about it,” Tividad says, acknowledging that the results will nonetheless be released to the listening public. Still, “It’s not really a shared experience,” she says.

While a Girlpool show is uptempo, often noisy and even shambolic, the band’s studio recordings are largely understated. One of Girlpool’s three recent singles is “Picturesong,” a soothing ballad that focuses on vocal harmonies and minimal instrumentation.

Guitarist/vocalist Cleo Tucker (“Cleo’s pronouns are they/them or he/him, not she/her,” the band’s publicist advised ahead of the interview) views the band’s split studio vs. live personality as perfectly natural. Live performance is “a cool opportunity to readdress something you’ve made,” he says. “Typically, we’re playing these songs long after we’ve written and recorded them, so there’s a whole different kind of context. Playing [a song] live gives you that opportunity to give it more of a specific energy that [maybe] was lacking in the recording.”

Another reason that Girlpool displays more energy onstage is its lineup. Originally, the group — co-led by Tucker and Tividad — had no percussion. “It was only two years ago that we added a drummer,” Tucker says. “And that [lineup] only lasted a few shows before we added another guitar player.” The increased instrumental firepower gives Girlpool the versatility to rock hard when it chooses to, and yet still bring things way down when a song calls for it.

Perhaps it’s counter-intuitive, but Tucker says that his songwriting style hasn’t really changed in light of having a full band. He notes that while on earlier releases — a 2014 self-titled EP and the album Before the World Was Big (2015) — songwriting was a collaborative effort between he and Tividad. More recently the two are writing individually. The 2017 album Powerplant and three singles released this year are the product of that more divided approach.

“Harmony and I have been writing our own music separately, and then sharing it with each other,” Tucker says. “We’re just kind of collaborating in a different way.” The queer themes that informed songs like Before‘s “I Like That You Can See It” are less overt on the band’s newer, more lyrically oblique material.

Girlpool’s increased touring schedule means that there’s less time for songwriting. “I love being on tour, and it’s really fun; I have such a good time,” says Tucker. “But in the back of my mind, every time I’m on tour, I’m thinking about how I wish I had the space and the ability to write the way that I feel comfortable writing. Most of the time — almost always — I just can’t get there when I’m on tour.”

Still, Tucker and Tividad found time to write the dozen songs on Powerplant last year, and at least three new ones (“Picturesong,” “Where You Sink” and “Lucy’s”) this year. The deeply textured “Where You Sink” showcases Girlpool’s vocal harmonies, with Tividad’s upper register contrasting with Tucker’s exploration of lower notes.

While the band has crisscrossed the U.S. many times on previous tours, almost always including a date in Atlanta, Girlpool’s current run of dates adds smaller markets like Asheville, Grinnell, Iowa; and Greenfield, Mass. Those scheduled shows, nestled between high-profile concerts in Chicago, Brooklyn, Detroit and Philadelphia, are strong evidence that Girlpool is expanding its audience.

Tucker shrugs at the suggestion. “I don’t know,” he says. “I just think we’re both super stoked that we get to go to cities that we’ve never even been to — or sometimes even heard of — and play a show and [have] people like the music. It’s pretty exciting to just be able to play music and have any kind of audience.”