You were 26 years old when you made Way Out West, but you had recorded nearly a dozen albums by that time. In those days, did you view recording sessions as a means of documenting a live performance, or was working in the studio different from playing live?

I started recording before I worked with Bob Weinstock and Prestige. I made my first recordings with a singer called Babs Gonzales. I think we made two or three albums. We did a few selections on Capitol Records; I don’t have those records, but other people have them. And there are some great people on there, like Don Redman: a really great arranger and musician. And J.J. Johnson.

So, I was getting used to the studio even before I started recording with Prestige. And I didn’t approach making the music any differently than I would for a live performance. Because for one thing, I’m a very free artist. My strength as a player was just that I’d play whatever came to my mind. I didn’t worry about anything else but being able to be in good shape and hoping that whatever I played would also sound good at the time. 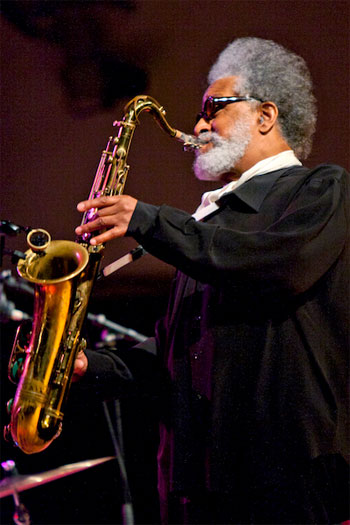 Tell me about the photo session for the Way Out West cover.

I was a big cowboy fan. See, as a boy, I used to go to all the cowboy movies; they were called two-reelers at the time. My uncle would take me. So, I knew all the cowboys: Tom Mix, Hopalong Cassidy, Red Ryder, Charles Starrett; all those guys. And there was no music; this was before music in movies. These weren’t silent movies. They were talking, but there was no musical track behind most of them. You just had the guys riding on the horses, and you could hear the hooves.

I met Les Koenig when I came out to California; that was my first trip out West, in 1957. They had me doing a record out in Hollywood, so I said, “Wow, I’ll have a chance to don a cowboy outfit!” So they got me a hat and the holster belt, and then we went out there and shot. Les Koenig, [photographer] Bill Claxton, and myself drove out to the Joshua Tree National Monument, in the Mojave Desert. It was a nice location. It took awhile getting out there, I remember, two or three hours.

It was a very groundbreaking album cover; it was very striking. Later, a guy from San Francisco — his name was Pony Poindexter — made an album dressed as a cowboy up on a horse [Pony’s Express, 1962].

I was playing the music that fit going out west. So, it all came together and it was very fortuitous. In fact, I got married out there. So captivated was I by the beautiful scenery — and she was a very beautiful girl, really — that the whole thing got me. Not only did I make Way Out West, but I also put a ring on a woman’s finger.

What motivates you to create?

The first thing is an appreciation and a love of the music. As I said, when as a little boy I first heard Fats Waller play, and I realized that, “Hey: this is it. This is what I want to do. I want to be a musician and sound like Fats Waller.” Of course, I never realized that might’ve been impossible, but at least I wanted to try to sound like him.

I remember sometimes when we’d do a job, and then when the concert was over, I’d go back to the dressing room and I’d work on something that I was doing during the concert. I was trying to figure it out. The band was leaving, the crowd was going, the guys were packing up the gear and everything, and I was back there playing my horn! You see? It has nothing to do with anything but trying to reach a pinnacle myself. It has nothing to do with whether it sounds great on the stage … of course that’s there, but the main thing is for me to achieve what I hear [in my head] and want to get to.

With regard to music, what’s the best advice you’ve ever received?

Oh, God. I’ve gotten so much advice. I can say that the people that I admired — and wanted to play to get their level — were all very encouraging to me. All of them. That gave me high opinion of my fellow musicians and their integrity and love of what they were doing.

But advice? I don’t know. When I played with Miles Davis, people would ask, “Gee, did Miles tell you to do this?” Miles would never tell anybody to do anything. He didn’t have to. If you’re playing up on the bandstand with Miles Davis, Miles doesn’t have to tell you. You’re supposed to know it already, or else you wouldn’t be there. See? So, it’s not what people tell you to do.

I’m sure I’ve gotten a lot of good advice, but I can’t recall anything in particular. I can recall, though, that these great musicians that I was privileged to play with were all great people, and they were all very encouraging to me. Music was the thing; if you could get to the music, that was your ticket to heaven. If you could play, they recognized it, and that was it.

The boxed set reissue of Way Out West is very nicely put together. Do you know if there are any plans to do similar reissues of any of your other work?

I don’t know. If they have something else to put out, sure. Why not? They want to make money and they can make money, so it’s up to them. As far as I’m concerned, I would hope that it sounds like something that I would appreciate. Other than that, that’s about the end of it.

See, I’m a very tough guy on myself. Just because it’s a Sonny Rollins album, I’m not running out to the store to get it. When you come to my home, I don’t have any pictures of Sonny Rollins on the wall.

You may also enjoy my previous interview of Sonny Rollins from 2016.