Lester Koenig’s original liner note essay on the back of the Way Out West record sleeve explains that you had never played or recorded with Shelly Manne or Ray Brown before the session. How did you come to know of each of them and choose them for the Way Out West sessions?

When I came out to California, I came out there with the Max Roach Band. Of course I had heard about Ray Brown. I’m not sure I had met him before, but I knew a lot of people in the Dizzy [Gillespie] band.

One of my all-time favorite recordings is a [1943] recording by the great Coleman Hawkins called “The Man I Love.” And Shelly Manne was the drummer on that. I don’t know if I met Shelly Manne before I came out to the coast either, but certainly his reputation preceded him. And I was happy to get a chance to play with both of them. 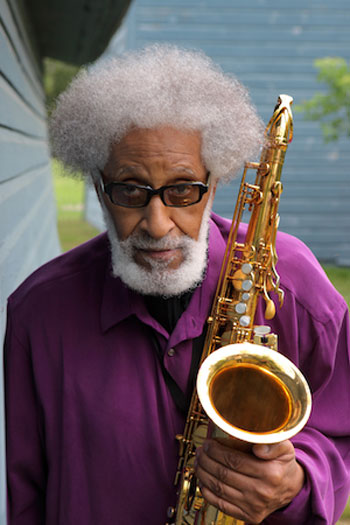 What preparations, if any, did you make with the two of them?

They were both working, and I think I was working also. After we played our jobs, we would meet at night and rehearse. So after work — maybe, I would guess at 2, 3 o’clock in the morning — we would go to a rehearsal studio in Hollywood with Les Koenig.

Way Out West was the first time that you recorded “strolling,” without the rhythmic underpinning of an instrument like the piano. According to the liner notes for the new release, that had only been done once before, on one song on a recording by Lucky Thompson in ‘56. What led you to employ that approach in a recording session?

Well, I think Don Byas also did a record that way with Slam Stewart. Very early on, when Miles Davis first heard me, I had a trio — saxophone, piano, and bass — and I was opening up for them at a club up in the Bronx. That was 1948.

I’ve always enjoyed creating my own harmonies and creating my own rhythm, and my own concept of the way the composition can be expressed. So for me, it was sort of a natural thing. I remember when my mother got me my first alto saxophone. I went in the bedroom, and I played, and played, and played. My mother had to call me: “Sonny, come on. We’re eating dinner. Come out of there!” The idea of playing by myself appealed to my musical instinct very much, and I’ve done that all my life. That’s something that comes to me very naturally, and so it was a natural way to want to record. And I happened to have that opportunity to do that.

There’s a quote in the original album’s liner note essay that reads, “Rollins himself realizes that he is not yet at the height of his powers.” Of course you were only in your 20s. Looking back now, can you point to a specific time in your life and career in which you felt that you had reached that height?

Well, you see, music is a very interesting thing. There have been occasions when I was playing when I felt that everything was coming out right, that the stars were in their right positions. But then, the next night, the constellations would not be in the correct places. So then I’d have to start over again.

It’s always a progression. So, I can’t say that once you’ve reached the height of your powers, that’s it, you’re on that level forever, because it didn’t work that way for me. I can look back at different jobs that I played when it was heavenly. It was perfect, everything was coming out like I wanted it to, and I was at the height of my powers on those occasions. But as a stopping point on the station when I could say, “I’ve reached the height of powers; I’ve got it,” no. That’s not the way music works. At least not the kind of music that I aspire to play. So it’s always something new: “I had it last night, maybe. But I didn’t quite get to it tonight.” All that makes it a very exciting life, and I wouldn’t have it any other way.

The session started at 3 a.m. and ran more than four hours. Various outtakes have surfaced on reissues of Way Out West, and the new 2LP set includes some more previously-unheard recordings. The tape wasn’t rolling the whole time, was it?

I don’t know. I’m sorry I can’t tell you about that. The stuff that goes on in the engineer’s booth behind the glass wall is stuff that I really never got myself into my whole career. I had the good fortune of working with very adept engineers: Rudy Van Gelder and a lot of those guys. I don’t recall the name of the Way Out West sessions engineer [Roy DuNann], but I remember him in my mind. Everybody seemed to be quite adept at what they were doing; they did their work and we did our work.

There were usually outtakes when people recorded things. But generally, that information is not shared with the audience. They just keep that stuff — where, who knows? — and then 60 years later, here it comes out.

Way Out West was also your first stereo recording. Stereo records were very, new at the time. What did you think of the stereo version of that session when you first heard it?

I didn’t look at it too much in that point of view, because I’m not a big audiophile guy. I was interested in getting a sound with me and Shelly and Ray and then getting the music together, getting an understanding where we wanted the music to go. I didn’t know too much; I wasn’t involved in the fact that it was an early stereo recording. The engineer might have required us to do something [different] since it was in stereo. I don’t know what it was, but whatever it was, we did it.