Subsequent CD-era reissues of Way Out West have included various previously-unreleased outtakes from the late-night recording sessions, but for the 2018 vinyl reissue, another unheard recording of “There is No Greater Love” has been added to the second LP. This alternate take gives the number a slightly more subtle reading, but its overall structure and length are quite close to the original album version.

Also noteworthy on the new vinyl reissue of Way Out West are a pair of brief studio dialogue snippets. The Way Out West alternate takes LP opens with Rollins good-naturedly explaining to his sidemen his philosophy that understanding and appreciating the lyrics to a song is a key to playing in an effective manner. “Y’know what?” he says. “You gotta dig the lyrics to these songs to really dig ’em.” He quotes from the lyrics: “’My cheeks ain’t tan / I’m a cowboy who never saw a cow.’ That’s me! ‘Never roped a steer ’cause I don’t know how. And I sure ain’t fixin’ to start in now!’

“Ya dig?” he adds, with one more quote from Johnny Mercer’s lyric: “Yippie yi yo ki yay.”

After Way Out West
With the one-night sessions for Way Out West completed, Rollins returned to his schedule of live performances with Max Roach. That band scheduled three recording sessions later that month, all at Capitol Records in Hollywood. After returning to the East coast, Rollins kept up his busy schedule of recording dates though the end of the year, with no less than a dozen sessions under his own name or with bands led by Kenny Dorham, Miles Davis and Dizzy Gillespie.

Other than a session with the Modern Jazz Quartet, all of Rollins’s 1958 and 1959 recording dates were for his own releases. With a catalog of twenty albums to his name, in Summer of ’59 Rollins took the first of his celebrated sabbaticals. For two and a half years, he refrained from public performance and recording, instead making daily treks to New York’s Williamsburg Bridge (connecting commuters and pedestrians between Manhattan and Brooklyn). There, he practiced his saxophone playing alongside the subway tracks, investing the time and effort to take his art to the next level. 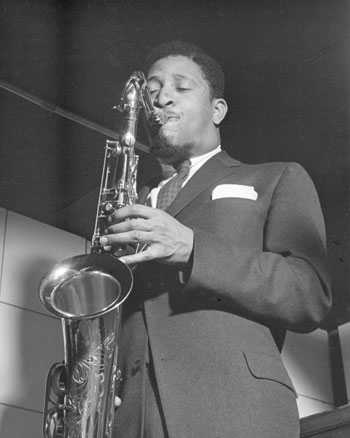 He returned to the music scene in late 1961. With greatly improved musical skills and a renewed sense of purpose, Sonny Rollins embarked on the second phase of his career. Beginning with his 1962 comeback release The Bridge, he would go on to release more than two dozen studio albums and many live sets. Save for an occasional guest spot on other musicians’ releases — including a 1981 session for the Rolling Stones’s Tattoo You LP — from 1962 onward, Sonny Rollins would be the leader or co-leader on nearly all of the recording sessions in which he would take part.

After the success of Way Out West, for a time Rollins performed with the same saxophone/bass/drums setup, using different musicians including drummer Elvin Jones. After his first sabbatical, Rollins recorded less frequently with that configuration; his last known recording date accompanied only by bass and drums took place in a 1966 Graz, Austria concert, joined by bassist Jymie Merritt and Max Roach.

Sonny Rollins’s most high-profile appearance of the 21st century was a 2001 concert recorded in Boston days after the 9/11 attack on New York City’s World Trade Center; that performance was released in 2005 as Without a Song: The 9/11 Concert. Rollins’s last studio album of new recordings was 2006’s Sonny Please, and in 2008 the saxophonist initiated release of a series of archival recordings. To date there have been four volumes of his Road Shows series. Though he has not performed onstage since 2012 because of respiratory issues, at age 87 Sonny Rollins remains active, and willing to take the time to look back on his career, including the highlight that is his 1957 album, Way Out West.

The sabbaticals you took are the stuff of legend, but I’m interested to know about your earliest experiences with music, before you began to play.

Well, when I was a child — I would say maybe three years old — my mother took me, my brother and my sister up to Colonial Park in Harlem, where I remember they had a production of Gilbert and Sullivan’s Pirates of Penzance. I heard the music during later years, and I sort of put two and two together. As I became a jazz musician, I guess that was always in my mind. I’ve heard the words to the songs I have played. So I always heard music and lyrics together.

I had a lot of experiences growing up in Harlem. There was a lot of music around: calypso, and a lot of jazz. And my mother used to make sure we heard it all. There was a place on 55th Street in New York City at City Center, I believe. She would take us there to see several operettas. My mother always tried to expose us to as much cultural things that were happening as she could, God bless her soul.

Did you always know you’d become a musician?

I wanted to be a musician from the time I got my first alto saxophone, at seven years old. And even before that, I was a big fan of the music I heard. Fats Waller, in particular, was my favorite. And of course, I saw Louis Armstrong in movies; he was also my favorite.

Louis Jordan was my favorite saxophone player: I loved Louis Jordan and Tympany Five. That was my main man, Louis Jordan; I got all his records, and I used to hear his records at my uncle’s house. Then I heard Coleman Hawkins, and I realized that it was something else I had to learn.