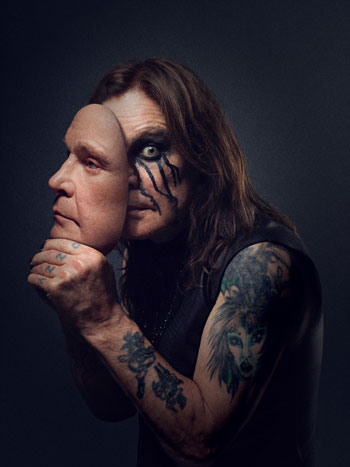 Eventually, though, things had begun to go wrong – credit the usual rock star excesses – and in 1979, Osbourne was dismissed from the band he had fronted. The band continued without him, enlisting a succession of vocalists in his place. But to the surprise of many, Osbourne surfaced with a new group of his own, Blizzard of Ozz. Pursuing a musical style not wholly removed from – yet not a copy of – Black Sabbath, Osbourne forged ahead with a highly successful solo career. To date he has released 11 studio albums of new material, and he was on the road last fall for what’s billed as the “No More Tours II” tour, his 15th run of live dates since 1980.

Osbourne’s first two solo albums – 1980’s Blizzard of Ozz and Diary of a Madman from 1981 – are undisputed hard rock classics, thanks in no small part to the guitar pyrotechnics of Randy Rhoads. Sadly, the guitarist would die in an airplane accident, but Osbourne would continue with other top-flight musicians. His subsequent output has included some uneven albums, but even the weakest efforts feature at least one noteworthy track.

Ozzy’s solo catalog includes no less than five live albums, three of which have gone Platinum (at least one million sold), but he says that as far as making music, his focus is on studio recordings. “I’m not a big fan of live albums,” he says. “Live performances are not a mirror of the studio version; rather, they’re a reference to what is on the record.”

He does follow a rough guide – if not quite a standard method – for making albums. “Songs have their own roles on an album,” Osbourne explains. “When I make a record, I always do a track that’s a ballad, which might end up being performed on stage. There’s [also] an epic track that is not intended for stage and a rock track that is [specifically] written to be performed on stage.”

Looking back upon his body of work post-Sabbath, Osbourne stands behind everything he has done, even the records that didn’t fare well with critics. “Each of the songs is a snapshot from that time period,” he says. “I always try and make the next song better than the last.”

As he embarked on this tour, Osbourne made it clear that he’s not finished with music or performing. “This is not a farewell tour,” he emphasizes. “This is my farewell world tour, which actually means that I will be slowing down, but won’t stop performing.” And he hasn’t ruled out making another album (his last studio release was 2010’s Scream). “I would like to do another album if it can be worked out,” he says. “I have a few songs ready to record.”

What he has ruled out is anything to do with his old band. Osbourne, Butler and Iommi released a highly-regarded reunion album, 13, in 2013, and followed it up with an extensive tour. “As far as I’m concerned, that book is closed,” Osbourne says.

Osbourne’s antics onstage and off have been the subject of endless tabloid fodder; there’s the possibly apocryphal story of him biting the head off of a bat, and his often tempestuous relationship with wife and manager Sharon Osbourne keeps him in the news even when he’s not touring or releasing albums. He’s on record admitting to extramarital affairs and continuing battles with drug and alcohol abuse, but he draws the line at what he describes as the biggest popular misconception about him: “That I’m a Satanist.”

With a UK/Europe tour this winter (since postponed due to health issues) Ozzy Osbourne’s criteria for what constitutes a good concert are rather simple and straightforward. “A good attitude and a good crowd,” he says.