Under the auspices of the Irish Cultural Academy, musician and producer Eric Cunningham has assembled the Young Irelanders, a talented troupe of performers who present Irish music and dance. The young Irelanders put a subtly modern spin on traditional music of the Emerald Isle. 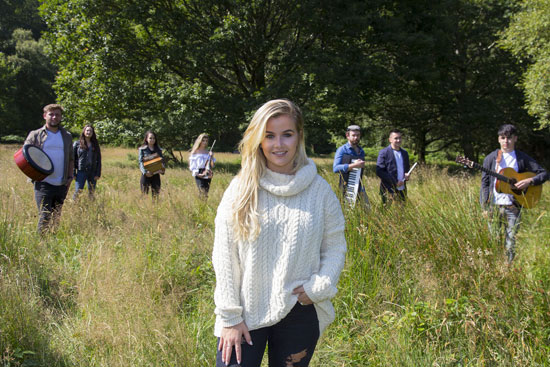 The folk music of our Appalachian region is very much based in Scots-Irish heritage; do you think that’s part of the reason that Irish traditional music resonates so deeply with audience here?

Absolutely. And from my travels, I have really noticed three things. One is that the nature of the music in itself – just in the systematic approach the music has, as it’s very tonal – is easy on the ear and aesthetically pleasing. And there’s the Irish diaspora: those who have emigrated – first and second generation – like to engage with the performers that come from Ireland and tour. And then there are those who have a connection through Celtic ancestry or the Appalachian angle.

The Young Irelanders have performed in front of audiences all around the world. Have you found that there’s something about folk music in general that appeals worldwide?

There are so many different countries and regions around the world that have a similar style of music, styles that go back to the ages. Even in places like Greece and Spain, it’s fascinating to hear the connection between the musics in different parts; sometimes they sound so similar!

I remember one time being in India. A very well-known Indian performer was singing a raga. When he heard Sean-nós – which is the Gaelic word for “old style” singing – he just couldn’t believe the similarities between the two. I don’t think there’s any connection in history between the musics, but I suppose, if you look deep enough into something, there are connections there to be uncovered.

What connection, if any, do the Young Irelanders have to the 1848 Irish rebellion sometimes known by the same name?

None, really! There’s no political undertones to what we do at all. The name was just something that caught my attention; it describes the nature of our music and dance collective.

What impressions would you like audience members to carry with them after they’ve seen the Young Irelanders’ performance?

But there’s no point in having somebody extremely talented performing the wrong choice of material. If people can’t relate to it – if it’s too technically demanding, for example – it might be lost on people that are not into it to that degree. So it’s very important that at the end of the day, people are entertained. And that’s our number one objective.