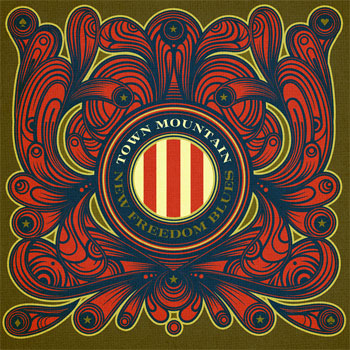 On the group’s sixth studio album, Asheville-based band Town Mountain continues to build on its successful sound. New Freedom Blues finds Town Mountain having it both ways: the five-piece is a reliable purveyor of classic bluegrass, yet the Appalachian music genre is subtly imbued with a modern-day feel that lets the group express its own character.

Having four songwriters and three capable vocalists means that Town Mountain can explore different sides of that character within the context of an album. Banjo player and singer Jesse Langlais writes songs that lean ever-so-slightly in a country and western direction, while Phil Barker (mandolin and vocals) and Robert Greer (guitar and vocals) turn in more traditionally-minded songs. Greer’s “Witch Trials” sports sturdy construction that transcends bluegrass without betraying its core musical values. And Bobby Britt turns in a lively instrumental composition, “Tar Heal,” a tune that showcases his precise yet freewheeling fiddling style.

The entire album has a casual, upbeat feel, full of warm and playful humor. It’s only on the album’s final track – “Down Low,” a tune co-written by Langlais and guest vocalist Tyler Childers – that Town Mountain expresses a melancholy vibe. Even then, the minor-key melody is peppered with elements more associated with country and even rock.

With New Freedom Blues, Town Mountain doesn’t blaze a great deal of new territory; instead the band expands upon what works. The end result is an album that will delight fans and perhaps even earn the hard-working quintet some new ones.