Learning to Fly Without Waters: Pink Floyd’s ‘Delicate Sound of Thunder’ at 30 (Part One) 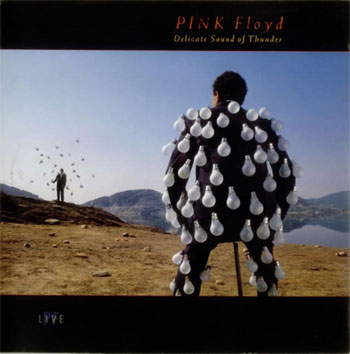 The Wall was the beginning of the end for the classic lineup of Pink Floyd. Though the balance of creative power in the group had begun to shift in Roger Waters’ direction after the unprecedented success of 1974’s The Dark Side of the Moon, the change was slow and gradual. But by the time of 1979’s The Wall, Pink Floyd had changed from the relatively democratic/egalitarian approach that served the band so well in the very late 1960s and early ‘70s toward a working method centered around Waters’ compositions.

The Wall was very nearly a Roger Waters album in concept, and very nearly one in execution. By the time of the limited run of live dates in support of The Wall, keyboardist Richard Wright was a salaried employee instead of a group member, and vocalist/guitarist David Gilmour had taken a more limited role in creative input.

The Final Cut pushed that set of realities to the breaking point: Wright was gone, Gilmour’s input into the album was minimal, and drummer Nick Mason – the band’s sonic architect in some important ways – was virtually invisible. To the surprise of very few, Pink Floyd ceased to exist shortly after its release. And for a time, it looked as if that would be the end of the story for the massively popular band.

Some longtime Floyd fans found both The Wall and The Final Cut somewhat lacking in melody; though they may well have appreciated Waters’ insightful and incisive lyrical prowess, the three-note motif around which most of The Wall was built didn’t always make for a compelling musical experience. And despite some strong moments, The Final Cut was even less rewarding from a musical perspective (its sound, however, thanks in great part to a process dubbed “holophonics” was nothing short of extraordinary). It was (though they would have rejected the label) the space-rock vibe and soaring vocals and guitar of David Gilmour that were – for many – the primary assets of Pink Floyd music.

The public feuding that took place after the breakup was unusual in large part because Pink Floyd had heretofore been a relatively anonymous group, giving few interviews and posing only rarely for photos. But accusations and recriminations were tossed back and forth between estranged camps: Gilmour (and to a lesser extent Mason) on one side, Waters on the other, and Wright sidelined completely. Eventually matters shook out to the degree that Gilmour established a legal right to record and perform as Pink Floyd; key to his successful argument was the idea that Waters had left the group rather than dissolved it.

And so Gilmour began once again, working first with Mason, and bringing in assorted friends and associates to help make what would become A Momentary Lapse of Reason. Wright was brought back into the fold as well. And while Waters’ biting lyrics were nowhere to be found, the album from Pink Floyd Mk III certainly sounded like the old group circa Meddle.

Predictably, A Momentary Lapse of Reason sold in droves, buoyed in no small part by a winning single, “Learning to Fly.” Nearly all of Pink Floyd’s trademark sonic elements were in place: Gilmour’s mellifluous vocals, stratospheric guitar work, and soulful massed female choruses backing things up. With the benefit of hindsight (and perhaps with the absence of charity), AMLOR can be seen as much as an excuse for a world tour as it was a collection of new songs.

And that’s exactly what happened: beginning in summer 1987, an expanded Pink Floyd built around the core of Gilmour, Mason and Wright took to the road. Between September of that year and July of 1989, Pink Floyd toured the world to near universal acclaim. Onstage, the band recreated the look, sound and feel of its classic concerts and albums, delivering a set that served up new tunes alongside ‘70s classics. The eventual appearance of a live album documenting the tour was inevitable, and in time for the 1988 holiday season, Delicate Sound of Thunder appeared on record store shelves.

One among many reasons cited for the Beatles’ retirement from live performance in the mid 1960s was the inability to recreate the sounds of the studio live onstage. By 1988 this had long since ceased to be an issue. Bolstered by a number of auxiliary musicians and singers – the touring lineup of Pink Floyd included 11 people – it was now possible to deliver a concert that sounded Just Like the Record. And to a great extent, that’s what Gilmour and company did on the tour in support of A Momentary Lapse of Reason.

Delicate Sound of Thunder opens to the atmospheric strains of Richard Wright’s keyboard – a Kurzweil K2000 for those keeping track – introducing Wish You Were Here’s centerpiece work, “Shine On You Crazy Diamond.” The soothing synth pads are joined by some high-on-the-neck guitar figures from Gilmour. It’s nearly four minutes in before the guitarist plays the four-note signature motif known informally as “Syd’s Theme,” and when he does, there’s an audible roar from the audience. The overall performance of “Shine On” here runs a shade over 12 minutes; the band plays a distillation of the full album version, but manages to hit all of the most recognizable parts of the suite. The glacial grandeur of the tune shines through (so to speak), and Waters’ presence isn’t really missed. The backing vocals – courtesy of seven of the musicians onstage – are more prominent in the onstage arrangement than on the studio version; that approach adds a human quality that’s welcome in the live context. Roto toms – a prominent percussive feature of mid ‘70s Floyd LPs – are all over the track. And Scott Page’s saxophone is true to the spirit of original player Dick Parry.

“Learning to Fly” folds some modern textures into the Pink Floyd sound; the percussion in particular has a programmed feel that pegs the song as a late ‘80s artifact. There’s an airy vibe to the live performance, and Gilmour’s vocals on this night sound just a bit tired or distracted. A few extra guitar lines – courtesy Tim Renwick – not heard on the studio counterpart add some texture to the song, but they’re neither prominent nor greatly needed.

“Yet Another Movie” is a track from A Momentary Lapse of Reason. It, too, represents a kind of updating of the Pink Floyd sound. It’s long on atmosphere but a bit short on melodic hooks; the turgid pace of the percussion is eventually ramped up mid-song as Gilmour peels off a relatively brief solo, but said solo is submerged just a bit in the sonic stew.

That song seamlessly gives way to an abbreviated “Round and Around.” On AMLOR the track runs barely more than a minute; in live performance it’s trimmed to half that length. “Round and Around” is scarcely a song; it’s really more of a relatively undistinguished linking track.

Having sat through the fairly uninspired “Yet Another Movie” and a brief interlude, fans have earned their reward in “Sorrow,” a gem from the late-period Pink Floyd catalog. A keening, majestic guitar figure opens the song in majestic fashion, and the increased sonic frequency range afforded by modern sound systems is put to effective use with rafter-shaking bass. The gated reverb on the percussion (from Mason and Gary Wallis) again reminds listeners that it’s the late 1980s, but the song’s merits transcend those limiting qualities. Gilmour’s squalls of lead guitar punctuate the vocal verses, and the tune holds interest through its nine-plus minutes run time. Listeners who came for Stratocaster fireworks were no doubt luxuriating in “Sorrow,” which ends as it began.