Though a relative youngster at age 35, Kat Edmonson makes music that’s rooted in another era. Her vintage pop approach draws form the style of vocal jazz and the Great American Songbook, but the Houston-born Edmonson’s original music is imbued with a strong modern-day sensibility.

Many artists bristle at the prospect of being categorized. Aware of the unique position she occupies in today’s popular music landscape, Edmonson has no qualms about labels. She willingly describes her music as vintage pop. 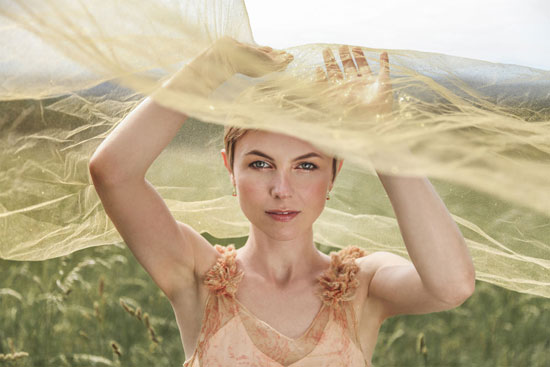 Edmonson says that she adopted the term “because none of the descriptive words that were being used seemed quite adequate.” To her, “vintage pop” connotes a style similar to popular music from past eras, ranging from the decades of the ‘30s through the ‘60s. “I thought ‘vintage pop’ was nice and all-encompassing,” she says.

The singer-composer gained some important experience during her days performing in Austin. Edmonson gigged steadily in Texas’s cultural and music capital for five years, from 2005 to 2010. “I learned everything there,” she says. “I learned the fundamentals of being on a bandstand and having to interact with a band. I learned what it was like to interact with a crowd; I learned about improvising with a band, and I learned how to create a show that had some fluidity—a kind of an arc—to it.”

Those days honing her craft in Texas found Edmonson in front of relatively small audiences in small venues; those kinds of rooms would seem naturally suited to the subtle, often quiet character of Edmonson’s arrangements and vocal delivery. These days, she’s more likely to be onstage in a large concert hall. But she believes that the lessons she learned back then still serve her well today. “Each room asks for its own unique performance,” she says. “I’m always wanting to connect with each individual in the crowd, so I do alter what I’m doing according to where I am.”

She does admit that she find herself getting more demonstrative when performing on a stage in a larger venue. “Playing a theater versus an intimate club can call for a largeness,” she explains. In a smaller venue, “sometimes you can really take advantage of the room and draw everyone in with a whisper or a subtle facial expression. In a theater, people might not see the subtlety. So I’m always mindful of that.

But the lessons Edmonson learned in Austin were first applied to her her debut album, 2009’s Take to the Sky. That record was a collection of old-school standards and contemporary material, all form the pense of other artists. In Edmonson’s hands, a chirpy girl-group classic like Gerry Goffin and Carole King’s “One Fine Day” was recast in a sultry chanteuse mode. She successfully crafted an album in which songs by George Gershwin and Cole Porter sat comfortably alongside covers of songs from John Lennon, The Cardigans and the Cure.

By the time of 2012’s Way Down Low, Edmonson began to focus on her own songwriting, while still including distinctive reinventions of other composers’ work (notably Brian Wilson’s “I Just Wasn’t Made for These Times”). On subsequent releases—The Big Picture from 2014 and 2018’s pointedly-titled Old Fashioned Gal—she continued to balance old and new styles, but eventually left the readings of others’ work behind. Its title notwithstanding, Old Fashioned Gal is a collection of eleven originals, all composed by Edmonson without collaborators. But even when she’s writing her own material, the influence of classic vocal tunes of the distant past exert influence.

But Edmonson believes it all happens naturally. “I’m never trying to assemble a vintage quality,” she says. “I think I just have vintage aesthetics and sensibilities, because that’s what I’ve spent so much time focusing on.” She emphasizes that her lyrics are quite contemporary. “They talk about these times,” she says.

Edmonson describes her musical approach using a clothing metaphor. “I never want to seem like I’m dressing in costume when I’m doing this,” she says. “I’m just making what I love and what I know very well. For me, there’s nothing contrived about taking something old and marrying it with something new. I literally just offer up what I’ve got each time I make a song.”