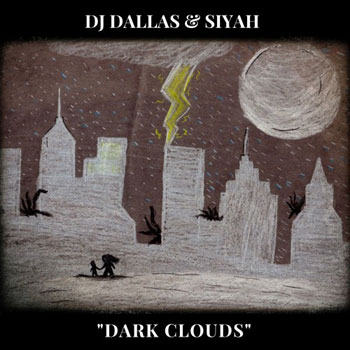 A new EP from Asheville-based rapper SIYAH (Isa Whitaker) explores faith and family in a style miles away from the gangsta rap of the 1990s. Enlisting talent from the ranks of his own family, SIYAH delivers an impressive 14 minutes of conscious hip-hop on Dark Clouds.

Dark Clouds opens with “The Heights.” Like all four of the tracks on the EP, it showcases SIYAH’s particular approach to hip-hop: he keeps it positive. His brother Dallas Henry (aka DJ Dallas) provides the music. Against a relatively dark and minor key synthesized backing with understated percussion, SIYAH delivers a self-referential rhyme that sets out some of the values he holds dear: “Take care of my mama / stay away from drama,” for example. The track expresses faith his his god, and touches on the fact that some of his friends suspect that he’s fronting, holding himself up as following the straight-and-narrow when (perhaps) he’s not. SIYAH makes passing and oblique asides (he mentions Oakland but doesn’t get into details), hinting that he hasn’t always been on the righteous path. But these days, he tells us, he’s striving to stay true to those values. “The Heights” includes a statement that encapsulates SIYAH’s goals, modest and ambitious at once: “I’m holding on to my faith … I may never have the newest whip / I know I won’t see the billboards / or the Grammy script, I’m better off nameless.”

“I Pray” has a hypnotic musical track with a stronger beat. Part of the track features SIYAH rapping in the persona of someone taunting him: “Go, go lil’ rapper dance / Sing for ‘em they’ll clap they hands.” This unnamed character counters an assertion made in “The Heights” when he predicts, “You might even win at the award show.” But SIYAH doesn’t seem taken in by all that. “Regardless we all destined for the same thang,” he tells us. And he further defines his responsibilities as he sees them: “If I don’t give ’em the whole truth / That’s going to be on me when I get buried.”

A disembodied, synthesized voice provides an eerie, faraway backing melody while stuttering drum machine patter lays out the beat in “The Struggle.” Another autobiographical track, it expands on SIYAH’s approach of peeling back the layers of his story, bit by bit. In “The Struggle” we learn that he’s been rapping for a decade (he’s 28 now), beginning with the goal of finding riches. “Found out this whole time was already rich,” he explains. SIYAH enumerates some of the reasons that – as an African American – he lives in daily fear, but his overall goal is to remain positive and grounded. “We’re all pursuing the same / Can’t get lost in the game,” he raps. “It’s easy to do, but in the end there won’t be nothing to gain / Yea, In the end there won’t be nothing.”

An inspirational and impassioned – yet clear-eyed – archival speech from Dick Gregory provides the introduction to “Blessings in the Rain.” A lush instrumental backing (with occasional blasts of thunder that call to mind The Dramatics’ soul classic “In the Rain”) supports what’s easily the best rap of the four on Dark Clouds. SIYAH’s mother Melody adds some soulful vocals on the chorus while the rapper lays out rhymes that echo the sentiments of Psalm 23. And while he may worship a (slightly) different deity than the one described in the New Testament, his devotion is clear: “Over here we say our prayers / we don’t do no wishing.” Once again SIYAH expresses some real-world fears (“And pray I kill these demons before they conquer my family”) while at the same time asking for help in form of prayers to help him in his journey. And he invites listeners to join him: “Yea, let’s pray for peace, and pray for sanity / And pray we kill these demons before they conquer our families.”