Active Bird Community: Birds of a Feather Still Flocking Together

The four members of Active Bird Community are only 24 years old, but the Bedstuy-based indie rock group is already releasing its fourth collection of new music. The title of that record, Amends, might suggest that the four musicians are already getting on each other’s nerves, but that’s not the case.

Guitarist-vocalist Tom D’Agustino admits that the band has gone through a lot of changes since coming together 13 years ago. “But we took the band seriously from a very early age,” he says. “We held each other accountable, but we also praised and encouraged each other’s creative process.” 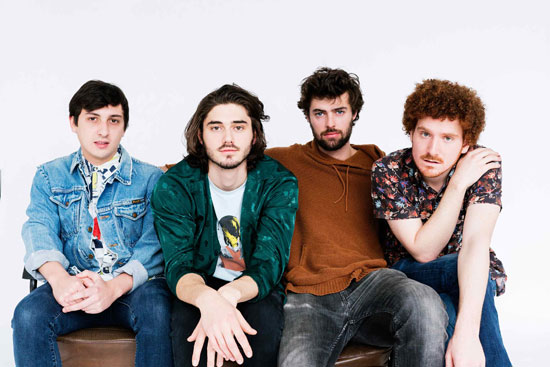 Early on, the band members were united by their shared admiration for pop-punk bands like Blink-182; these days their tastes have become more nuanced. “Our friends and older siblings exposed us to more indie/experimental acts like Animal Collective, WHY? and Casiotone for the Painfully Alone,” D’Agustino says. “Those bands didn’t necessarily influence our sound, but they definitely brought us closer together as music lovers.”

The band members were ambitious from the start. “We wanted to be rock stars,” says D’Agustino with a laugh. “We wanted a record deal with some huge record label, and to play the Super Bowl.

“But at the same time, yeah we just wanted to play a show outside of Hastings,” he admits.

After gaining popularity at home, the band took it beyond Brooklyn. Bassist Zach Slater says that Active Bird Community took the philosophy of “building a fan base one fan at a time” with them when they played out of town. The band made friends in other locales, and Slater says “we did whatever we could to play house and DIY shows.”

D’Agustino, Slater and lead guitarist Andrew Wolfson have been in the group since its beginning; drummer Quinn McGovern joined in 2016. Slater says that the music the band made prior to McGovern joining reflected the founding members’ comfort with each other. “Quinn has pushed us to take more risks,” he says. “He brings a new level of excitement to the band.”

After last September’s album release show at Rough Trade NYC, Active Bird Community set out on its first real nationwide tour. “I’m excited to let these new songs stand on their own legs and express themselves to new audiences,” said D’Agustino during our conversation ahead of the Rough Trade date. Slater’s goals are a bit more modest: “We’re just excited to see who’s out there listening to our music,” he says.