The Struts Under Pressure, Part Two

Luke: And the thing is, there was so much added pressure as well. We weren’t allowed to leave any of those sessions without a great demo. That was what was kind of expected of us. Because it costs money. [pauses a beat] No one said that directly, but there was definitely …

Adam: We wanted it as well. Where we were doing it, as well, was at this little island called Jersey, off the south coast off England. There’s nothing really there. So, we’d stay in a hotel, just me and Luke. We’d go to the producer’s house at 9:30, 10:00 in the morning and we wouldn’t leave until 10:00 at night. And it was just like, “Fuck.” [laughs] Thinking about it now, though, I actually can’t wait to do that again. 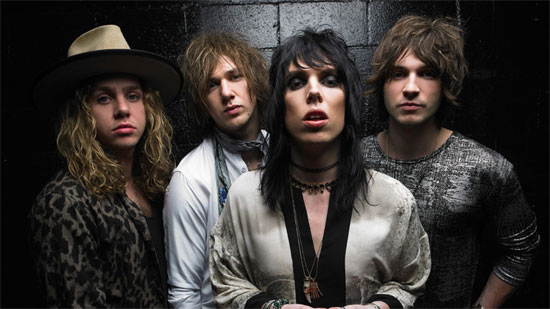 Luke: And that particular working experience, working with Ray Hedges in Jersey was – and is always – a joy …

Adam: Kind of. I mean, it is stressful.

Luke: But it’s a fantastic, enjoyable brain fuck. We’ve known them – him and Nigel [Butler] for, it must be, eight years?

Adam: Eight years, yeah. And they were the ones that me and Luke first ever worked with, before we even had a ban. There are songs on the first album we recorded with them: “Dirty Sexy Money,” “Roll Up,” “Black Swan,” “Where Did She Go.”

Luke: They really helped us give us this sound of adding in these great synthesizers, which we didn’t really think about, and they helped us carve our songs into much better pieces of music, basically.

Adam: And great arrangements, as well, and stuff like that. Me and Nigel are quite chordy-nerdy. We’d sit down and, “Can we do this?” “I don’t know. Fuck it. Let’s do it!” And it was just really fun.

So … unlike the first album, you ended up working with just one producer for Young & Dangerous?

Luke: No, and I don’t think, really, in the near future, we ever will.

Luke: Because we have such great results with different people. If you want something which is undoubtedly inverted-commas “Struts,” then we go to Ray Hedges; he can bring that out of us. If we want something which is a little bit more, dare I say, cutting edge and really forward-thinking, then we would go to someone like Jon Levine, who we’ve recently worked with.

Adam: We did “Body Talks” with him.

Luke. “Body Talks,” “People,” and he produced the finished version of “In Love With a Camera.” And you’ll hear on the album, there’s a couple kooky ones he’s done with us. So, yeah, we worked with lots and lots of people in different locations.

One of the most thankless tasks is being an opening act. When you were opening for Foo Fighters, did the audience just embraced you right out of the gate, or did you have to win them over?

Adam: All these people here tonight are pretty much all saw us with Foo Fighters. Look at all the Foo Fighters t-shirts. The people at the VIP event were like, “We came here because we saw you open for Foo Fighters, and we just thought you were amazing.” I think we’re going to see a very similar thing across the whole country, really.

Luke: I think the Foos fans are particularly receptive, which made our lives a fuckload easier. And to be honest, when I started doing “Under Pressure” with them, it was just circling across the internet, and for the fans to go to YouTube and their Facebook feeds or whatever and see that happening – Dave and Taylor [Hawkins] giving me a hug, and then Dave saying this amazing speech about us – it kind of started a bit of a wildfire. Especially on the second leg of the tour, the audiences were really responsive. I felt like that they listened to the music and were really getting into it. It was a really, really great experience.

Adam: A nod of approval from Dave Grohl goes a long way.

One of the things that impressed me last time I saw you – and it’s true again tonight – is how young the crowd is. Actually, it cuts right across generations.

Adam: I really enjoy that about our fans. I think sometimes it’s easy to envy the big pop acts, especially guy groups or boy bands and stuff like that. You can envy their success – and nothing on them, but – when you have a fan base of fourteen year old girls, it’s very rare that they kind of stick with you long. I really feel like our fan base is so great and varied; families, actually have emotional investment in the music. It feels very long-term for me. The people who are coming to the shows, some of them come thirty-odd times.

Another thing I noticed the last time I saw you onstage was how much you evoked the spirit of a ‘70s rock concert, and you did it without sounding retro. Do you consciously work at trying to get the vibe of the big arena-rock kind of thing, or does it just sort of happen?

Luke: Well, first and foremost, how I work the audience is just my taste. And I think my taste does have massive echoes from how Queen would address an audience, how Slade would address an audience; it’s a very English thing to kind of do. It’s kind of like Little Richard, and that’s just what resonates with me; that’s what I enjoy. I think what gives it the modern twist is where and how we’re doing it, and the music that’s behind it. It’s not like I’m talking about things that were only specific to 1972 or anything like that. But there is a conscious effort, especially in the music, that we don’t want to regurgitate a genre which – let’s be fair – has been milked to its limit. And what makes me laugh is when people turn around and say that we’re “saving rock and roll.” It’s very cute, but all we’re really trying to do is just play it. But we don’t want to copycat, if that makes sense. We want to push it in a slightly new direction which makes it more exciting.

I also couldn’t help but notice that most everyone in the audience knew the words, even though you weren’t all that well-known here two years ago. To what degree is your performance affected by the feedback from the audience?

Luke: Immensely. It’s always these two things in every show: every single song, every opportune moment, or every given moment, there’s something in my head which says I have to work them. Especially if I see the people just sort of nodding their heads. And especially with the new stuff; the new stuff is where you’ve got to get them going the most. People associate good times and memories with movement. For instance, when we play “Fire” now, I know I’m going to have to work them even harder. Because they don’t know it …

Adam: They might now. It’s been out on Spotify for a few weeks.

Luke: Yeah, but there are still cues. It’s like, “Okay. Not everyone is going to know this chorus. So, what I’m going to do is I’m going to get everyone clapping with every single chorus,” right? So, at least when the chorus happens, there’s something happening. Not everyone’s singing the exact words at the same time. A song “Could Have Been Me” or “Put Your Money On Me,” for example, or “Kiss This,” I can sort of take a little bit of a back seat. Just a little bit.

Because they know it …

Luke: Yeah, because they know it, and I can see everyone’s singing every word. So there’s no need for me to be pushing them.

Adam: They’re moving without you needing them to.

Luke: Exactly. But it’s the new stuff that you want to get them going even more.

But they don’t know the new songs. And the album’s still not out. Is it a challenge to be doing these shows without the album out there?

Luke: It just had to be done. As a band, we’ve been wanting to get out there and do our own shows for quite a while. Because it was almost the best part of a year that we were touring on and off with the Foos, and we were having to do all the old material. So, we started working up the new material in our spare time and in soundchecks, and I think we just got to a point where we were just getting really anxious to get out there and start playing new stuff, new show, new dynamic, new set list.