Amigo: On Their Own Trip Now

Based in Charlotte, Amigo make modern-day country rock that’s informed by the sound and style of the genre’s earliest practitioners: groups like the Byrds, the Flying Burrito Brothers and Poco. Amigo – led by guitarist and songwriter Slade Baird – recently released And Friends, the follow-up to the trio’s 2014 debut album Might Could. Amigo has earned good notices and accolades, including a best-of designation in Creative Loafing Charlotte‘s annual readers’ poll. The group tours throughout North Carolina and the southeast. 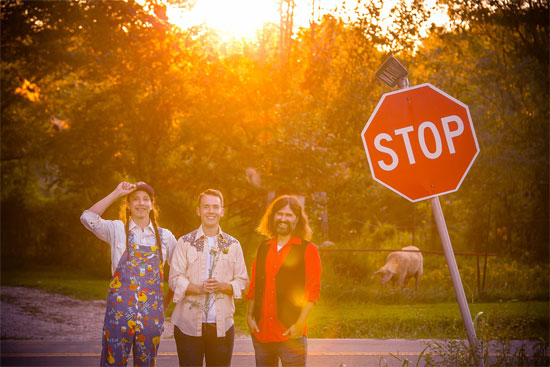 In 2016, Amigo cut a song at the Fidelitorium, producer Mitch Easter’s Kernersville studio. Were those a trial run to decide if you wanted to work with him on the And Friends album?

It wasn’t so much that. Our friends in [Charlotte garage-punk group] Temperance League had done a whole bunch of records with Mitch. That’s how we found out that he was as close by as he is. And of course we’ve known of him and listened to music he’s been a part of for years.

The Fidelitorium is just far enough away that we could get out of town, spend the night and relax, get into the studio vibe and work with somebody who we knew would make it sound good. We knew we wouldn’t have to worry about anything. But no, it wasn’t any kind of audition! Mitch’s résumé [R.E.M., Let’s Active, etc.] speaks for itself.

The track “Own Trip Now” features a false ending like the Beatles used to do. Was that part of the original song concept, or an afterthought?

We knew there was going to be a solo there. And our friend Eddie Garcia of the band 1970s Film Stock lives close by Mitch’s studio; we knew he was going to drop by with some snacks and beer. So we knew that solo spot would be perfect for him.

And Friends is a very polished – but by no means slick – album. Your live shows feature just the trio: you, bassist Thomas Alverson and drummer Adam Phillips. And the shows are a bit more freewheeling and stripped-down. How do you view the relationship between studio work and live performance?

I think that if it were 1972, and we had a big record label footing the bill, the record would probably be the sound that we’d want to take out on the road. It would be a huge band, and the live show would be a reflection of the recording.

These days, economics dictate. But when we go into the studio and record, we still want to make the kind of record that’s the sound that’s in our heads.

Did the recent Creative Loafing Charlotte award result in more people at your shows?

It was a really nice surprise to us to have that kind of recognition, but I guess time will tell. We haven’t really played that many shows in town since then, so here’s hoping!