Soul Street Dance combines hip-hop, storytelling and music, creating a dazzling, high energy show in the process. The two founders of the Houston-based company, Rock Williams and director Javier Garcia both have a long history as dancers. When the company in which they both performed ended its run, the two men knew they wanted to continue. They soon formed Soul Street Dance. The company seeks to combine soul (“you’ve gotta have soul with whatever you do in life, says Garcia) and street dancing.

Street dancing encompasses a wide array of styles that Garcia colorfully describes as “everything mixed in a pot, like gumbo. You’ve got b-boying, breaking, pop-locking … whatever you want to call it.” Soul Street Dance is a showcase that educates and inspires while entertaining audiences. He says that the Soul Street Dance presentations explore “the difference between somebody just talking in front of you and actually doing it. When we can showcase dance using different skill sets – and people see us really enjoying and loving what we’re doing – the people can feel that.” 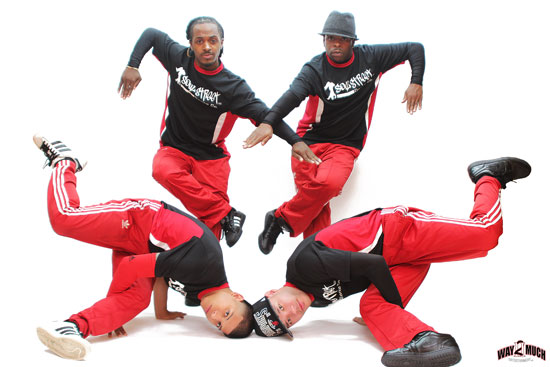 Garcia and Williams are inspired to make Soul Street Dance something truly special. “We grew up in hardship, in rough neighborhoods,” says Garcia. “But we were able to overcome that with our talents. And we want to tell people that they can do the same.”

Even though they rose from their circumstances, the members of Soul Street Dance recently encountered hardship of a different kind. Days before speaking with Bold Life, Garcia and his colleagues faced Hurricane Harvey, the United States’ first major storm of the particularly severe 2017 hurricane season. Garcia saw that the disaster brought out the best in people. “Everybody has been reaching out from all over,” he says. “helping and shipping supplies: people we know, people we don’t know. It’s been an amazing thing to see what’s going on with America right now.”

Garcia and his colleagues are focused on the positive. And Soul Street Dance has taken its inspiring message around the world; in recent years the company has performed all across the United States as well as in Haiti, the United Kingdom, Moldova, Bosnia, Kosovo, Hungary, Germany, Canada and Mexico. The list goes on and on.

And while Garcia enjoys all of the shows, he treasures a special memory. “The coolest thing was in 2014 or 2015 when we went to Armenia, Azerbaijan and Georgia,” he says. Traveling as part of the U.S. State Department’s cultural ambassadors program, Soul Street Dance visited countries with a long and deep-seated antipathy toward one another. “We spent a week each in Azerbaijan and Armenia,” he recalls. “We did workshops and shows, and we collaborated with the dancers there. And we also held a hip hop competition in each one, picking the ten best dancers in each country.”

A month later they returned to the region, this time convening in neutral territory, on an island resort in Georgia. “We brought all the dancers, and did a big show at the end,” says Garcia, beaming with pride. “The diplomats all came out too; everybody was cool. It was beautiful, with dancers everywhere.”

The experience brought forth a kind of peace through dance. “Everybody got the vibe and energy,” Garcia says. “We dancers do it for the love of it. Politics and all that other stuff, none of it matters. We brought everybody together through hip hop.”

Another popular program developed by Soul Street Dance is called “The Art of Hip Hop.” That show spotlights the talents of Rock Williams. “He’s not only a pop-and-locker,” Garcia says. “He’s a rapper, too.” that program was originally designed for use abroad under the aegis of the State Department, but proved so popular that it’s now performed at shows here in the U.S.

Soul Street Dance offers a number of programs, each with a specific theme and focus. Soul Street Dance’s “Breaking Backwards” show features both Garcia and Williams plus other company members who alternate between dancing and deejaying.

“Breaking Backwards” was the first program that Garcia and Rock developed when they started Soul Street Dance, and it remains among the group’s most popular offerings. The show is a music and dance travelogue through a large segment of the last century. “We do pieces from the 1920s all the way through to the ’80s,” Garcia says. “We show the different genres, whatever was super-hyped in that era, and we put our own style to all of it, and let it all flow.”