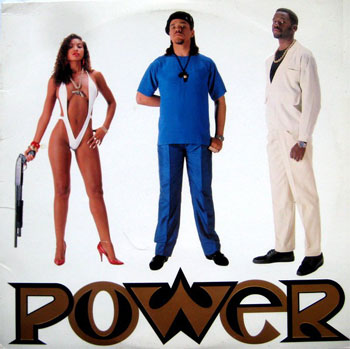 When considering the work of a high-profile, successful recording artist, it’s often instructive to look at the work they did prior to their breakthrough. Important clues in regard to their creative development can often be identified, and the arc of that development can be more fully understood and appreciated.

In hip-hop, one of the genre’s game-changing releases was Ice-T’s 1991 release, O.G.: Original Gangster. That album was a watershed moment in so-called gangsta rap, and its two dozen tracks represent the fully formed realization of Ice-T’s artistic visions, replete with sex, violence and humor. But three years earlier, the Los Angeles-based rapper had put in place many of the elements that would characterize O.G.’s artistic triumph.

Released in September 1988, Power was Ice-T’s second studio album. His debut, 1987’s Rhyme Pays was a solid west coast rap effort that moved beyond the substyle’s reliance on primitive and rudimentary synthesizer beats, but today – notwithstanding the gangsta subject matter of some of its tracks – production-wise, Rhyme Pays sounds a bit thin.

A co-production with hip-hop icon Afrika Islam, Power was Ice-T’s first breakthrough. On the album, he establishes himself as a keen chronicler of one kind of urban African American experience, one with which listeners could alternatively identify, sympathize or reject. Then and in the future, Ice-T would come in for criticism by those claiming that he sought to glamorize the lawless, drug- and crime-infused scenes described in his tracks. The truth is far more nuanced. Like urban poet and author Iceberg Slim – noted as a major influence upon Ice-T – his raps were often more concerned with authentically describing situations in a kind of reportorial fashion. True, as the narrator of a given piece, Ice-T would sometimes position himself as a party to the mayhem, but in the end, the tracks were focused on offering a kind of positive (or at least morally neutral) scene-setting as opposed to glorification of crime.

Ice-T dedicates Power to the Rhyme Syndicate, the collective with which he would often work. The opening track drops the listener into his world of mordant humor, with a spoken-word vignette that finds one of the characters more concerned with hearing Ice-T’s new tape than offering aid to a critically injured friend (whom, incidentally, he has just shot).

The music starts after that. With insistent beats (using the technology of the day) and some expertly-edited loops, Afrika Islam lays down a solid and relentless beat upon which Ice-T spits his toasting rhymes. “Power” is full of braggadocio and self-referential phrases, but the listener can – if they choose – set aside the subject matter and luxuriate in the beat and the feel of the vocals.

“Drama” finds Ice-T adopting a more laid-back (but no less sinister) vocal tone; in many ways the track is a precursor of the (more fully-realized and thus vastly superior) “Mind Over Matter” from O.G. An alluring synthesizer line helps create an aura of danger as Ice-T tells a story of an arrest, conviction and what follows.

Steely bass lines form the basis of “Heartbeat,” another example of boastful toasting. The synth drums are a bit primitive here – and the production is stark compared with Ice-T’s future efforts – but the turntable scratching is appealing. It’s as close as Ice-T comes to a party track on Power’s first side.

The self-referential “The Syndicate” is bracingly uptempo, and features Ice-T’s partners in rhyme. “Radio Suckers” presents the most intricate and densely layered backing track on Power. It points the way toward O.G.’s wide-screen production. 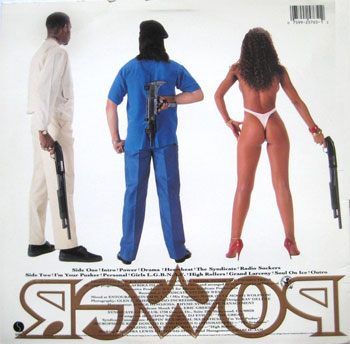 “I’m Your Pusher” lays out a metaphor in which a vinyl record takes the place of drugs; while it contains its share of menace and danger, at its heart it’s a anti-drug message: “You wanna get high? Let the record play,” Ice-T advises. In a nod to ‘70s funk and soul, the track folds in samples from Curtis Mayfield’s “Pusherman.” In an ominous preview of his future battles around the controversial “Cop Killer” track, Ice-T would find his message misinterpreted by many as pro-drug.

“Personal” samples the gritty guitar riff from Heart’s “Magic Man,” helping further to break down the barriers between hip-hop and hard rock. While he had done a bit of rock sampling prior to this, Ice-T clearly discovered he had struck gold with the approach; part of O.G.’s undeniable power would come through the use of bone-crushing riff samples from the likes of Black Sabbath.

Power’s central party tune is the very NSFW “Girls L.G.B.N.A.F.” In (hopefully) more enlightened times, the track can be seen as glorifying objectification, but Ice-T endeavors to make the point that “it’s good to me and it’s good to you.” Other than Ice-T’s raps and some background murmuring, the track features little beyond a drum machine, so in the end it’s not what it could be. As Ice-T continued to find his voice, he discovered that party raps weren’t what he was about.

The deep groove of “High Rollers” provides an alluring backdrop for another cautionary tale; listeners who took the time to listen to Ice-T’s raps would understand that he wasn’t glorifying the thug life; in his own way he was attempting to suggest a way out of it. But listeners could be forgiven for their confusion upon hearing the track that immediately follows: “Grand Larceny” uses a bank robbery as a metaphor for live performance. Still, it’s easy to miss that and come away thinking that the track – replete with goofy, stereotypically white police dispatcher voices – celebrates crime.

Taking its title from Eldridge Cleaver’s 1960s memoir, “Soul On Ice” is the closest that Ice-T comes on Power to imitating his hero Iceberg Slim. Where Iceberg used an actual jazz band on his 1970s LP Reflections, Ice-T employs samples and loops. But other than that, he’s in rhyming storytelling mode; “Soul On Ice” features one of Ice-T’s best lyrics. However, it represents a direction he wouldn’t seriously pursue on future releases.

The album ends with “Outro,” a silly but inevitable spoken word bit that picks up the scene laid out in “Intro.” The injured man doesn’t fare well.

For his next album, The Iceberg/Freedom of Speech…Just Watch What You Say!, Ice-T dispensed with the party raps (except for the guilty-pleasure comedy of “The Girl Tried to Kill Me”) and moved in a more sinister storytelling direction, one that came to full flowering on the classic O.G.: Original Gangster.