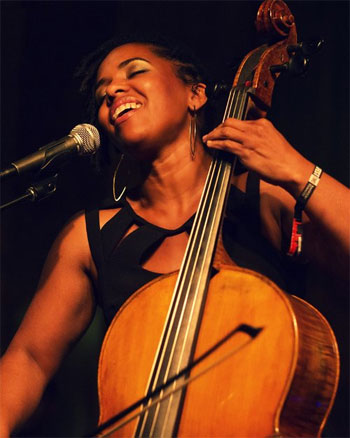 Most musicians bristle at the idea of having their music labeled into a particular genre. But Shana Tucker is no ordinary musician. In fact her music doesn’t lend itself to easy description, so she decided to help those new to her work: she came up with her own label: chamber soul.

“A lot of people say to me, ‘Oh, you created your own genre!’” laughs the Long Island native, now living in North Carolina. Citing the old saw that necessity is the mother of invention, she elaborates. “In conversation, I found myself explaining more about what my music wasn’t: ‘Well, it’s kind of classical, but not. It’s kind of folky, but not. And it’s definitely not cool jazz.’ That’s too much!”

Tucker is a classically trained cellist. “I love chamber music,” she says. She cherishes the musical conversation that happens between the musicians. “The melody is now with me, and then I transfer it you you, and somebody else is saying something underneath it all.” She notes that chamber music is designed for intimate spaces, but that doesn’t mean it has to be played in a small room. But Tucker doesn’t play classical music.

Her sound has strong elements of soul music. “The soulful part has almost everything to do with intent,” Tucker says. “The music that I write and play, I don’t do it just for me. The stories that I write in my lyrics are not unique to me, so when I write from a place of intentional truth, that’s how I hope it’s received: soul to soul.”

She says that the combination of the chamber music aesthetic with her lyrical focus resulted in chamber soul. And paradoxically, the label gives her freedom to move her music in many directions. “I can play a movement from a cello sonata, and then I can shift into a Bill Withers tune. And then I can do a jazz standard, and then something by the Police.”

For Tucker, it’s all less about the genres, and more about expressing an idea: “This is music that I like, this is music that I write, and this is the sum of my parts. And it manifests as chamber soul.” Tucker’s facility on multiple instruments is key to her musical versatility as well; in addition to cello, she’s proficient on piano and guitar. “And I play a mean shaker,” she laughs.

Her onstage setup also includes a melodica (“because I wanted to explore some chordal components with it,” she explains) and one piece of modern gear, a loop station. The loop station is a device that allows Tucker to play a phrase on a selected instrument, and then have that phrase played back or “looped” while she adds additional elements on another instrument or vocal.

Tucker’s wide instrumental facility gives her a songwriting advantage, as she has a deep understanding of the capabilities and limitations of each instrument. “One of the reasons why I picked up guitar late, late, late in life is because my piano chords started sounding the same,” she says. She gained inspiration when she read of Joni Mitchell’s development of alternate guitar chords, done to address the Canadian singer-songwriter’s limitations as a polio survivor.

Jazz also informs Shana Tucker’s music; she studied jazz as a student at Howard University. Her classical background left her unprepared for discovering the innovations of artists like John Coltrane, Sun Ra and Herbie Hancock. But she fell in love with jazz. 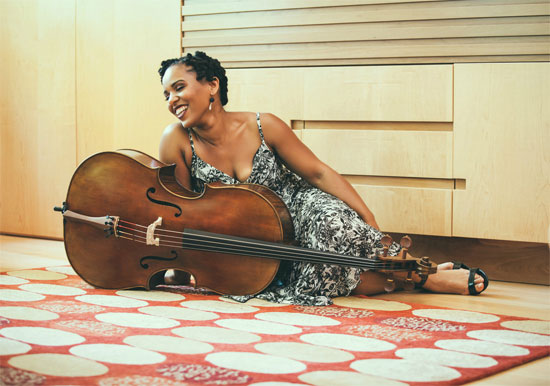 A key moment in Tucker’s life came in 1992 when she first heard the Uptown String Quartet. “They were doing a performance at the Kennedy Center,” she recalls. “Four black women playing string instruments? I’d never seen that before!” The ensemble played songs by James Brown and Otis Redding. “I thought, ‘How do they have so much soul and rhythm, and they’re playing this music on classical instruments?’”

Tucker’s dizzyingly varied background also includes a five-year run as part of a Cirque du Soleil production in Las Vegas. And the irrepressible musician learned lessons from that experience, ones she would soon apply to her own work. “In Cirque, there are a bunch of people who are ridiculously talented – not just in the thing that they were hired to do, but just in general – and they’re not afraid of claiming ownership of all those things they do well.”

And – like “chamber soul” – that description perfectly fits Shana Tucker and her approach to music. “That’s another thing that Cirque taught me,” she says. “There are no boundaries. Go do your art. Go do it. Period.”