It’s Just a Box of Wood: A Conversation with Leo Kottke (Part Three) 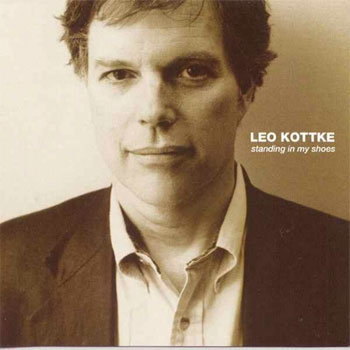 When you’re playing a song that’s written by someone else, do you feel a responsibility to deliver it in a recognizable style, or do you take more of a jazz approach and view a tune as a canvas upon which you can paint your own picture?

Well, I’ve tried with kind of both approaches, but the approach will be dictated by the material. The first thing that is just obvious is whether I even have a chance with it. It’s like a hat. There’s some hats that look great, but not on your head. Or they won’t fit. And you know right away.

There are plenty of pieces I’d love to cover, but I just can’t. It won’t fit. I don’t cover a lot of them, but there are some that fall right into place. I did try with a tune I’ve always loved called “Twilight Time.” I did try to stick as closely as I could to the original composition. I had a real surprise talking to one of my favorite musicians, Joe Pass. I mentioned “Twilight Time” and I said, “I heard the original recording of that,” and I was about to say how goddamn silly it sounded by The Three Suns. I’ve forgotten now exactly, but it’s something like accordion, saxophone, and some other thing. Very odd sound. But Joe said, “Oh, The Three Suns,” and he listened to them a lot.

So, somebody as developed as Joe had no problem with The Three Suns. Someone as ignorant as me thought it sounded weird, but they wrote it and they did it right. So, I fucked it up. I haven’t heard my version in awhile, but I’m trying to get it back in my hands and maybe improve on it a little.

When you’re writing an instrumental tune, do you start with a non-musical idea or a mental image, or would you say that your instrumental work is purely musical?

There’s this kind of stream of something that’s running through me all the time. It’s just kind of like a sensation, and the guitar fit that when I first picked it up, unlike the trombone or the violin, and so I just picked the guitar up and fiddle within that. It just kind of reaches that part of what it feels like for me to be alive, and every now and then I just stumble across something and if I like it, I’ll keep playing it until I’ve driven it into the ground. And more of it will come in so that I have an excuse to play what I’ve already driven into the ground, and that’s how these things get written.

Once, on a movie score – it’s kind of grandiose to call it a score – I had to come up with kind of a love scene for Margot Kidder and Ted Danson in a truck, and I was there when the scene was shot and the truck was parked by a stream, and it’s supposed to be very romantic. The truck interfered with that, but I knew what the stream smelled like! I just couldn’t think of … sometimes, with that movie stuff, you have to actually try to play to an idea, which is kind of ridiculous, but I gave up.

So, the only time I’ve done it: I just notated a guitar thing without hearing it or without a guitar (I’m pretty illiterate. I have to go back to the old bass clef in junior high to write). But I wrote something and when I played it, I liked it. It worked, too, for the scene. It lifted me out of the sewage that’s in the stream. What I came up with, really, is what sounds like a terrible, terrible, almost-parody of Bach. But it was simple enough – I think I did it on the 12 – that the guitar could make it kind of real. It was an interesting exercise for me. 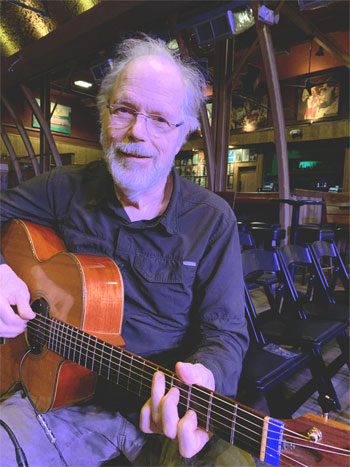 I know that two forms are very different, but to my ears, your folk playing – especially on the 12 string – has kind of a hypnotic ambience. It’s the same feeling that I get when I listen to Indian ragas. Do you see any connection at all between what you do and those styles of music?

I do, and for me, it’s just that sensibility that floats up in those things. It’s true, also, for calypso, and for German baroque lute. When these things take off, they have this [quality that] you’re talking about; you could just treat it as a little motor and let it run all by itself.

I’ve had the experience. One that stuck in my mind … in the ‘60s, I was at a party – a very loud party – and I walked past some little room in this house and I heard [on a television] this shehnai, the Indian horn that looks like an oboe. It was playing whatever raga this guy was into. So, it was a Pakistani player named Bismillah Khan; I found that out later.

But as I walked by, he hit a phrase of about six notes that floated up out of that stream – and I’d only just got plugged into that stream as I walked by – and the phrase stopped me. It was as clear as a bell in all of the noise, and just shatteringly beautiful. Just five more notes and the world’s infinitely stuffed with notes, and I stopped and stared at this tiny portable TV screen. And at the end of that phrase, the camera cuts to several women in their saris who are in tears. It looked like a private concert. And clearly, it hit everybody.

It’s worth a tear because it’s so goddamn beautiful. There’s these weird things that happen where people know what they’re doing and set up harmonies as they move that generate sounds that aren’t being played, but are generated. The overtones … it can happen with the way the rhythm of more than one instrument meets the instrument of the other, and the third part appears out of pure air. And that happens on all kinds of levels. It’s rare, and when it happens, that’s it. That’s the great stuff.

You’ve been performing now for some 50 years now. What keeps it fresh and interesting for you?

The guitar itself. The guitar saved my life as a kid, and that’s not an exaggeration. And it has stayed with me ever since. It’s the center for me, and it’s really endlessly interesting to me. I’m just fascinated with it. I enjoy just picking one up and holding onto it. I don’t have to come up with anything to get met by that thing. It’s just a box of wood, but it fits some kind of combination in me that has never gone out. And that fit is never going to go away.