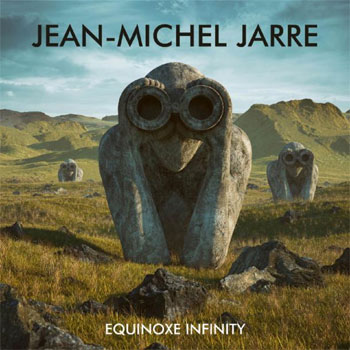 Because a great deal of your work is instrumental, I’m curious about the inspiration for the pieces. Do you start with a non-musical concept, such as an emotion or story idea that serves as a catalyst for the song? Or do you start instead with a melody or a melodic sequence?

It’s an interesting question. Because, actually, I always thought the big strength of instrumental music is actually to get rid of telling a story the way you do with a song with lyrics. And actually, for me, I’ve always considered instrumental music like a soundtrack of the movie that you, as a listener, can build from the impact and the feeling you have by listening to music.

When I’m starting an album, first of all, I never think about the stage and performance. That always comes later. And secondly, I’m more starting like a writer for a novel. You have the title, maybe, or you have the concept, and you say, “Okay. I’m going to try to follow that line.” Oxygène was of course [focused on] liquid air material. Équinoxe is more wet or liquid. My last album, Electronica was based on collaboration.

And the next studio album, Équinoxe Infinity has been announced today, so I can talk about it. I started with something I never did before. For the first time, I started from the artwork; I’ve never heard of people having done that, from my knowledge. I was quite happy with this idea, and said, “Okay. The artwork of the first album 40 years ago was really intriguing and great. And the creatures on the first Équinoxe album, what happened to these characters 40 years later, or even 40 years from now?” So, I started with this, and then starting doing the soundtrack of the artwork. And that’s just one example.

Yes, most of the time, I start with visual elements, or a concept from books from which I try to write to the soundtrack.

You have always embraced new technology, but more than many other artists, you seem to mix things up. You use old analog gear along with modern digital machines, sampling, plugins and so forth. Do you prefer analog over digital — or vice versa — or do you view them merely as different tools to achieve different goals?

So, these days, we have the luxury to be able to mix analog sounds, analog gear with digital and plugins. So, by the end of the day, it makes less and less difference, depending on the project. And I must say that I really love to mix analog and digital because they are very complementary, in a sense. It has not always been the case, but these days it is.

Do you still own some old vintage machines, like an Elka Synthex, or a VCS3 or a Mellotron?

Of course; I’ve got them all. I have a huge collection of synthesizers. I mean, probably one of the [largest collections]; I’m seriously competing with Moby, and Hans Zimmer and all these.

In all of your years working with synthesizers, have you ever found yourself frustrated by their limitations?

No. It’s a resource. I think the rudimentary frustration is having no limitations, and that’s not a paradox. It’s because limits and limitations force you to push the limits in yourself and your inspiration in yourself. And we know, after a while, that the only way of being different, having any kind of specificity is by who you are. It’s not the instrument you use; it’s the way you use instruments.

I remember when I was starting Oxygène, I had very, very limited equipment because it was too expensive for me, and not that many instruments existed at that time. So, I had this one string ensemble, one VCS3, one ARP 2600 and one broken Mellotron, and that’s it. And one Revox for making the delay and two guitar pedals for flanger and phasing, and that’s all. And you know, with this, I did something with literally only eight tracks. And a lot of people, when it had been released, considered it as SurroundSound, [even though] I did it with very limited equipment.

I see that if I would have had more equipment at that time, probably the results would not have been so extreme. I’m absolutely confident that limitations are very, very important.