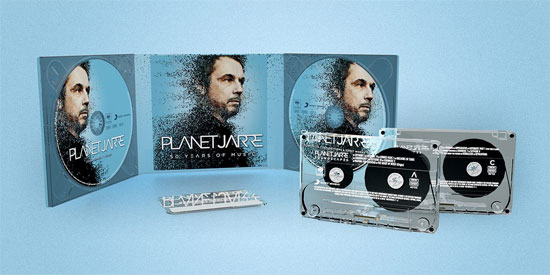 This may be a difficult question to answer. What do you see as uniquely French characteristics in your work?

I think it’s maybe not that difficult.

We should not forget that electronic music had nothing to do with the U.S. at the beginning. It has nothing to do with jazz, blues, or rock. It’s more coming from the continental Europe and classical music. It all started in the beginning of the 20th century with Luigi Rossolo writing the manifesto The Art of Noises in 1913, Léon Theremin inventing the Theremin in the ‘20s, and then Karlheinz Stockhausen in Germany. So, there’s tradition of avant garde and experimental electroacoustic music in France and Germany, mainly. And that was really, for me, the foundation of electronic music. And then later in the U.S. and in the UK, of course, you had major artists.

And what makes the specificity of my music as a Frenchman, as a French artist? I’ll tell you what makes [something] French: art forms specific in the movies, in paintings, in music, an impressionistic approach to any kind of art form. I think that, in that sense, people later on like Air — and even Daft Punk — all have a kind of more impressionistic approach to sound.

Where the Germans, for instance, such as Tangerine Dream and Kraftwerk, take more a kind of robotic, cold approach to electronic sound. And for me, I remember that when I did Oxygène, I was obsessed that no sounds would be repeated, all sequences should evolve constantly, every sound I would use should not be a copy of the previous one. And I think it’s this tradition from Ravel to Debussy. It’s all, I think, a very French style on that.

The reason why, probably, you never had really relevant or interesting French rock artists is because rock and roll or jazz is coming from something else, which is not naturally linked to France or Continental Europe. Where with electronic music, we have much more of an identity in those things. [That is] the reason why today the French and German scenes are so important and so predominant in the world in DJ and EDM. It’s a major genre for the continent.

I’m interested in the relationship, as you see it, between your studio recordings and live performance. Are concerts an opportunity to expand upon the original concept as recorded? Or are they a means to deliver the music the way it sounds on the record?

As I told you, when I’m starting a studio album, I never think about the performance of stage. [There was] only one case for an album of mine I wrote called Rendezvous where I really thought about the Houston concert and the stage. But otherwise, I’m not thinking about that.

For my next album, I really did it without thinking at all about how it could be onstage. But having said that, after, I always start thinking how I could do it onstage. And this is probably the reason why I went to find out different ways of performing electronic music in such a specific way by heavily involving visual and visual techniques. I always consider that. Electronic instruments are so different than rock instruments or classical instruments; [the latter are] especially designed for stage, where electronic instruments have been designed in laboratories and studios. And then we want to put them onstage, and that’s a total different story. So, to make the electronic music performance more sensual, more tactile, more understandable, more exciting, I need to use some visuals.

And also, I always thought electronic music — when I started, and even now, in a sense — is made for outdoors. I always thought rock and roll and jazz are made for cellars and darkness, and that way you can plug your body and with electricity to feel the power of the energy. And for me, electronic music has been always mixed with environment. This is the reason why I call my albums [things like] Oxygène. Because it has that outer space, but also the space around us.

When you look back upon your body of work, are there any projects where you think, “I don’t really like that one,” or “I wish I hadn’t done that one”?

You know, Bill, the reason why we are talking today and the reason why that also I’ve finalized my next two albums is because, precisely, for this project, I had always a mixture of my own feelings: a mixture of frustration and hope. The frustration that every album is not exactly what I wanted, and the hope that next time it will be better.

So, actually, of course, when I look back, I say, “Yes, I could have done this in a different way.” Like, “Now with the technology and tools we have for mastering and things like that, this one could be better.” But at the same time, I’m not the kind of guy listening to my music again when it’s finished. In a sense, when I’ve finished a project, it doesn’t belong to me any more; it’s up to the listeners to make them exist or not.