For the title track of To the Bone, Wilson wrote the music, leaving the lyric composition to Andy Partridge, formerly of XTC. “If I’m going to go into a collaborative process, then I want it to be just that,” Wilson says. “Compromise is the wrong word, but you give and take, and you allow for the other person, and their style, and their preferences, and their musical personality. The beauty of collaboration is that you do get that kind of melting pot of influences, inspirations, experiences and musical personalities.”

It’s impossible to predict where the creative restlessness that characterizes Steven Wilson’s work will lead next. But in the brief interview snippet on the Home Invasion Blu-Ray, he reveals that it’s a long-held dream of his to eventually score a film. Such a project seems like a natural progression for Wilson, whose work always conveys emotional content, with or without words. 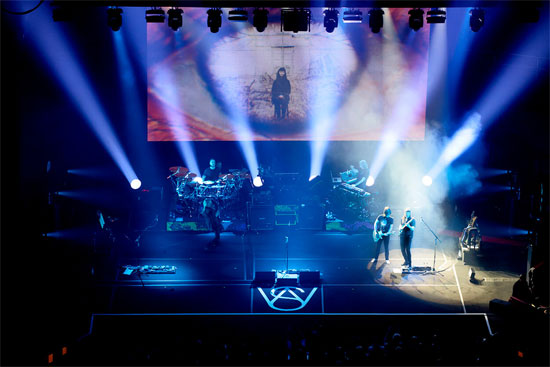 In late 2017, Wilson did provide the soundtrack to the video game Last Day of June, but he notes that collection of songs “was almost entirely drawn from existing material.” Wilson’s brief included creating instrumental mixes of songs that had appeared on his solo albums, and doing some editing to tracks. He admits that director Massimo Guaraini “knew he wanted the kind of music I was already making.”

A more straightforward film project would present a greater opportunity – and a more significant challenge – for Wilson. He’s clearly up to the task, should circumstances develop in that direction. “I would certainly relish the opportunity to work with a director – one who has a strong vision – on a movie,” he says. And it turns out that Wilson’s already staggeringly huge official catalog – 40-plus studio albums, more than 15 live albums, numerous compilations and limited-edition releases plus scattered EPs, singles – doesn’t even include some of his most commercially accessible work.

“The first ten years of my career, actually, I did a lot of music for commercials,” Wilson reveals. “It was one of the ways I kept myself going, because I was making records that nobody was buying in the early days.” Though he says that in some ways he found the experience soul-destroying, it helped him develop his songwriting skill.

Wilson also learned a lot about songwriting from picking apart and assembling classic albums. He’s an in-demand remix engineer, with more than 30 projects to his credit. Wilson’s work in this area breathes new life into 1970s records by Caravan, ELP, King Crimson, Gentle Giant, Hawkwind, Jethro Tull, Roxy Music, Steve Hackett and Yes. His list of 5.1 Surround remixes of ‘80s albums includes Tears for Fears’ Songs from the Big Chair, XTC’s Nonsuch and Skylarking and Simple Minds’ Sparkle in the Rain. For him, those projects represent “an opportunity to understand how those musicians made that music, and for that then to become a part of my toolbox, if you like, for creating my own music.”

Asked if there are other back catalogs to which he’d enjoy applying his remixing and remastering skills, Wilson says that as far as progressive rock, he’s probably finished. “I don’t think there’s anything left [to remix], really,” he says. “But I think there are certain catalogs that would sound wonderful remixed into multichannel sound.” He mentions some intriguing names, Prince, Bowie and Zappa among them. And Wilson would love to take a crack at Kate Bush’s recordings, but says that’s not likely to happen. “She’s not interested in SurroundSound,” he says. “I have tried. But not everyone is [interested], and that’s totally fair enough.”

The To the Bone tours began in late January 2017, and when complete will have taken Wilson and his band to North and South America, Great Britain, Europe, Russia, India, Israel, Japan, Australia and New Zealand; 140-plus dates in all. In a 2010 interview, Wilson and I discussed his prodigious output and busy schedule. “What I do barely feels like work to me,” Wilson responded. “People ask me, ‘Are you a workaholic?’ I respond that to be a workaholic, you’ve got to feel that what you’re doing is work. Making records, that’s not work. It’s fun, isn’t it?” He clearly feels similarly about playing shows; in the Home Invasion video interview Wilson admits that while he doesn’t consider himself a natural performer, he’s come to truly enjoy playing onstage in front of audiences.

But in an age where fans have come to expect an unprecedented level of interaction with their favorite artists, Wilson draws a sharp line. “The way the modern world is and the way the music industry is now,” he observes, “there is almost required a certain amount of access to personal life, simply in order to promote your work.” He says that he embraces that reality “a little bit. If you don’t make yourself available on social media, then to a lot of people, you simply don’t exist.”

Wilson has his own Instagram page, which he maintains himself rather than handing the task off to an assistant or label employee. “But I don’t post a lot there,” he admits. “And I certainly don’t post pictures of me and my family having breakfast, which some people do.”

Wilson aims for a balance between accessibility and privacy. “I do have a line which I won’t cross in terms of my personal life,” he says. “So it’s been a bit of a learning curve, a bit of a try-it-and-see. I try and keep my personal life still very private, but also give the fans the sense that I am a human being and that I am … kind of … interacting with them.” He concedes that there’s no right or wrong way of addressing this subject, and that ultimately it’s up to each artist to sort out a level of fan access that feels right.

While some artists grant unprecedented access to their followers, Wilson notes that refrain from doing so. “The Radioheads and [Pink] Floyds of this world still pretty much have that mystique about them, because they don’t give the fans any access at all,” he says. He agrees that artists on that level of fame don’t exactly need to open up. “They’re massively successful,” he says. “But someone like me who’s not massively successful, I guess I do still need to make myself available to the fans to an extent.” In the meantime, the man referred to as “the most successful British musician most people have never heard of” is staying true to his musically restless spirit while writing pop songs that are earning him a larger audience.