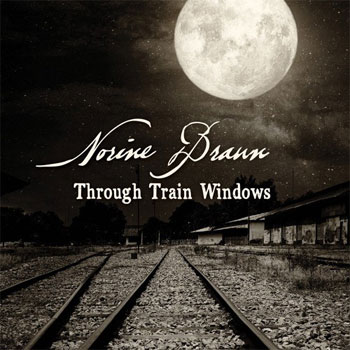 There’s long been an appealing character to songs inspired by travel. Award-winning Canadian singer-songwriter Norine Braun’s Through Train Windows is the latest entry in that tradition; it’s a collection of songs that came about through the artist’s rail travel across her native country as part of the “Artist on Board” program. Intentionally removed from at least some modern conveniences/trappings (namely a wi-fi connection), Braun allowed herself to open up to other things—people, nature—for inspiration. The song titles more than hint at the subject matter: “I’m Going Home,” “Heading Up North,” “I’m Moving On.” It might be slight overstatement to characterize Through Train Windows as a concept album, but there’s a thematic unity to these folky (and folk-rocky) songs that makes them feel like a cohesive whole. Opener “Sleeping Buffalo” feels like an introduction; I kept waiting for the intro to end and the more upbeat part of the song to start, but it never did. To be fair, all I had to do was hang on for the next tune. The breezy, good-timing Americana of “I’m Going Home” delivers on that score. “Jerkwater Town” has a moody, minor-key vibe and a bluesy feel that pulls the album in a rock direction, though by its end the tune has become a bit repetitive. Huggybear Leonard’s insistent harmonica helps keep that whole on-the-rails vibe in the forefront of the listener’s mind. The stately, elegiac “Crosses and Sweetgrass (Salvation) shows a side of Braun not displayed elsewhere on the record. As a whole, Through Train Windows has a character not far removed from Indigo Girls, albeit with a distinct Canadian sensibility and perspective.