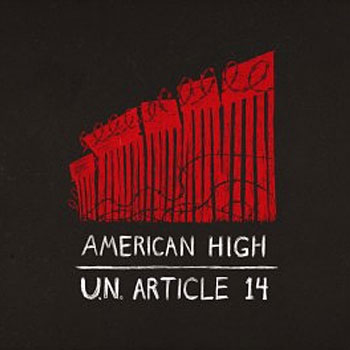 For a quick bit of context, “Article 14” refers to a section of the United Nations’ Universal Declaration of Human Rights stating that people should be free from persecution. (It’s perhaps worth noting – and more than a bit troubling – that a 2004 court case in the United States concluded that the 1948 declaration isn’t binding on the USA. Anyway … to the music.) You may have guessed that this is a politically-themed album, and you’d be sorta right. American High is a Sacramento, California based group. And on its second album the group combines a number of stylistic elements to craft an album that will have listeners bopping along even if they don’t pick up on the lyrical messages. The group’s tight and high vocal harmony is a primary selling point, but the muscular instrumental backing that chugs along under it provides plenty of energy. The most obvious musical touchstone here is Green Day, but American High seems possessed of an even stronger pop sensibility. “Cheye Calvo” adds what can only be called world-music elements into an otherwise straightforwardly pop-punk ditty. These guys have catchy musical ideas, and they’re expressed with more stylistic variety than one might expect. A cheery love song, “Fairfield, Ca.” is a highlight of the eight-song set. By modern-day measure, U.N. Article 14 ought to be classified as an EP due to its brevity. But quality wins over quantity every time. A fun listen.