No Way Out: The Curious Case of The Chocolate Watchband (Part One)

(Note: An edited version of this feature appeared in Record Collector Magazine.) 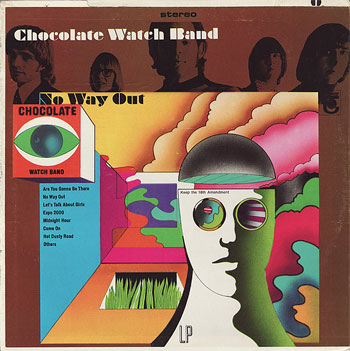 Throughout the history of popular music, certain managers, producers and promoters have been wiling to engage in a kind of sleight-of-hand to further their commercial prospects. If that meant sending a bogus version of a group out on the road; they’d do it: rock’s history is rife with tales of ersatz Zombies, Moby Grapes and Fleetwood Macs. There’s a long list of completely fabricated acts: the Banana Splits, the Archies and even the Hardy Boys all made albums. And when real groups like the Beach Boys, Paul Revere & the Raiders and the Byrds were busy playing actual shows, their producers weren’t above getting the ball rolling, enlisting studio players to cut basic tracks for those acts’ next hoped-for hit songs.

But the idea of a studio aggregation recording complete songs, and then releasing those tracks on a record right alongside songs by the actual group … well, that seems a step beyond. Right? Not if you were Ed Cobb, the producer who worked with the Chocolate Watchband, a rock group that got its start in 1965 just outside San Jose, California.

In one sense, the history of the Chocolate Watchband is a very complicated tale. But from another perspective, it’s quite simple. The original lineup came together in Los Altos, California, largely playing cover tunes. Within a year, that group had dissolved, leaving behind no official recordings. In 1966, founding member and guitarist Mark Loomis put together a second lineup of the band, with only drummer Gary Andrijasevich returning from the original group.

And it was this second configuration – Loomis and Andrijasevich, plus bassist Bill Flores, guitarist Sean Tolby and singer Dave Aguilar – that would build a following. Aguilar—who spent most of the years between 1967 and 1999 completely out of music, working in the aerospace field—recalls how he came to join the group. “I was in a different band, and one night, I noticed a couple of guys watching me from the audience,” he says. “One was Mark Loomis and the other was Sean Tolby. They were looking for a lead singer, and they asked if I was interested in joining a new band.” He was.

The band’s set list in 1966 featured a good bit of British music. “We really tuned into the Kinks,” Aguilar recalls. “We were doing ‘See My Friends,’ and ‘I’m Not Like Everybody Else,” a B-side that people in the States had not heard.” Watchband shows also featured the Yardbirds’ “Mister, You’re a Better Man Than I.” Aguilar notes that today, the Chocolate Watchband still includes those tunes in its live set. “We’ve revived them from the earliest days of the real Watchband.”

Aguilar pauses to let his point sink in. “When I say ‘the real Chocolate Watchband,’ there was really only one Watchband that broke out, that the world knew,” he says. “I listen to historians who want to go back to the first day that the band came together. I think it’s interesting, but in reality, they accomplished nothing. They didn’t record; they just did covers.”

The real group – as Aguilar describes it – quickly developed into a hard-edged unit with impressive stage presence and musical chops. “I could relate to the very early Beatles in Germany and very early Stones, in that we were a cohesive group even though we’d been together for a very, very short time,” Aguilar says. Within a month or two of forming, the Watchband with Aguilar found itself opening for Frank Zappa’s Mothers. 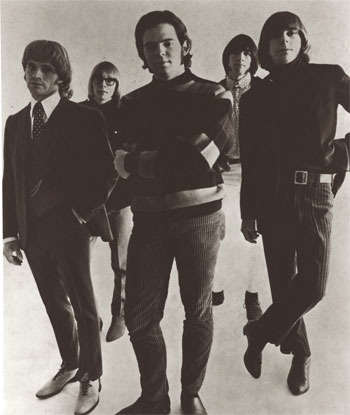 “It was a tryout,” Aguilar explains. “We were approached by Bill Graham to play at the Fillmore. Graham would book a local band to see if they had the caliber to play with the big guys.” The bill that night – June 25, 1966 – also featured comic Lenny Bruce in what turned out to be his final performance. No recordings exist of the Watchband’s set that night, but Aguilar says that the group was powerful onstage.

“When I talk to younger people,” Aguilar says, “I tell them, ‘Understand that sometimes you’re going to come together with other talented people, and you’re going to have an incredible power. It can get out of control and be misused, but it can also be focused like a laser in doing what you want to do.’” That was the mindset of the Chocolate Watchband in those days, he says. “What an incredible feeling to walk out onto a stage and know you command it, it’s yours, and you’re about to change history with the music that you play. And that’s how we felt as young kids.”

The Fillmore show was a success, and Graham wanted to sign the Watchband to a management contract. But the group had already signed with another manager, who brought them to producer Ed Cobb. It’s intriguing to speculate on how the band’s subsequent path would have been different had they went with Graham. “Well,” Aguilar says, “we would not have had access to some of the songs that Cobb wrote for us. So that’s a negative.” But he notes that Graham’s stated plan for the group would have raised its profile.

Graham told Aguilar, “I want to shuttle you between here and the new Fillmore on the East Coast.” Aguilar says, “We would’ve been playing every weekend with the [Grateful] Dead, the [Jefferson] Airplane, Carlos [Santana] and Janis [Joplin].” And he suggests that experience “would’ve kicked me in the butt to start writing more songs, so we would have had more original material.” That, he suggests, might have helped prevent “the bullshit that was pulled on us by the record producers: sticking other songs – and other people – on our albums.”

Aguilar believes that when the label and management promoted the Chocolate Watchband, they did so in all the wrong ways. “We were considered a black group because of our name; that’s what some idiot in upper management thought,” he says. Bizarrely – considering that the Chocolate Watchband was an exemplar of what is now known as protopunk – the band was features on bills with the Coasters.

But even those dates didn’t take the Watchband outside of its native California. “We never made it out of the state,” Aguilar says. “ All we did was play up and down from Hollywood to San Francisco to Northern California.” The group regularly drew large crowds when booked at the Coconut Grove dance hall in Santa Cruz, California. “Capacity was 500,” Aguilar says, “but there would be 800, 900 kids up there every time we played.”