As the title of yesterday’s feature indicates, Alice Cooper is the Grand Old Man of shock rock. Nearly a half century after the release of the debut album Pretties for You, Cooper remains busy as ever; he’s been recording and performing with supergroup Hollywood Vampires, and his most recent album, Paranormal, finds him reuniting with the original Alice Cooper Group on a few tracks.

The members of the lineup that gave us “School’s Out,” “Elected” and Mo More Nice Guy” parted ways in 1974, but on new tracks “Genuine American Girl” and “You And all of Your Friends,” it sounds like they never left. On the eve of the latest tour leg in support of Paranormal—Cooper’s most commercially successful release in years—I spent a few moments in conversation with the shock rock pioneer. 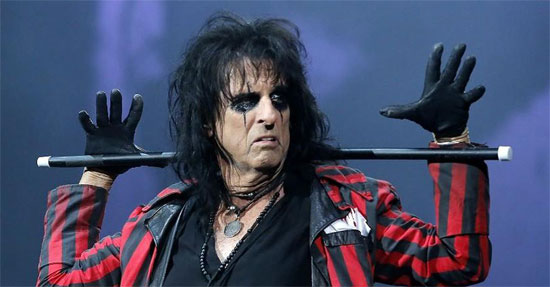 You hadn’t played with the members of the original group in years. How and why did you decide to get back with them for the one-off performance and the studio tracks that are included on Paranormal?

You know, it’s funny. With the original band, when we broke up, we never broke up with any bad blood. There were never any lawsuits or anybody angry with anybody. It just was sort of a natural separation. So, Dennis [Dunaway, bass], Neal [Smith, drums], and I always stayed in touch with each other. Mike [Bruce, guitar] was hard to find because he moved to Mexico for a while, and Glen [Buxton, guitar] had passed away.

So, putting the original band back together was getting a little harder, and Mike was having some physical problems where he wouldn’t have been able to tour, I don’t think. But it wasn’t really much of a stretch when we did find Mike and I said, “Let’s put the original guys back together, write some songs, and see what it sounds like in the studio.

“But let’s not overdub anything.” I said. “I want it to sound like the original band live.” So, when we went into the studio, we played like that and it sounded great. The coolest thing was that you couldn’t hide the fact that it was the original band.

We did the same thing with Hollywood Vampires. When we were in Berlin, we did a couple of tracks and we cut it all live in the studio. In fact, we cut one track live to vinyl! But there’s only one vinyl copy of it. I listened to it and it sounded great, so I said, “Hey, I want one of these.” “Well, we have to do it again, then. They don’t make any copies of it.” So, Johnny [Depp] got it.

Paranormal also found you working, once again, with Bob Ezrin. Was it like old times working with him again?

Well, I never stopped working with Ezrin. Bob and I are so connected at the hip that even when I’m working with a different producer, I’ll write maybe five or six songs and I send them to Bob. And then Bob kind of goes through them and says, “Okay. This is good, this is good, I don’t know where you’re going here, you need a better bridge here, this chorus is weak at the end,” and he sends them back. And then I rewrite them! So, he’s sort of my editor. It’s extremely natural to be working with him. He’s sort of my George Martin.

How would you characterize the difference, collectively, between the Paranormal songs and what you’ve done in your last few albums?

Bob and I like to mix up the musicians a lot. Because when you’re doing that, all of a sudden, you start adding a lot of different flavors. So, using U2’s drummer brought something to it that was really different. He doesn’t go to the high hat and snare; he’ll go to the tom tom and and high hat, and it really creates something that you can’t just get out of another drummer.

And then you add a different guitar player, and he brings in a different flavor, and you let that turn into what it’s going to turn into. This combination of players on this album just happened to spark something different; you can’t put it into words. There’s an old saying that talking about music is like dancing about architecture. It’s very hard to explain why that works and this doesn’t work. You just sit there, and you listen to it, and you look at each other and go, “Well, that works great,” and then you don’t question it. You just let it go.

You brought theatricality to rock in a way that very few before you had. Following you, there have been much more extreme acts: Marilyn Manson a couple decades back, GWAR and so on. How much do you think artists like them owe to you for pushing the boundaries?

Oh, I mean, they’ve all come to the shows. They’ve all done their “I’m not worthy” thing.

Now, Kiss took it in a different direction, and Marilyn Manson definitely took it into a much more high tech, cerebral type of place. Slipknot even added a bit of rap to it, and then Rob Zombie had his version of it. But yeah, they’ve all come to me and said, “When we were kids, we saw what you did and it inspired us to take it in a different direction.” And I said, “Well, that’s great.” I almost look at it like a surrealistic movement where Salvador Dali started something and then a bunch of other artists saw that and said, “Well, let’s do our version of that.”

I never felt I was really in competition with David Bowie or GWAR. GWAR had a great sense of humor; I went to their factory and saw how they built all their costumes and everything. Rob Zombie’s one of my best friends. Marilyn Manson, even though we don’t see eye to eye on any religious level, he’s still somebody that I tour with and I really get along with. He’s a very creative, very stylish guy.

At the end of an evening, how would you characterize the difference between a good show and a great one?

I’ll tell you the truth. I surround myself with the very best players. Two of the people in my band got voted best in their field: Glen Sobel got voted best drummer in rock and roll, Nita Strauss got voted best female guitar player in rock and roll. And it shows me that I have good taste in picking people. Once you get these people in the band, it’s a show unlike any other. Once it starts, it moves like a freight train; every single song has its own theatrical signature. And in the end, the audience is going to love it. Even if they hate you, they’re going to love the show because it never gives you a chance to not like it. And that’s great.

We have what we call fliers, where a great show becomes an incredible show, when you sit there and you go, “What was that?” Even when somebody would make a mistake, it was a mistake that actually works. So you say, “Remember that, when you fell over that amp? Yeah, do it again tomorrow night. They loved it!”