No Way Out of Here: The Unicorn Story (Part Two)

David Gilmour wasn’t a complete novice in the ways of the studio. Then 27 years old, the guitarist had already co-produced six albums with Pink Floyd; he also handled production duties for the challenging sessions that yielded much of the material on Syd Barrett’s two solo albums. And his ear was already legendary.

Martin recalls a story told to him by one of Pink Floyd’s roadies. “He said that David could stand on a stage with a big rack of maybe 50 speakers behind him, and he could pick out where one speaker had gone bad,” Martin says. “He could say, “That one’s gone.’”

The experience of recording those demos was sheer pleasure, Martin emphasizes. “David is such a nice guy.” And his easygoing nature extended to his role as producer. “If he thought you didn’t do something right, he’d tell you, but he didn’t force ideas on us.” Not long after a day of sessions was completed, Gilmour offered the band a second day of recording. 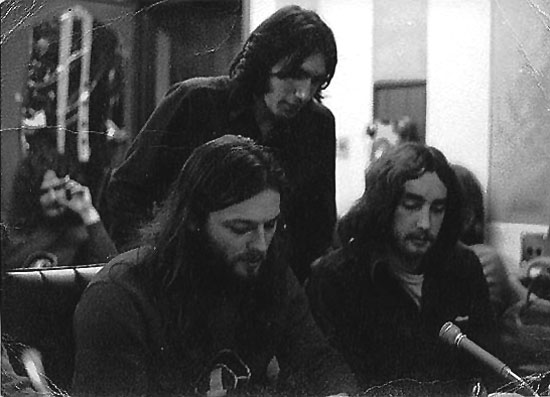 Once the demos were seemingly finished, Gilmour rang the band up yet again. Martin recalls what the Pink Floyd guitarist said: “I’ve just bought a pedal steel guitar on my last American tour. Do you mind if I dub some onto some of your songs?” Once again, the group readily agreed. But Gilmour was careful not to disturb the band’s already carefully-crafted sound. “If it had been down to him, he would have made our music sound ‘bigger,’” Martin says, “but he more or less let us get the sound we wanted to get.”

And when Unicorn came around to listen to the finished tapes, Gilmour had another surprise for the band. “I played the tapes to my manager,” Martin recalls him saying. “And he’d like to manage you.” The group signed with Steve O’Rourke; he and Gilmour put up the money to record a proper album. “We went into Olympic Studios in London and recorded Blue Pine Trees,” Martin says. “And then Steve solid it to Charisma Records in England, Capitol in the United States and EMI International for the rest of the world.”

Prior to making albums, Unicorn played what Martin calls apprenticeship-type gigs. “We started playing in youth clubs, and village halls, and the usual,” he says. Once the group’s first album came out, the band graduated to playing at universities, and as the support act for more well-known groups. “And then we went to the States,” Martin says, “doing dates with Fleetwood Mac and then with the Doobie Brothers.”

But the latter opportunity didn’t last long. “On the second gig—I think it was in Des Moines—we did the soundcheck, the audience were in, we went back to our hotel,” Martin recalls ruefully. “We came back in time for the show. We were getting tuned up and ready to go out on the stage, and their manager came in. He said, ‘Tom Johnston has just o.d.’d. The tour is off.’”

But better gigs were to come. “We got to gig with Billy Joel at the Cellar Door in Washington, D.C.,” Martin says. “We played with Styx, and we really got lucky joining Linda Ronstadt in Texas; she was touring [in support of her] Heart Like a Wheel album.”

The band members were happy with Blue Pine Trees, and when it came time to make a third album, they once again worked with Gilmour as producer. Released in 1976, Too Many Crooks featured ten original songs. One of several album highlights is “No Way Out of Here,” a song that so impressed the band’s producer that he would cover it for his self-titled 1978 solo debut album. Like the albums before it, Too Many Crooks received positive critical notices but sold only modestly.

As a result, the record company exerted some pressure during the making of Unicorn’s fourth album, One More Tomorrow. Sessions had begun (once again with Gilmour) at Pink Floyd’s brand new studio, Brittania Row. “We were the first people to use that studio,” Martin says. When the band presented the finished tapes to Harvest—the EMI division that now oversaw Unicorn’s releases—the label executives were not impressed. “At that time, punk and the new wave were coming,” Martin explains. “We couldn’t have been more unfashionable. They had to put the album out because they were contracted to.”

But the suits at Harvest thought the album “needed a single,” so Unicorn was sent back into the studio, this time with producer Muff Winwood. Martin notes that as a producer, Steve Winwood’s brother “had had a massive hit with ‘This Town Ain’t Big Enough for Both of Us’ by Sparks.” For his part, Martin was willing to give it a try with Winwood. “But Ken, who wrote the stuff, and Pete, who sang most of it, were a bit worried,” Martin recalls. “Because he had also produced the Bay City Rollers.”

When released, 1977’s One More Tomorrow included Winwood-produced tracks that got some airplay on Capital London radio. One was “Slow Dancing,” a Jack Tempchin song that would see almost simultaneous release by Johnny Rivers; he scored a U.S. Top 10 hit with the song.

“It got Record of the Week on Johnny Walker’s show on BBC radio,” Martin says. “After that, we did a few more gigs, and then one day they just called us in the office and said, ‘Sorry, guys. We can’t do any more for you. Your music is too unfashionable.’ And that was it. It all came to a halt in ‘77.”

Looking back, Martin is proud of all of the band’s releases: the four 1970s era albums, a 2002 collection of 1977 demos called Shed No Tear, and the new Laughing Up Your Sleeve, an Omnivore Recordings release of those original 1973-74 demo sessions with David Gilmour. “Though I really like the three albums we did with Dave Gilmour, there’s something about the rawness of these demos,” Martin says.

Apparently, David Gilmour does tend to stay current on his audio technology. As the release of Laughing Up Your Sleeve approached, Martin reached out to his old friend (who also wrote a short essay for the new album) and offered him a copy. He laughs when he recalls giving the guitarist his choice of CD or vinyl. “’Don’t send me bloody vinyl!’ Those were his words.”