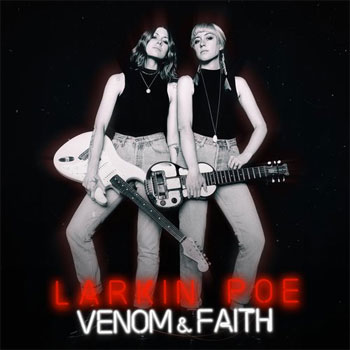 On KIN, their 2014 debut as Larkin Poe, sisters Megan and Rebecca Lovell debuted a modern roots style that owed a debt to blues but didn’t fit comfortably into the admittedly wide framework of the genre. Stinging slide guitars provided a sonic connection to the tradition of classic electric blues, but songs like “Jailbreak” had a production aesthetic that placed the music more on the rock side of the musical continuum.

The balance has shifted toward blues (of a sort) with Venom & Faith. The opening track on the duo’s new album, “Sometimes” sounds like a field holler filtered through a backwoods gospel church. Modern production flourishes bring the song back into the 21st century, but as its heart — in style and intent — the Lovell sisters are specifically aiming at the vibe of the previous century’s blues traditions.

If the whole album sounded like that first tune, Larkin Poe might be open to changes of cultural appropriation. But as the album unfolds, the group reveals a more nuanced take on the blues. “Bleach Blonde Bottle Blues” is all ‘70s rock ‘n’ roll swagger, but the arrangement is anchored in the blues. Rebecca Lovell’s lead vocals can occasionally come off slightly mannered, but there’s no denying her skill at running up and down the scale. And she does it in a way that serves the songs, that isn’t showy for its own sake.

Guitarist Tyler Bryant guests on the country blues “Mississippi,” and the song’s stinging slide work is hypnotic and inviting. As on a number of other Venom & Faith tracks, here Larkin Poe conjures a vintage feel by dialing back the drum kit in favor of handclaps and foot stomps. “California King” provides some of the album’s most interesting instrumental textures, with banjo and electric guitar playing off one another. Venom & Faith often feels like an Americana-flavored musical travelogue. But it also features more explicit nods to blues history in songs like “Hard Time Killing Floor Blues.”

The album ends with the meditative “Good and Gone,” one of few tracks on Venom & Faith that employs keyboards. A Hammond organ is placed deep in the mix, and for most of the tune it’s used largely as a drone, but its presence is a sign that Larkin Poe is careful to avoid painting itself into a stylistic corner.